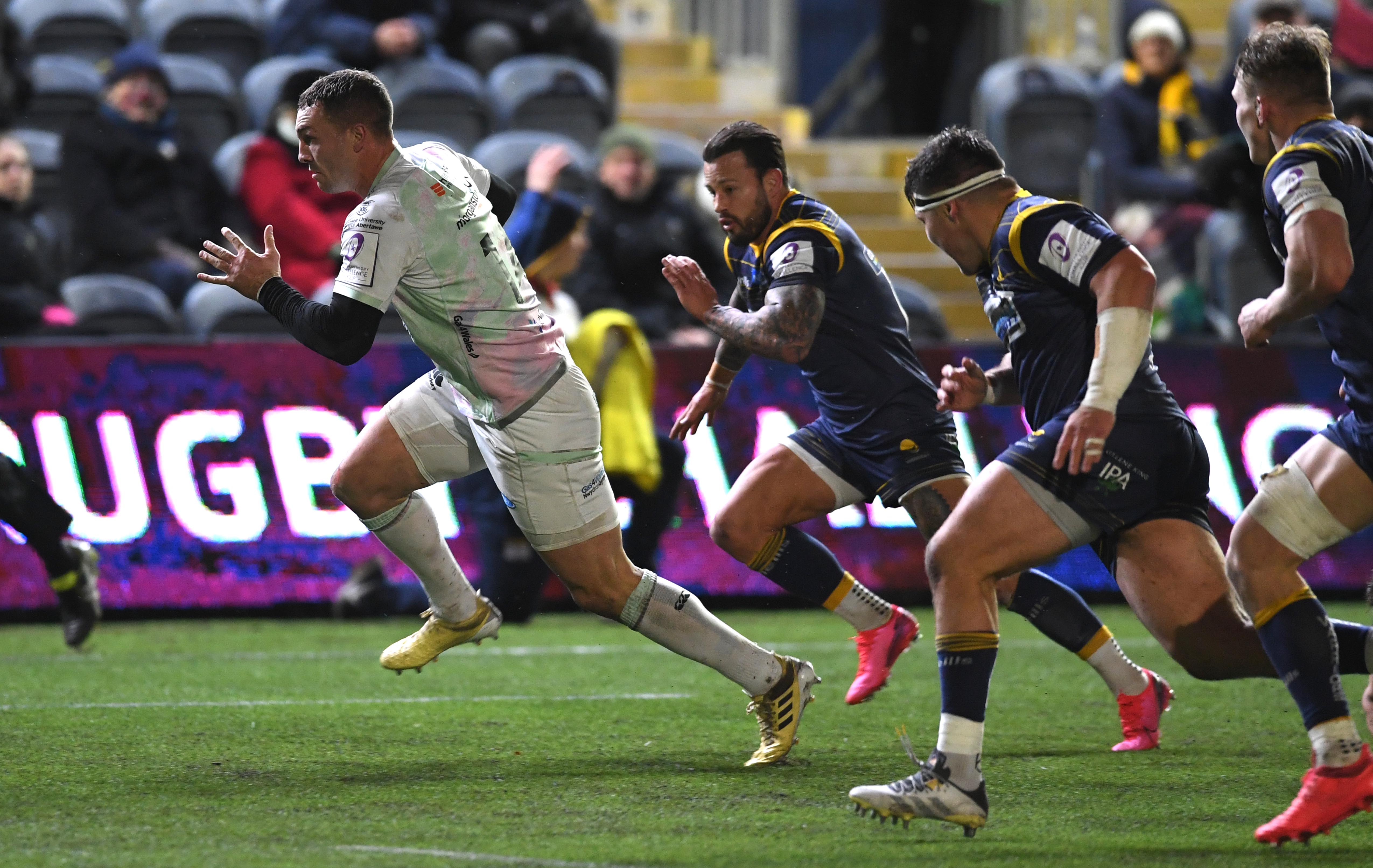 Ospreys supporters enjoyed a thrilling encounter in Sixways. Despite the downpour, eight tries were scored in total with momentum swinging like a pendulum between the two teams, and the lead exchanging hands several times.

It was the Ospreys who started stronger of the two teams, with an aggressive defence and a lively attack yielding two kickable penalties for outside half Stephen Myler. However, the hosts struck back with two tries in quick succession through international centre Ollie Lawrence and fullback Melani Nanai. The lead was only briefly held, before a penalty try off the back of an Ospreys rolling maul gifted the visitors an instant seven points. Moments later, Ospreys hooker Sam Parry took a second try from the back of an advancing maul and giving his side a bit of breathing space ahead of the half-time break.

Shillcock added a penalty in early in the second half before converting a try from Billy Searle, taking his side into a narrow lead. Worcester’s Ted Hill landed a second body blow when he crossed a few minutes later, with the following conversion taking the hosts into an eleven-point lead just before the hour mark. It was a daunting task ahead for the Ospreys, but replacement back row Morgan Morris had an inspiring impact on the game. Just five minutes after he took to the field, Morris claimed a try, bringing his team back within a score. He then earned three back-to-back penalties at the ruck, with the first leading to winger George North’s try, and the other two allowing Myler to extend the lead beyond Worcester’s reach.

Worcester conceded a series of early penalties and Myler put points on the board for his team with a penalty goal after just a few minutes.

Ospreys centre Kerian Williams punched a hole in the defence which winger Mat Protheroe exploited, scything his way deep into Worcester’s half. The attack was cut short but an infringement at the breakdown afforded Myler an opportunity to double his tally, which he took with clinical efficiency.

A powerful run from Worcester’s Lawrence saw the centre barrel through several tackles and plant the ball an inch over the line for the hosts’ opening try. The conversion was taken by Shillcock, which took his team into a one-point lead.

The hosts enjoyed a momentum swing following Lawrence’s try, and after the ball popped out the back of a ruck, quick hands to the left wing awarded fullback Nanai with an unopposed run to the line.

The visitors in white responded with a try borne from brute force. A maul from the lineout rumbled to the line and referee Nika Amashukeli deemed that Worcester had deliberately collapsed the maul and awarded Ospreys a seven-point penalty try.

The Ospreys pack stamped their authority just a few minutes from half-time, with none other than Sam Parry claiming the spoils as the big men marched Worcester back over their own try line. A rare miss from Myler, but the Ospreys’ second try meant they secured a six-point lead at the interval.

Eight minutes into the second half, Dan Evans was penalised for illegally making progress on the ground, and Worcester’s Shillcock clawed three points back for his side, bringing the hosts back to within just three points.

Worcester struck a blow with their third try a little under five minutes later; a fine angle from former Ospreys, now Worcester centre, Ashely Beck, set up replacement back Billy Searle for a fine. The conversion was knocked over and Worcester went back into the lead.

A blunder at the back of the maul on Ospreys’ own line gifted Worcester back row Ted Hill with the easiest of tries, and Worcester leapt further ahead, claiming the bonus point at the same.

North enjoyed a gallop along the right wing and caused all sorts of chaos in the Worcester defence; and when the Ospreys tried to recycle the ball at pace, Worcester’s replacement prop, Ethan Waller, played the ball from an illegal position and earned himself ten minutes in the sin bin.  A penalty for the visitors, and with them trailing by eight points, the decision was to kick to the corner and go for a try.

The lineout went awry, however, and the opportunity evaporated as Worcester cleared their lines and regained possession inside Ospreys’ half.

A blistering run from Ospreys fullback Evans, hurling Beck to one side for good measure, set up Ospreys for another assault on the line and a powerful charge for the line from number eight Morris ended with the replacement back row over the line, ball in hand. Myler converted and the Ospreys found themselves only four points adrift with less than 12 minutes remaining to play.

As Worcester pressed Ospreys’ 22, Morris earned an outstanding turnover penalty, granting Myler an opportunity to go to touch. From the lineout, North took the ball flat and made a trademark charge ahead, cutting through three would-be-defenders to score a wonderful solo try in the corner. Myler split the posts with his conversion and Ospreys retook the lead with a few minutes remaining in the game.

Morris again made a crucial intervention, earning another penalty at the breakdown; this time, however, Myler kicked for goal and added three points to the score, extending the lead to six points. Worcester were still within a converted score, however, with two minutes left to play.

For a third and crucial time, Morris secured a penalty at the breakdown, earning his side a penalty. The result was the same, with the ball sailing from the tee to between the posts, nudging the Ospreys out of Worcester’s range. The clock turned red, and the game was all but won.

Worcester still had a losing bonus point to play for, and they had a late opportunity to earn it with a scrum just outside Ospreys’ 22; but another intervention at the breakdown and the Ospreys kept Worcester out, denying them any additional points from the game.

A famous victory for the Ospreys, who have now claimed two bonus point victories in two games so far in the European Challenge Cup.