First agreed between the Welsh Government’s tourism agency and Swansea Stadium Management Company (SSMC) Ltd in 2011 when the Swans first won promotion, the partnership has been in place ever since and is based on the global profile that the Premier League delivers for the city, and Wales, and the Ospreys' international standing as Wales leading rugby region and four times PRO12 champions.

Matthew Daniel, Operations Manager at SSMC Ltd, said: “We are extremely proud to work with Visit Wales for yet another season. It is a mutually beneficial partnership with a very strong brand that will help us to promote Wales to the wider world.”

Involving both Swansea City AFC and the Ospreys, the deal sees the continuation of the Croeso Stand – to welcome visiting sports fans to both Swansea and Wales. 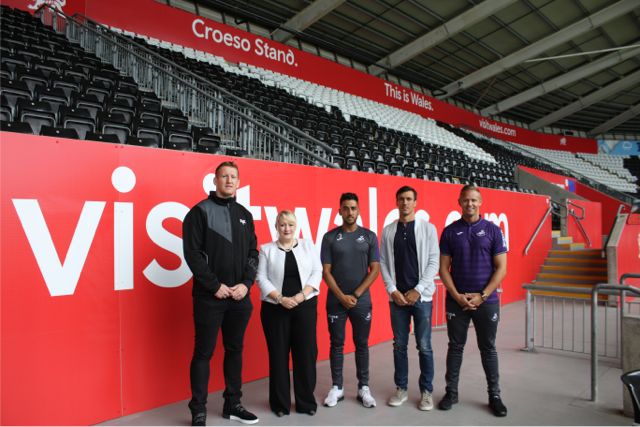 It is hoped that the renewed partnership will promote the country to a global audience of sports fans.

Rebecca Evans, Minister for Social Services and Public Health, who was present for the photocall, said: “The passion, pride and spirit of the Welsh football team and the ‘Red Wall’ of Welsh fans during Euro 2016 were inspirational to watch.  Our players and fans were fantastic ambassadors for our country and for football, hopefully encouraging more people to visit Wales and inspiring the next generation to take up sport and get active.”