The Ospreys came out on top in the Boxing Day derbv at Parc y Scarlets by the narrowest of margins after a pulsating 80 minutes of rugby.

Tries from Hanno Dirksen and Alun Wyn Jones meant that it was all square at 20-20 at half-time, but after the Scarlets had gone six points clear in the third quarter the decisive score came from Eli Walker, Biggar’s conversion putting the Ospreys in front for the first time.

The fourth try never came and the Ospreys found themselves clinging on in the final minutes, Steven Shingler missing a kick at the death that would have pinched the win for the home team.

It was a sixth Ospreys win in seven Boxing Day derbies between the two sides, and means the South Wales Evening Post Challenge Cup is heading back to the Liberty Stadium after living in Llanelli since the region was defeated on their last visit across the Loughor at the start of January.

A fourth straight PRO12 win means the Ospreys are now well back in contention for the top six and a spot in next season’s Champions Cup. 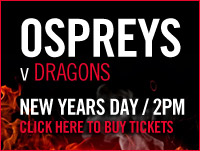 The Scarlets were fired up by a sell out crowd and went at the Ospreys from the first whistle, the opening exchanges played out almost exclusively in the visitor’s half.

It was the home team who opened the scoring on 10 minutes, flanker John Barclay with the first try of the afternoon. It stemmed from a quick tap and go by Aled Davies on halfway, the Ospreys defence always on the back foot after the scrum half’s break.

Rob Evans was hauled down close to the line and with the defence struggling to get across it was spun out to the right from where Barclay had a simple run in to score. Aled Thomas converted.

Within three minutes the Ospreys were on the board after their first venture into opposition territory, Biggar making no mistake from just outside the 22 after the Scarlets were pinged for holding on.

The hosts struck straight back, Thomas with the penalty from close to halfway following an offside call against Josh Matavesi as he chased Biggar’s little dink over the cover.

It was very much tit-for-tat and Biggar was successful again on 21 minutes from a similar position to his first kick, the scoreboard reading 10-6 just past the quarter point of the match.

Just two minutes later Thomas added another three for the Scarlets, from in front of the posts, after an Ospreys offside.

As the half hour approached the Ospreys were enjoying their best spell and were rewarded with their first try. It was Biggar who put his team up in the corner with an excellent kick from hand in open play, and the Ospreys kept up the pressure when Alun Wyn Jones charged down Davies’ attempted clearance from the resulting lineout.

Awarded a scrum as the chargedown was in goal, it was Dirksen who cut a great angle to collect Tom Habberfield’s feed inside and the winger was driven over the line for his first try of the season. Biggar converted and it was all-square at 13 points each.

The next score of an entertaining contest went the way of the home team after huge pressure on the Ospreys line. Jack Condy was held up inches short but scrum-half Davies was alert and squirmed over from close range. Davies converted and the Scarlets were seven clear again.

The Scarlets were reduced to 14 just 30 seconds before half-time, Jake Ball shown yellow for a late and off the ball hit on Biggar, and the Ospreys took full advantage of the extra man to grab try number two before the two teams went in for the break, the skipper reaching over to ground it after Ben John had been stopped a couple of metres out.

Biggar added the extras and it was all-square at the interval.

Thomas nudged the home team back in front inside two minutes of the restart after Dan Evans was pinged for holding on as he found himself isolated just inside his 22, an ugly penalty kick just scraping the inside of the post and falling the right way despite looking simple enough.

The Ospreys were still three behind when Ball returned to the action but a great half break from Habberfield put them in a good position as they looked for a third try. The forwards took their turn and the Ospreys were inches from the line following a series of pick and gos, only for Matavesi to knock on under the posts as they finally looked to move it.

The centre was then involved the other end, penalised for a dangerous tackle on Steffan Evans that allowed Thomas to successfully kick another penalty to go six ahead.

The Ospreys took the lead for the first time just a minute before the hour after a Justin Tipuric tackle on halfway allowed quick turnover ball. It was the unlikely figure of Dmitri Arhip who went haring down the touchline, from halfway to 22, before slipping a lovely pass to Walker on his outside who was left to race over for his sixth of the season.

Biggar’s conversion meant that the Ospreys led by a single point, but that break was Arhip’s final involvement as he limped off gingerly holding his hamstring.

The fly-half then had the chance to add another three following Scarlet interference on the ground but this time he pulled his kick to the left of the sticks.

Inside the final 10 minutes it was in the balance, the Ospreys holding the narrowest of leads as the Scarlets looked to apply pressure and only the ref’s whistle stopped Rhodri Williams going for the line after his side had illegally won turnover ball on the ground.

With just a minute to go, Ospreys hearts were in their mouths as Dan Lydiate’s off the ball tackle on Aaron Shingler gave his brother one last shot at goal to win it but, thankfully, he was unable to find the target, sparking celebrations from the Ospreys players under the posts as Nigel Owens blew for time.