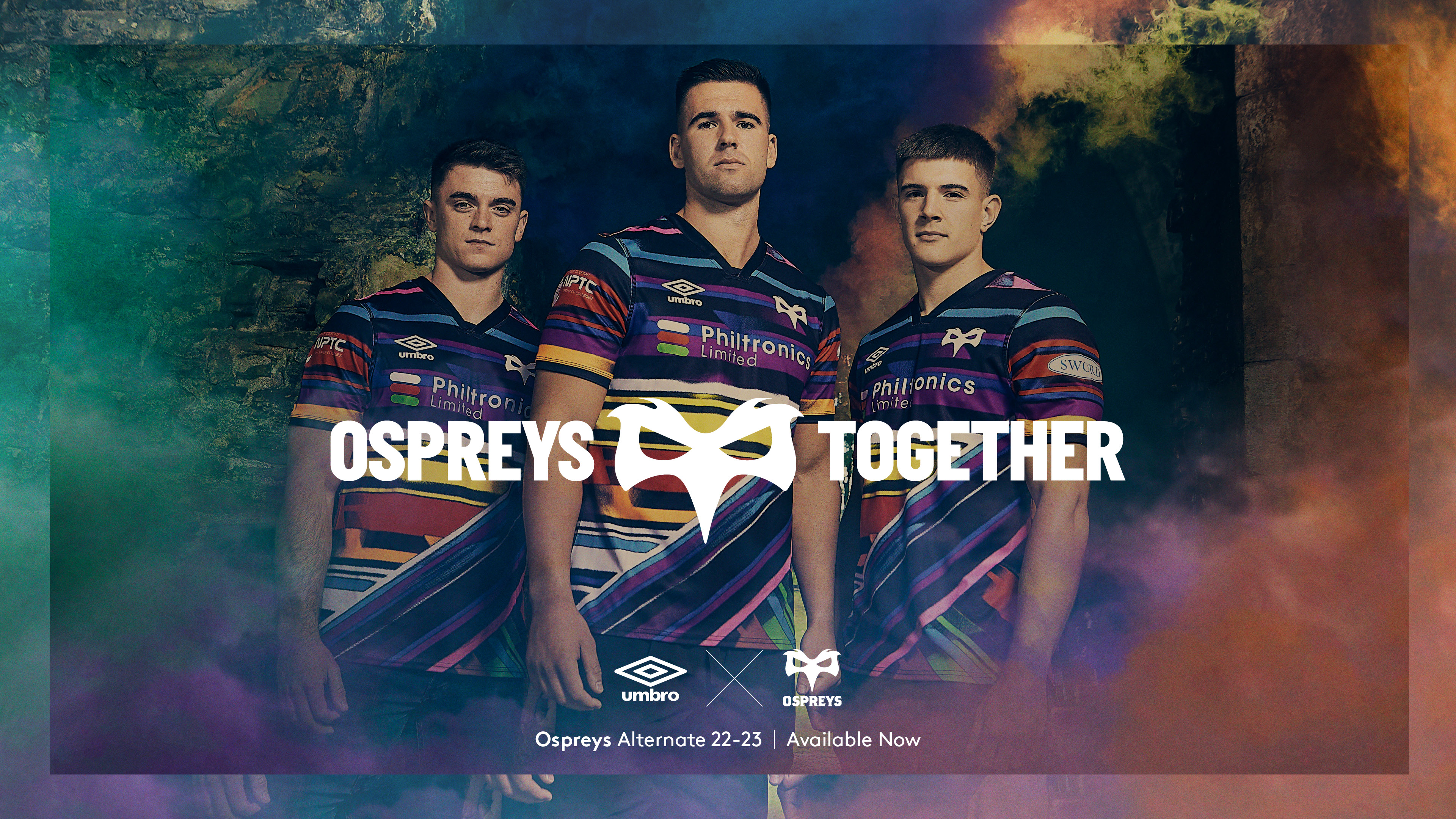 Ospreys, in partnership with our Official Technical Kit Partner, Umbro, has revealed the eye-catching alternate kit for the 22/23 season.

The new kit will be worn at all Ospreys Heineken Champions Cup matches, making its debut on 11 December 2022, when Ospreys face Leicester Tigers at Swansea.com Stadium.

Designed with Ospreys heritage and history in mind, the jersey pays homage to the teams that have played a key role in the development of Ospreys players, containing a colour from each of the 77 grassroots clubs. Moving away from the traditional home and away kits featuring the ever-popular black and white respectively.

As Ospreys journey across Europe in the Heineken Champions Cup, they will take a piece of their community with them, inclusive of all backgrounds and communities which make up their dedicated and united supporter base.

Paul Whapham, Corporate Brand Director for Ospreys, said, “We are really happy with how the jersey has turned out, the design process was carefully considered with a real focus on inclusivity and our representing the clubs in our region. We know our supporters will take just as much pride in wearing this jersey as the players.”

Scott Watson, Head of Sports Marketing, Umbro UK commented: “We have taken great pride in developing Ospreys’ alternate shirt, which has the community and grassroots clubs across the region at heart. We have produced a shirt that fans and players can wear with pride, and we look forward to seeing it on show throughout their European campaign.”

In addition, Ospreys’ principal partner, Philtronics, showcased their roots by agreeing to redesign their logo to include elements of the Welsh flag and further publicise their connection to Manufacturing Wales. A sentiment shared by Ospreys as they develop current and future Welsh players.

Simon Pritchard, CEO for Philtronics Ltd, said, “As the Ospreys fly the flag for Wales in this year’s European Champions Cup, Ospreys will also fly the Flag for Manufacturing Wales.  As a member of “Manufacturing Wales” we take pride in seeing the Ospreys Jersey help showcase globally an impressive consortium of Welsh Manufacturers who share the same values.

Heather Anstey-Myers, CEO for Manufacturing Wales, said, “There is huge synergy between the success factors for the Ospreys and Manufacturing in Wales. It’s all in the preparation, the need for finding, training, and retaining local talent; strong team skills; a game plan; learning and adapting to the field of play; working together and being part of a community that promotes the opportunities of Wales and showcases Wales to the world. Manufacturing Wales, like any good coach, brings manufacturers together with similar challenges and opportunities and supports them to a create stronger performance for Wales.”

The new Alternate Ospreys jersey is available to purchase now at shop.ospreysrugby.com