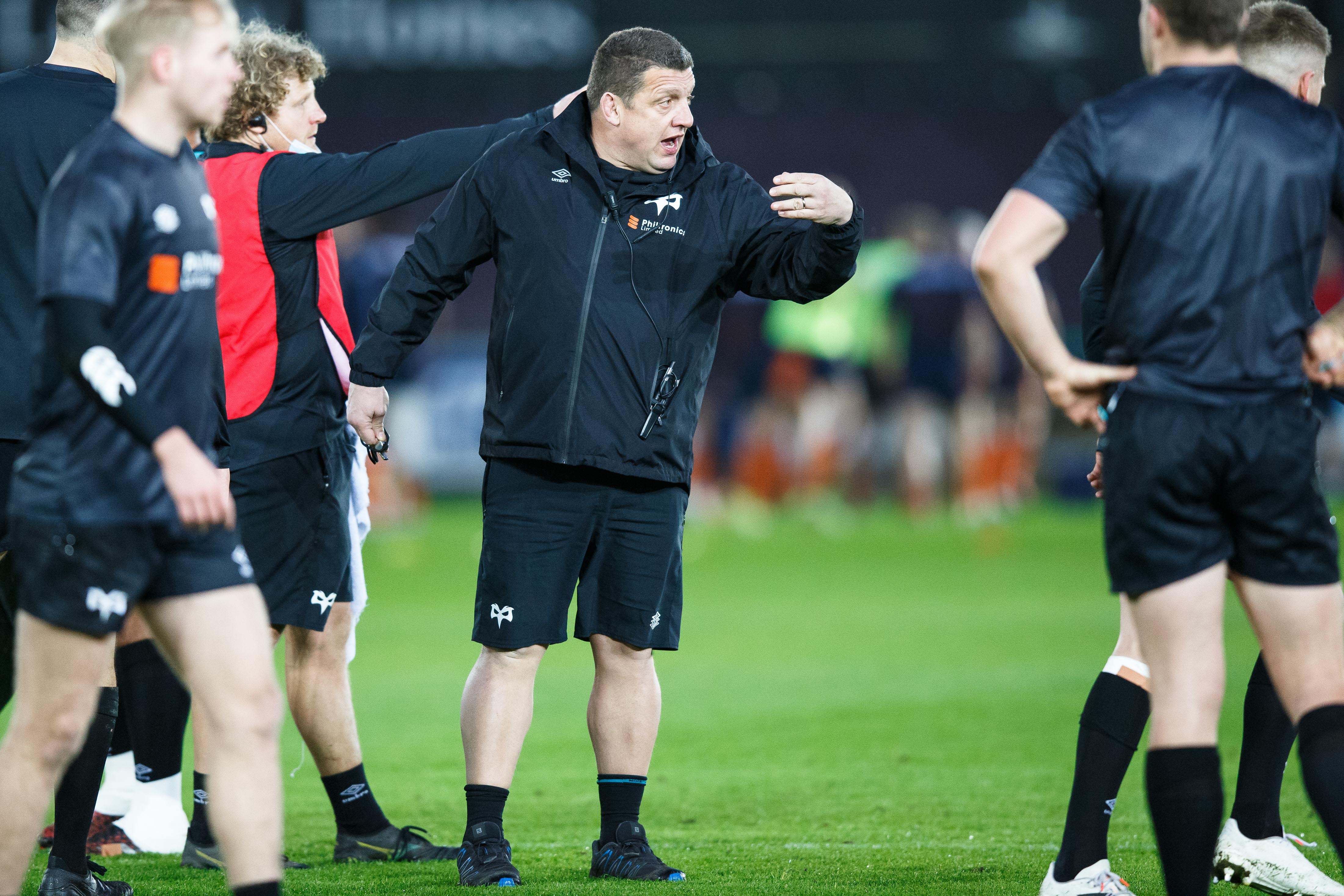 He is not available but yes, he has trained and he has trained quite a lot, which is good. He was due to be around the Zebre game, which is our next game, and nothing's happened to think that that's not going to be the case so that's exciting for us.

He's not trained but he's on track for where he is… I know he has a significant consultation next week, which will give us an idea about whether he's going to make the end of the Six Nations or not.

We're not expecting him to play again this season. It's just the time… the nature of the injury is never been seen in rugby before. It's an injury that is more resemblant to a road traffic accident, so we need to make sure that we are in 100% the right position for him to come back, and come back safely.

[When he injured his scapula], I mean obviously he wasn't with us. It was a collision injury and a direct impact injury… it's like a road traffic accident when you hit the road… you know, so it's that sort of level of impact. If you are in a position on the ground and you can't move, the force has to go somewhere and it goes through the body rather than through the floor… so that's what the nature of the injury is.

We got him back in December, which is the most encouraging thing… the fact that we got him to such a point where we alleviated the majority of those things, but the last little bit, as always, is the hardest little bit and, luckily, we found it before he took the pitch and could have re-injured himself. So we are in a situation now where we need to give the true amount of rehab and diligence to what is a significant injury. There's no rush to get him back, we just want to get him back as we do and play to the best of his ability.

I think he's been out for a long time. You know there are two ways of looking at this thing: Is he physically able? Yes, of course, he is, but it's unrealistic for him to give an 80-minute performance really. So you either start and get him out or you let him come home with the wind in his sails.

We'll probably adopt slightly different approaches for all those boys that come back… so we don't see him necessarily completing the whole 80 minutes but whether he starts or whether he comes off the bench, you know he'll have an impact because of the player he is and the leader that he is.

On the amount of work Dan Lydiate put in during injury rehab:

Yeah, there's been a huge amount of work put in… a lot of mental strength was required to get past that. As we've done with Gareth Anscombe before and Alun Wyn and [Justin] Tipuric now and bits and pieces… any players really, not just international players, that are out for a long term, require a hell of a lot of support and a very coordinated program of rehab both mentally and physically… so we've got all those structures in place.

We've got a good program that, as you know, produces international rugby players, if you've seen [Six Nations] in recent weeks, and gets people playing at the very best of their ability. When you've got someone of the ability of, say, Dan Lydiate, getting him back is very important for the group and it reflects well on the program that we've got.

On the availability of newly-signed hooker Scott Baldwin

It's too soon for him to play this weekend. He's only been in the building for a couple of days, so that's unrealistic, especially as a hooker with lineout calls and things like that. So, yeah, we will just try and get him up to speed as quickly as we can.

Obviously, it comes off the back of the horrific situation for the Ospreys around Ifan [Phillips]. There was an opportunity where he [Scott] wanted to come back to Wales because of his own personal situation.

I had worked with Scott before Harlequins… so I knew him, knew what he could bring, and he still has aspirations to play at the very top level, play international rugby, and coming back to Wales will facilitate his own ambitions, so that can only be a good thing.

We've got very good strength and depth in that position now, with Sam [Parry] and obviously, Elvis [Taione] and Dewi [Lake], who's gone exceptionally well for Wales, and if you want people to perform at their best and push the team on, you need competition for places and it [the hooker position] has probably become one of the most competitive positions that we have.

On the tough task of facing Leinster away from home:

It is one that we obviously achieved last year, so that should give us some confidence, but we're not in a situation where we can creep up and surprise people… you know because that's the price that you pay for being more visible in that space.

Look, we're excited about it. I have said this before, you always want to test yourself against the very best and they're the very best, and irrespective of it being the Six Nations window, they've got an unbelievable strength in depth. It's always going to be very, very tough to play away from home, but if we want to make progress, we've got to keep pushing ourselves and marking ourselves against the best.

On the last year's win against Leinster and how much confidence that gives the squad:

I think it's a great experience, especially for the mighty ducks that went there… so that was a nice moment in time, but, as you said, that's last season, this is this season and we're completely different, the whole situation is completely different. It was a good thing to do because, you know, the Ospreys have not done it for a very, very long time. So from that point of view, it's an experience that people can reflect on, but, yeah, its relevance for this year is virtually zero.

On the performances of the Ospreys players in the Six Nations

With my Ospreys hat on, obviously, it's great… Wales bouncing back from a result point of view but from our boys' performance point of view, I thought they were very significant and very visible last weekend in different aspects from try-scoring to line-breaks to accurate lineout throwing to having impacts in the game and you want your players to have an impact in the game.

If you look at, say Adam Beard... working with him day-in and day-out has got him into a vice-captain position… you can see how important he is now to Wales.

Again, it's another good advert about investing in your players; being very specific on their development; and working with them to be the best that they can be. And if everyone benefits, we benefit by having more strength in depth and a good team, but also Wales benefit because obviously now they're getting players that are at the top of their game and that's what this is all about.