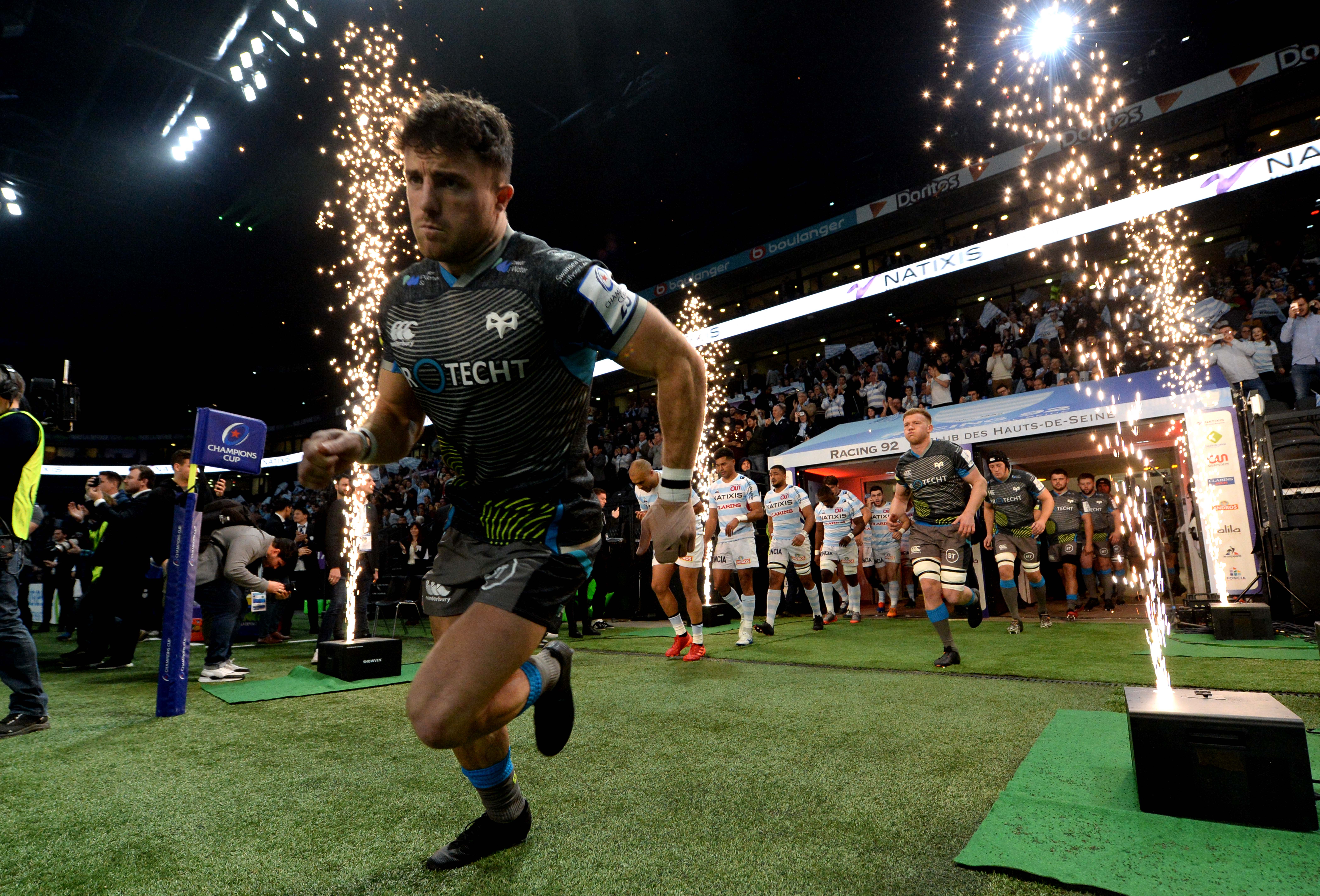 The Ospreys, who were without fourteen players due to injury, left the pitch on Friday night with their heads held high. Though Racing 92 were ultimately too strong for the visitors, the Ospreys ran in five tries under the roof of the La Defénse Arena, giving the travelling support plenty to cheer about and a bonus point to boot.

Winger Luke Morgan opened the scoring with a try in the first half, while Lesley Klim claimed a brace in the second half on the other wing. Replacement outside half Luke Price and scrumhalf Shaun Venter added to the scoresheet with a score each. In the end, however, Racing 92's tally of 40 points was too much of a mountain to climb.

Dan Lydiate
"It’s one thing about this team, the character in the boys, their heads never drop."

The French outfit made a strong start to the game but found a try disallowed within the first minute for a knock-on after pressure from the Ospreys pack.

Doing well to hold their own, the Ospreys turned on the attack in Racing's 22. The pack setting us up nicely up front after a powerful carry from young Morgan Morris. A quick pass to Tiaan Thomas-Wheeler saw the centre spy the opportunity for Lesley Klim on his wing. A chip from Thomas-Wheeler almost found the hands of Klim but soared straight into touch instead. Going back for an earlier advantage, the Ospreys took their chances and ran the ball out wide quickly for Luke Morgan to break loose and score in the corner. The conversion from Marty McKenzie just wide kept the score at 5-0 with seven minutes on the clock.

Racing answered back almost immediately with a break into our own half. Drawing in the Ospreys defence, Racing spotted the room out wide and allowed Louis Dupichot free to score the try. No conversion kept the scores level.

From the restart, the Ospreys tried to conjure up the attack in the backline, but a pass too far was intercepted by Juan Imhoff who raced over for his side's second try of the game. The conversion on point from Maxime Machenaud handed the hosts the 12-5 lead on the quarter of an hour mark.

The Ospreys looked to go again after a penalty against Racing allowed McKenzie to clear out of the Ospreys half for the lineout. Solid carries from Lloyd Ashley and Sam Cross saw the Ospreys puncture their way through their opponents' defence, but their attack was short lived with a penalty against Ma'afu Fia for holding on handing the ball back to our hosts.

With the lineout in the Ospreys half, Racing looked for another attack, but an overthrow was nicely spied by Scott Otten who gathered the possession to put us back in control. But as the Ospreys looked to swing momentum in their favour, a penalty against the visitors handed Racing the quick chance to run back up field and a break from Henry Chavancy found Imhoff on his inside to round off with the try under the posts. Conversion taking the hosts 19-5 ahead.

In a bid to claw the game back, the Ospreys powered back against their opponents with a forceful attack in Racing's half. A chip over the top from McKenzie looked for the territory and nicely found its way into the hands of Adam Beard. A blitzing break from the lock and an offload to Lloyd Ashley looked to be the making of a try, before a tackle on Ashley left the second-row struggle to make the offload to Cross on his outside, sending the ball into touch.

With time still on the clock before the half-time whistle, Racing rounded off with the bonus point inside the first 40. Simon Zebo with the honours and Machenaud converting to give the hosts a convincing lead at the break.

Running out for the second half, Racing were on the front foot with the attack. But a valiant Ospreys defence saw Morris secure the turnover and penalty for his side.

Taking it quickly off the back of the scrum, a pass out wide to Klim saw the wing make the break, but a pass on his inside couldn't make it to Cross, allowing Racing to capitalise and boot the ball back up field. A thundering effort from the hosts saw Georges-Henri Colombe Reazel pick up and ground the ball over the whitewash. The extras keeping the scoreboard ticking over for the French side.

A change in the front row for the Ospreys saw Rhys Fawcett and Simon Gardiner make their Osprey debuts and Dewi Lake make his Champions Cup debut. But Racing weren't about to make it easy for the debutants, crashing their way over for the try from Yoan Tanga to extend their lead with the conversion.

But the Ospreys dug in deep and kept plugging away at their opponents. With possession in hand, the Ospreys ran the ball out wide once more. Tom Williams with the offload to his fellow wing sent Klim over for the try, his first in an Ospreys jersey. Luke Price with the conversion put the Ospreys into double figures 40-12 just shy of the hour mark.

Dejavu struck for the Ospreys only minutes later, with a break from Williams nicely setting up Price with the offload to score the try. The difficult conversion bouncing off the wrong side of the posts kept the scores 40-17 with 10 minutes left on the clock.

Momentum swinging in the direction of the Ospreys, a stunning solo effort from Venter saw the scrum-half pick up and race on his own out wide in the corner for the try! No conversion left the scores at 40-22 with just over 5 minutes left on the clock.

The final try of the game was scored by Klim, receiving a long, floated pass from the hands of outside-half Price, and cantered in unopposed. The conversion was missed, leaving the Ospreys 13 points adrift with minutes remaining in the game.