What’s on at the Liberty this Friday?

Friday sees the Ospreys return to the Liberty Stadium for the first time since October, Edinburgh the opposition in the Guinness PRO12 (7.35pm KO).

The Ospreys remain unbeaten at the Liberty Stadium this season with a perfect record, with four bonus point wins in four PRO12 home games and another bonus point victory in Europe.

The Ospreys will be looking to maintain their unbeaten start at the Liberty Stadium, which has seen them record bonus point wins in every outing to date, scoring 31 tries in four matches. In fact, they have picked up a try bonus point in seven successive games at the Liberty Stadium, which means there’s only one place to be this Friday night as the Ospreys look to cement their place in third spot ahead of the festive derbies – or even climb higher!

It’s going to be an action packed day on an off the field!

HERE’S YOUR FULL GUIDE TO WHAT’S ON…

All hospitality areas open two hours ahead of kick-off at 5.35pm so guests can relax and enjoy their evening in style, in an unrushed, relaxed atmosphere.

Also open at 5.35pm is the O-Zone, the family friendly entertainment area underneath the South Stand. All ticket holders, young and old, are welcome to join the fun in the O-Zone and try their luck at our range of interactive games and challenges in a safe environment.

Come and meet non-playing members of the squad!

Bradley Davies and Tom O’Flaherty will be in the O-Zone meeting our younger supporters and joining in the fun and games from 6.15pm and 6.45pm.

Meanwhile, Joe Bearman, Owen Watkin and Gareth Thomas will be in the Club Shop between 6.20 and 7.05pm, helping out customers as you shop so call in, pick up your Ospreys merchandise and meet the players at the same time!

Brand new this weekend is ‘The Hatch’ an exciting street food themed area in the Riverside Lounge, open from 5.35pm until two hours after the match, serving: 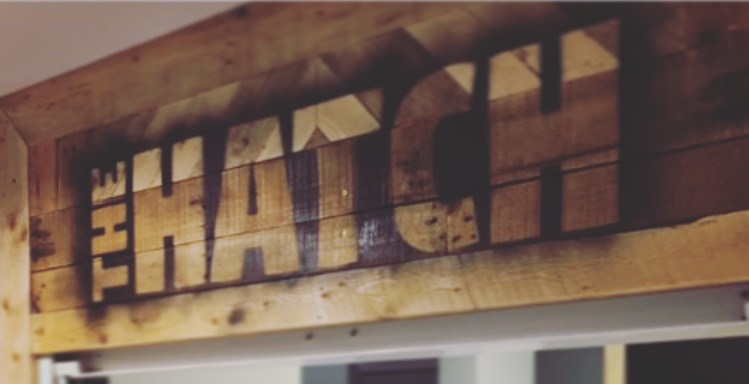 After a hugely successful launch at the last game at the Liberty, against the Dragons, the Sin Bin, our brand new student focused match day area in the West Stand will again be open for business.

Doors open at 6.35pm for a fun packed evening specially put together by the Sin Bin team at Swansea University, including entertainment, competitions and food and drinks offers.

For more information on the Sin Bin, make sure you like the Sin Bin page on Facebook.

Pie of the Month

Available at all food kiosks on Friday is the Pie of the Month for December, the firecracker chicken pie by Piglets Pantry featuring hot and spicy chicken with jalepenos for extra kick!. Give it a try if you’re brave enough

Warm up with a special mulled cider, available in the Sin Bin and Riverside Lounge

OSPREYS IN THE COMMUNITY

More than 400 pupils from Welsh language schools across the region will be joining us to perform ahead of the game. Organised by YG Ystalyfera, the choir brings together pupils from the following schools:

They will perform a selection of popular classic and modern Welsh language songs ahead of kick-off.

We’ll also be joined by Bonymaen U11s who will provide the guard of honour and Blaenymaes Primary School, who will act as flagbearers, with Loughor U12s the second half guard of honour.

We’ve got a busy half-time lined up with player interviews on the big screen, a mascot race and the best seat in the house competition which will see one lucky supporter winning big! You just have to be in your seat to be in with a chance of winning

The Ospreys Supporters Club will once again welcome supporters of both teams to their Riverside Lounge HQ in the East Stand after the final whistle.

The perfect place to reflect on the match with likeminded supporters, as always there will be player Q&As, with this week’s guests confirmed as the two Sams, Davies and Underhill.

Meanwhile, supporters are invited to join us at a special post-match after party in our West Stand hospitality areas, in conjunction with Swansea’s No6 bar.

There’ll be a DJ providing the entertainment on the night and all ticket holders have the opportunity to join us for the fun. Admission costs £5 which includes a welcome pint or glass of FIOL prosecco. U16s go free with a paying adult. You can pre-book by calling 01792 616488 or you can buy your wristband at reception from 5pm on Friday night. 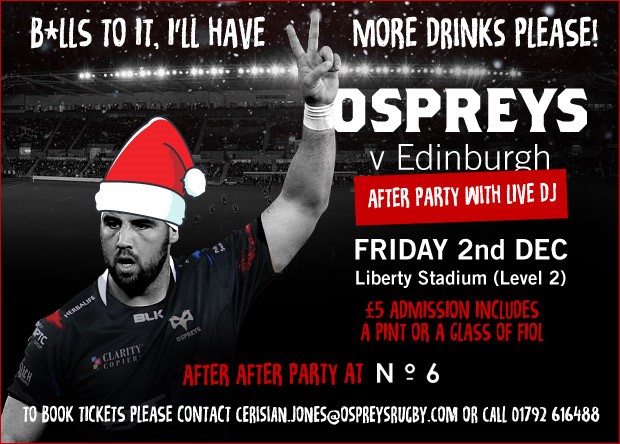 HOW CAN I GET MATCH TICKETS?

Tickets are available to purchase at www.ospreysrugby.com/buytickets now, with prices starting at just £20 (adults) and £5 (U16s).

Alternatively, you can call the Ticket Hotline on 0844 815 6665 from 10am on Friday morning, while the Ticket Office is open from 10am right up until kick-off for supporters to visit in person.

WHERE DO I PARK

There is ample parking available at the council operated Landore car park facility opposite the stadium. Please follow the signs for ‘Park & Ride’.