Webb is ‘Man of Judgement’

Rhys Webb is the first proud owner of the newly commissioned ‘Stuart Gallacher Man-of-Judgement’ trophy, as voted for by the Welsh Rugby Writers’ Association (WRWA).

The Ospreys and Wales scrum-half received his award at the annual WRWA dinner hosted earlier this week at the BT Sport Cardiff Arms Park on a good night for the region, with Ospreys Women and Skewen flanker, Carys Phillips, named the first ever WRWA Women’s Player of the Year.

Winners of the new Man of Judgement award are selected by members of the Principality Stadium press box covering the annual Judgement Day fixture, which features the four regions facing off in back-to-back derbies at the national crowd.

Webb, the inaugural winner, was voted as the ‘Stuart Gallacher Man-of-Judgement’ at the fourth incarnation of the Judgement Day event last April and the trophy – which is hand-made from locally sourced materials relevant to each region – has been in production over the summer.

The trophy has been created in memory of former Regional Rugby Wales (RRW) chief executive Stuart Gallacher and is the result of collaboration between Pro Rugby Wales, the Welsh Rugby Union (WRU) and the WRWA - his widow Jan and his son Jonathan attended the dinner to proudly witness the presentation, from Ospreys chairman and close friend of Gallacher, Roger Blyth.

He was a hugely respected figure in rugby with a career that spanned more than 40 years and was instrumental in establishing the extremely healthy working relationship between the WRU and the regions we see today, exemplified by the Judgement Day event. 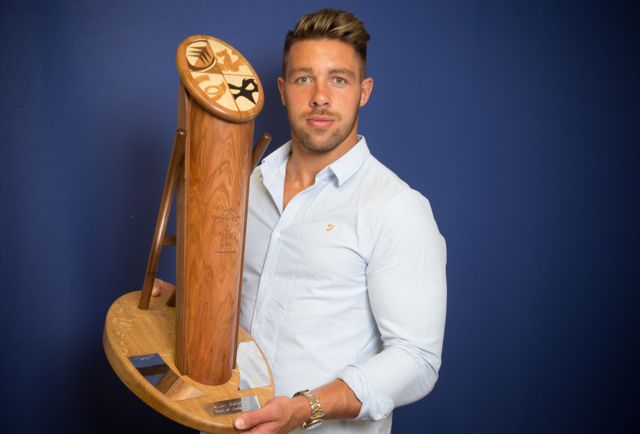 “Judgement Day is a true celebration of our regional game, the concept was a sound one from its inception, at a time when Stuart Gallacher was an instrumental part of everything that happened in the regional game.

“This new trophy will become a part of its illustrious history with a new winner each year representing the very best of regional rugby and it is a fitting tribute to Stuart and all that he did for rugby in Wales that it will carry his name."

Mark Davies, Chief Executive of Pro Rugby Wales said: "Stuart was recognised and respected as one of the game's most influential figures during a challenging period of change in professional rugby and he worked tirelessly for the regional game.

"This new annual Award, which we are delighted to present to Rhys Webb as its first winner, is in recognition of the wide knowledge, experience and contribution that Stuart made to the game over 40 years. It's fitting that it now is part of Judgement Day which has become such a successful and high profile club rugby event in partnership with the Welsh Rugby Union."

“We were extremely grateful to welcome Stuart’s wife Jan and son Jonathan to our annual dinner this week to present the award to Rhys Webb.

“Rhys’s name is just the first to be etched onto a trophy which will now become a part of the tradition and history of the WRWA and we are proud to have played a part in its creation.”

The ‘Stuart Gallacher Man-of-Judgement’ trophy has been constructed from wood directly sourced from each of the four representative regions of Welsh rugby’s elite game.

The top is made from Plane – also known as Lacewood – gathered from a tree grown in the Swansea area (the Ospreys’ region), the main stem of the trophy is carved from Apple wood found in Rhondda Cynon Taff (Blues) and the Oak base was grown in the Scarlets’ region.

The goal posts, which support the main shaft signifying the flight of a ball through rugby posts, originate from the same Walnut tree that supplied the timber for the back board of the Presidents Board housed on the Principality Stadium concourses since 1988 – and is from a tree felled over 30 years ago in a small wood near Magor (Dragons’ region).

Designer and maker Kevin Jakeway, from ‘Modern Animal’ in Powys, has hand carved a WRU logo into the Apple-wood stem of the trophy and used marquetry to make each of the four regional logos on a ‘ball’ which flies to the highest point of the work.

The veneers which forms these logos uses Sycamore, Cherry and Walnut woods and a final design touch sees any naturally formed cracks in the woodwork inlayed with brass powder highlights.

The plates, which have seen Rhys Webb’s name engraved by Ystrad Mynach jeweller Andrew Berry and will be blessed by a host of deserving rugby stars in future years, are silver.

The fifth incarnation of the annual regional double-header takes place this year on Saturday 15th April, with tickets going on sale later this month.

Rugby Union Player Llanelli RFC; 1965 - 1970; youngest elected captain of the Scarlets (21 years of age) in the history of the club, capped for Wales against France in 1970.

14 appearances for the Barbarians

Kevin Jakeway has been a designer/craftsman in wood for over 35 years. His ideas are inspired by the fusion of the intrinsic beauty of wood with function and a combination of traditional and modern craft techniques. With a keen commitment to the environment, he uses locally sourced sustainable forest timber.

Following the completion of a degree in design in the mid 1980s, Kevin has had a wide variety of commissions including several with the WRU; he created the WRU Presidents board with its original carving in 1988 and adapted it in 2010 to incorporate a carving of the current WRU logo also; in 2011 Kevin also made the presentation baton given to Haydn James in recognition of his outstanding musical contribution to Welsh Rugby.

Originally from the Rhondda and now living near Llanidloes, Kevin continues to work in wood as well as managing a charity called Inside Out Cymru that enables people with mental health issues, dementia and learning disabilities to access different arts activities.