Ospreys Rugby are delighted to announce the signing of scrum-half Martin Roberts from Bath on a two-year deal, a move that allows the Welsh international to return to his home region.

The 28-year old from Glynneath was one of the first players to come through the regional development pathway at the Ospreys when he made his debut off the bench as a 19-year old in an Anglo Welsh Cup defeat to Bath in October 2005, with his first start coming three months later away to Bristol in the same competition. He made a total of 22 appearances for the region over three seasons,  scoring one try.

After leaving the Ospreys in 2008 his consistency has seen him making more than 150 top flight appearances, firstly just across the Loughor Estuary with the Scarlets (79 games, 10 tries) and then in England in the Premiership with Northampton Saints (59/2) and for the last year with Bath (20/1).

Having represented Wales at all age-grade levels and sevens he has won three full caps to date, making his debut against Canada at the Millennium Stadium in November 2008.

Roberts becomes the eighth summer signing of the Ospreys.

Speaking about coming home to the Liberty Stadium, he said:

“It’s a really exciting time for me. It’s a new beginning and I’m looking forward to it. I’ve been in England for the last three years, playing for good teams, and it’s been a great experience that has definitely benefited me personally and professionally.

“I was still very young when I left the Ospreys and coming back I think I’m a much improved player. Moving away to Northampton, leaving the comfort zone of being your around friends and family and standing on your own two feet makes you grow up. I feel I’m a far more mature person now and hopefully I can show that in and around the environment.

“I know Tandy very well having played and trained with him, and I’m looking forward to working with him. He’s someone I respect and I know he’s a good coach with strong views and a vision for where he wants to take the team.

“It’s a challenge I’m looking forward to. I can’t wait to meet up with the group on Friday and start working with them ready for the new season.” 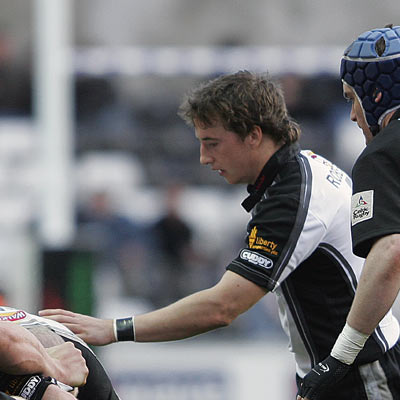 “We’re absolutely thrilled to be able to bring Martin back to his home region. He’s experienced some different, very strong, rugby cultures over the last few years of his career where he has been able to make a significant contribution to the environment while also improving his own game.

“His arrival will add to the depth of competition at scrum half. We’ve now got three very good Welsh nines competing for the jersey and Martin has shown elsewhere, particularly at Northampton, that he will push the other scrum halves in the squad to become better while also retaining his personal ambition and drive to be a big player. His desire to succeed is clear, it has been there since he was a young man coming through the ranks here and that ambition is still there.

“He has all the attributes we are looking for from a nine, in terms of his passing ability and his ability to challenge the line. He also understands how and where to make the team effective in terms of bringing forwards into play and his relationship with 10.

“This is a very positive signing for us ahead of the new season, someone we believe will have a big impact over the next two years, and we are delighted that he will be wearing the black jersey once again.”

In addition to the eight signings made to date, the Ospreys have also secured the long-term services of 16 current squad members who have signed new contracts during 2014.

Following this signing, Tito Tebaldi has been given permission to speak to other clubs regarding a move, in order to give himself the best chance of establishing himself as first choice with the Italian national team ahead of next year’s Rugby World Cup after returning to the squad since joining the Ospreys last summer.