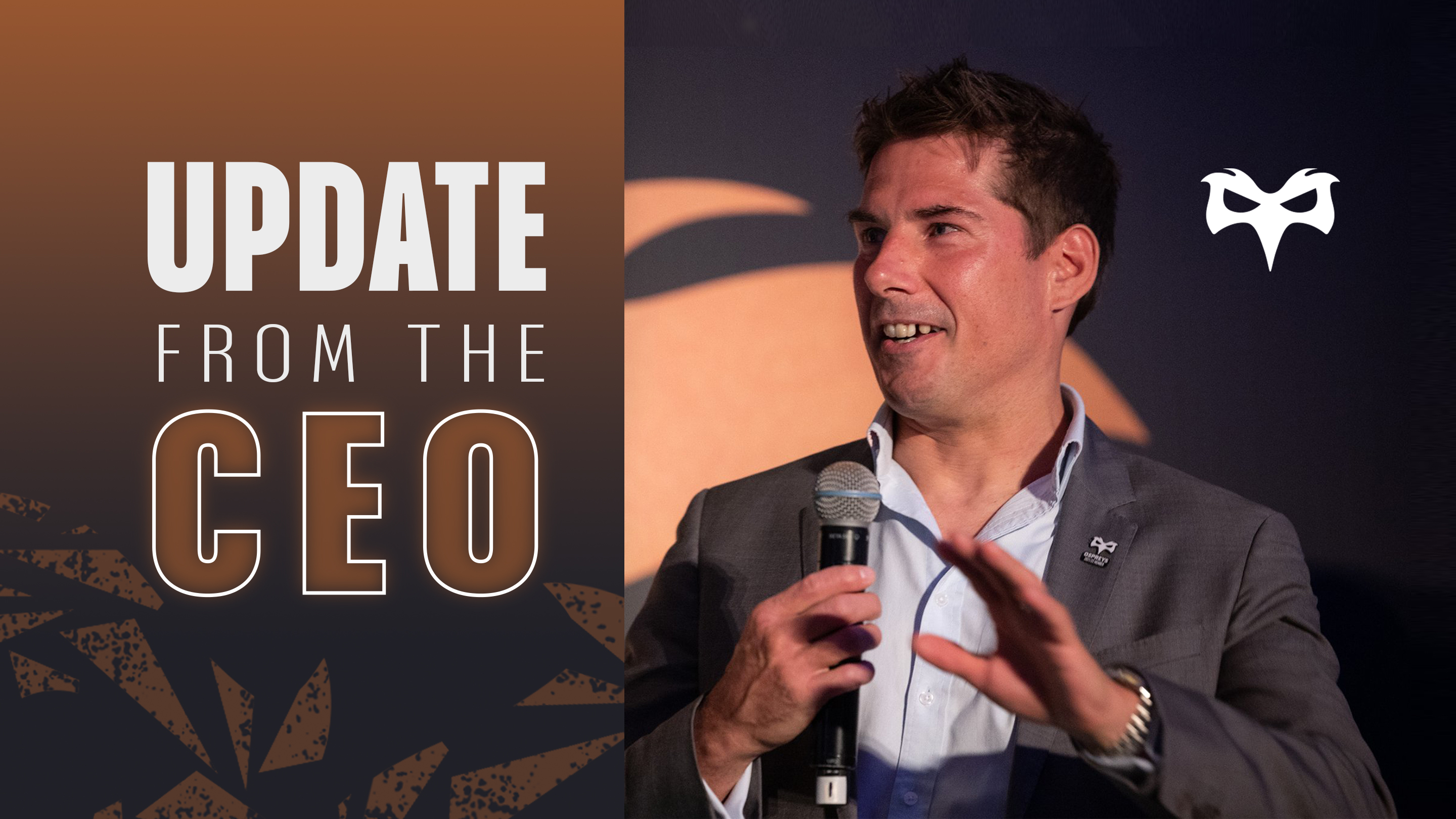 Update from the CEO

We are well into block one of the BKT URC 22/23 season and it’s great to be back. As CEO, I have never been shy about where I want to take Ospreys and the vision I  have for the team. Last season, we saw this start to materialize, and despite the issues faced, we finished strong.

It has been an interesting start to the season as we have already experienced highs and lows, with a tough draw to Scarlets and a narrow loss to the Emirates Lions. Our convincing win against Glasgow Warriors proved what we are capable of.

Last week’s loss to Ulster was an unfortunate by-product of Welsh Rugby commitments but I was incredibly proud of the resilience shown by the younger players. Unfortunately the loss of our international players has a significant impact on our performance, but we will continue to invest in player development to mitigate this.

Off field, our revamped hospitality offers have received rave reviews as we launched a new, modern menu in the Executive Lounge, the inclusion of live entertainment in the Nest, and of course, exclusive player Q&As. Our Nest hospitality attendance has increased by over 60% compared to this time last season, and with new hospitality offers on the horizon, we have something to suit all supporters.

We have seen amazing support from the community thus far as they have come out in numbers to support us and take part in our ever-popular half-time tag. Our match against the DHL Stormers will host over 970 people from our community groups, clubs and schools. I’m proud of the work Ospreys in the Community is delivering as leaders in their field across the UK.

This season we will see the return of the biggest game of the year, the West Wales Derby on Boxing Day. After 10 years, Ospreys will finally host this illustrious event once again. We are gearing up to make this the biggest one yet and ensure it’s a match experience like no other. Make sure you mark it down in your calendar and get your tickets now.

Toby has said it time and again, and it couldn’t be more true, supporters in the stands really do make all the difference. Late kick off times have led to smaller crowds than we would like. While there are complexities on the league’s side with broadcast partner requirements, there is an understanding among us all of the need to balance what is good for our supporters and TV partners. We are in constant dialogue with the league and broadcasters on how we can work together to find the best median.

We are constantly testing and looking for new ways to raise the in-stadium experience to ensure all our supporters have an unforgettable time and return to our next home game.

Our supporters’ attendance is crucial to the players performance – your backing makes all the difference, and they need your support when taking to the field. The roar of the crowd, the waving of flags, the chants and the cheers, that’s what pushes the players harder and drives them on. We need as many supporters as possible, so make sure you come on down and support the boys.

We will soon be launching our 22/23 alternate kit, and it’s bound to turn a few heads. Without giving too much away, when we don the kit in Heineken Champions Cup matches, we will be taking a piece of our community with us as we pay homage to all our 77 grassroots clubs. Keep an eye on our social media channels for this exciting jersey.

As everyone is aware, there is some speculation on the discussions happening around the Welsh Pro Game that is understandably causing concern among some of our supporters. The reality is, until a decision is made and communicated, this information is just speculation.

I am looking forward to the remainder of the season as we visit new stadiums, play new teams and break new ground. Despite the issues we face, I remain positive about the future of the Ospreys.

CLICK HERE TO JOIN US IN ONE OF OUR HOSPITALITY LOUNGES