Trebanos RFC will receive a special visit from the Ospreys this spring following their success in the Worthington’s ‘Show Your Colours’ promotion for the Christmas derby against the Scarlets.

Thanks to the joint initiative between the Ospreys and long-term commercial partners, Worthington’s, the Swansea Valley club will enjoy a special club day that will see both the first team squad and the Ospreys in the Community team visiting.

Over 1,200 people from 18 clubs across the region were at the Liberty Stadium as part of a 19,514 crowd, the biggest for the Ospreys since 2008. Trebanos led the way, with over 150 members enjoying a Christmas day out at the rugby, earning them first prize in the ‘Show Your Colours’ competition.

Paul Whapham, Foundation Manager, Ospreys in the Community, congratulated Trebanos, and said that ‘Show Your Colours’ had been a huge success.

“It was fantastic to see so many club members enjoying the Scarlets match as part of such a large crowd, and Trebanos were worthy winners of this fantastic prize with the biggest representation.

“We are extremely grateful to Worthington’s for their support, providing transport to clubs for this big game, making it easier for community clubs to be a part of the biggest game in regional rugby. We are looking forward to taking the squad to Trebanos later this spring.”

As well as supporting ‘Show Your Colours’, Worthington’s also entertained over 100 customers from local rugby clubs and associated businesses in hospitality, ensuring the grassroots game was well and truly represented at the game.

“Worthington’s are a long-term supporter of rugby in this region, not just as a partner of the Ospreys but also a high percentage of the clubs that are the heartbeat of the Ospreys community. Worthington’s is synonymous with grassroots rugby in Wales therefore were delighted to give local clubs the opportunity to benefit from this initiative and enjoy a spectacular day of rugby at the Liberty Stadium.  Our congratulations to Trebanos Rugby Club, who have traded with Molson Coors for many years”

Worthington’s guests were part of a record turn-out in hospitality, ensuring a successful day for the Ospreys on and off the field, not only with the Scarlets defeated in front of an eight-year high crowd but with the commercial team toasting the highest ever hospitality sales, enjoying a capacity sell out.

“It was wonderful to see such a high turn-out, with all our hospitality areas full. Stadium improvements in recent years mean that we have more hospitality space available than ever before, but demand was so high for this one that we could have sold even more if we’d had the space. All our guests had a fantastic afternoon with the on and off-field teams at the Ospreys delivering a quality performance.

“The challenge is to transform days like this from a one-off to a regular thing and we have exciting plans in place for 2017, working in collaboration with the Union and external agencies, to drive increased year-round sales, with the obvious benefits to the business that brings.” 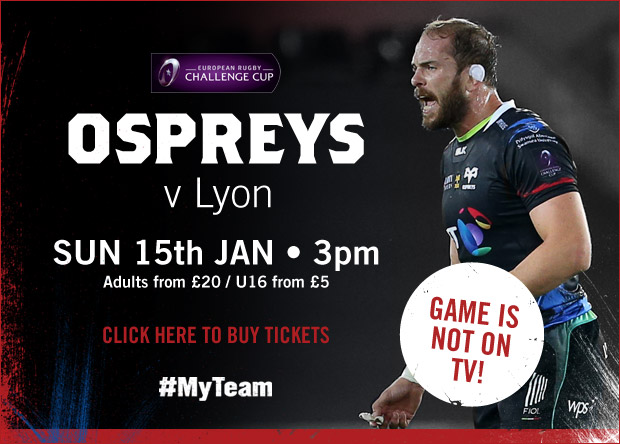