Ospreys Rugby are delighted to announce that young prop Gareth Thomas has put pen to paper on a new three-year contract, committing to the region until the end of the 2018/19 season.

The 22-year old from Newcastle Emlyn moved to the Ospreys two years ago from Carmarthen Quins and has made 18 appearances for the region to date.

He made his debut in an LV= Cup clash with Saracens at the Gnoll in November 2014, his PRO12 debut coming two weeks later against Leinster in Dublin. Just a week after that, he featured against Racing Metro in the European Cup.

Capped at age-grade level, Thomas was an integral part of a successful Wales U20 squad that reached the Junior World Championship semi-final in 2012 before going one better a year a later, reaching the final for the first time. 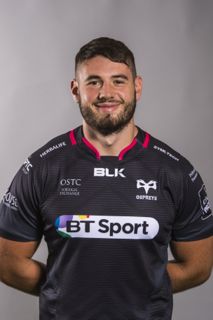 “I’m really happy that I’m going to be with the Ospreys for another three years” said Thomas after signing his new deal.

“It’s been great to be part of the squad for the last two seasons and I’ve really learned a lot being here, from the senior players and the coaches. I’ve had some great experiences and I’ve got to keep working hard to keep myself involved in the squad, which is what I really want.

“This is a great place to be and I’m really excited about my future with the Ospreys.”

“Gareth is a young man with huge potential, a desire to learn and a great attitude. He is always looking at how he can improve as a player, but understands that the team comes first.

“To be fair to him, he has probably had frustrations at times as he wants to be playing more, but he has a real grasp of what we want to see from him and what he needs to do day in, day out.

“There are elements of his game that he needs to keep working on if he is going to fulfill his potential, but there is no doubt he’s a real prospect, still young for a loose head, who adds something to the squad. There is real competition for places in his position but, if he keeps working hard, he can play a big part for the Ospreys over the coming seasons.”