The 19-year has committed his future to his home region, signing a three-year deal to cap a breakthrough season that has seen him feature regularly in the Guinness PRO12 as well as making his European debut.

He helped the Ospreys U18s to the WRU title last season, scoring two tries in a 43-14 win over the Blues in the final, also featuring in the Premiership for Bridgend Ravens.

Already capped at U18 level, he was ever present in the Wales U20 squad during 2015, playing in all 10 Six Nations and Junior World Championship fixtures and played a further three games in this season’s age-grade Six Nations as Wales completed a Grand Slam.

His senior regional debut came last September, still aged 18, when he started against Munster at the Liberty and, after playing in the first four rounds of the B&I Cup for the Ospreys Premiership Select, he has been involved regularly with the senior Ospreys squad since the turn of the year, taking his total appearances to 10.

He made his European Cup debut as a replacement against Exeter at Sandy Park, and scored his first try in the 21-17 win in Cork against Munster in February. 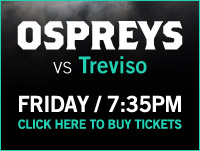 “I’m over the moon. I’m really pleased that the coaches have faith in me. It’s hard to believe how quick things have moved on for me since signing my first contract, I never thought I’d come as far as I have this season, playing for the senior team in the PRO12 and in Europe.

“It’s a massive step-up for me but I’m enjoying it. I know I’ve still got a long way to go yet but I’m proud to be part of the Ospreys squad. As a Bridgend boy, playing for the Ospreys at U16 and U18 level, all you want is to play for the senior team. If I can keep improving myself, do all I can to improve the team, I want to be here for a while.” 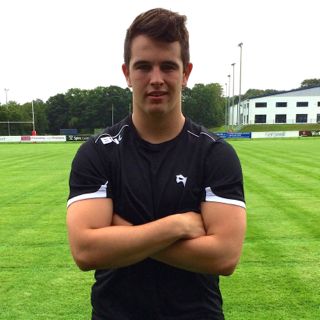 “Owen is a really good footballer, with a combination of skill and physicality that is pretty rare for somebody so young. He has all the ingredients to become a quality player, as we’ve seen already with the impact he has made at PRO12 level.

“He’s level headed and his attitude is spot on. He’s not someone to get ahead of himself, he understands that he is only at the start of his career and there’s plenty more hard work in front of him.

“The new contract means that his future is secure and he can just concentrate on doing what is needed to fully cement his place in the senior squad, this season and beyond. He has a fantastic opportunity now to really kick on in this environment and our supporters should be as excited as we are as coaches about the potential he has.

“He is yet another player who has come through the development pathway at the region, a pathway that is producing more and more players, seemingly at a younger and younger age, which is fantastic for Ospreys Rugby in the long run. With a core of young talent coming through the ranks that has gained immense experience over the course of this season, the future is as bright for the region as it has ever been.”