Team ethic is a winner for Tipuric

Captain for the day, Justin Tipuric, led from the front in Parma on Sunday, scoring two tries in a man of the match performance as the Ospreys secured a bonus point win over Zebre.

As the team prepared to fly back to South Wales post-match, Tipuric reflected on the game, calling it a “well deserved” result.

“It was an excellent win” said Tipuric.

“To be fair to the boys, we knew it was going to be a difficult game. Zebre always get stuck into it and never give you an easy ride, as their record at home shows.

“We played some good stuff and it was good to get a well deserved five points, which is what we need if we are going to close down the teams above us in the league.”

Having set the early pace the Ospreys suffered a setback when a length of the field interception try saw Zebre snatch the lead against the run of play. According to Tipuric, the response from the team was the most pleasing factor of the afternoon.

“It was good character from the boys to be honest” continued Tipuric.

“We’d started brightly only for them to get an interception try, which they took well in fairness to them. Those things happen in rugby, the test is how you bounce back and it was great to see the boys bouncing back positively, straight away.

“Nobody panicked or anything, we didn’t go off plan, we went straight back at them at the other end, did our jobs collectively and created some nice tries to take the game back from them and put us in a good position.

“We let them back in just before half time so it was crucial that we tightened up at the start of the second half and looked at building our lead and that was exactly what we did.” 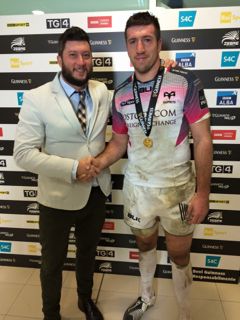 As captain for the day there was extra responsibility on Tipuric’s shoulders, club captain Alun Wyn Jones remaining on the bench alongside Dan Biggar, while the team was also without the experienced heads of Dan Lydiate and Brendon Leonard, among others, a factor that pleased Tipuric:

“It’s nice that we did the job in the way we did, with a good squad performance. It shows that we aren’t reliant on just one or two boys, if we are missing a couple, if we have one or two injuries, we have players who can step in and perform.

In his typically modest way, Tipuric played down his own contribution, preferring to focus on the team ethic.

“The boys did all the hard work to be honest” he said.

“I was lucky enough to be on the end of that. The main thing is, like I said, it was a good squad performance, we saw some nice rugby, but we can still improve as there are a few things to work on in defence for Bordeaux on Saturday.

“It’s a massive month now that can make or break our season. It can either turn out to be a great month or a bad month, depending on how we perform over the next four weeks.

“We have to make sure that we take it one game at a time, there’s no point looking at Scarlets, or games down the line, as it can go down the pan by the time we get there. We need to prepare for the next game, give that all our focus, and make sure we are 100 per cent right, do the job next Saturday and then look at the next game.”