Swansea University brought the Varsity crown back to Ospreylia after claiming a 19-15 victory over Cardiff University at the Millennium Stadium on Wednesday evening.

The win makes it five for Swansea in the last six years as they continue to dominate the annual challenge match.

Tries from Jack Perkins and Matthew Jenkins, one of four Ospreys in the Swansea team, along with a penalty try, saw the green army through to victory.

Tom O'Flaherty scored two tries for Cardiff but they were unable to overhaul a strong Swansea side. Jack Neville fired Cardiff into the lead after just five minutes, the Swansea students were penalised for diving over top of a ruck and the outside-half slotted over to put his side 3-0 ahead.

But Swansea were beginning to gain the upper hand in the set piece and won a succession of penalties in the Cardiff 22. Tight-head prop Aled Rees was shown a yellow card before the Swansea tight-five took full advantage of their man advantage, overpowering Cardiff at another scrum and eventually being rewarded with a penalty try.

It looked like it was going to be a long afternoon for Cardiff, but they hit-back against all odds through O'Flaherty. Down to 14 men, they spread the ball wide, Arthur Ellis threw a long miss pass to the winger who rounded his defender to score at the corner.

However, Swansea quickly overturned Cardiff's 8-7 half-time advantage. Cross Keys flanker Perkins crashed over at the back of a maul after Reuben Tucker's take at the line out.

Centre Jenkins, who played for the Ospreys three times in this season’s LV= Cup, broke clean through the Cardiff defence to score his team's third try of the evening. Will Thomas added the extras to take the score to 19-8. But Cardiff hit-back just two minutes later, scrum-half John Preddy darted past the Swansea defence before the ball went to ground and ricocheted into the hands of O'Flaherty, who scored his second try of the match. 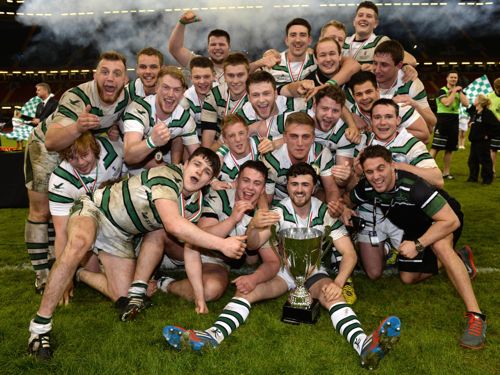