A selection box you won't feel guilty about…

Enjoy the perfect selection box of first class rugby with an Ospreys half-season ticket. It’s the ideal Christmas gift for the rugby fan in your life – or you can give yourself a festive treat.

With adult prices starting at just £99, a half-season ticket offers incredible value and allows the recipient access to all eight remaining home games post-Christmas, including the eagerly anticipated derby against the Scarlets on 27th December, working out at just £12 a match.

That’s a saving of almost 50% on matchday admission. Seniors can watch all eight matches for £69 with U16s half-seasons available for just £19.

The Ospreys have been THE team to watch this season, currently sitting pretty at the top of their European Rugby Challenge Cup and Anglo-Welsh Cup pools, as well as leading the way among the Welsh sides in the Guinness PRO12, just a point off the top of the table and holding an end of season play-off spot as it stands.

With 40 tries from six competitive matches at the Liberty Stadium so far, that’s an average of more than six a game for the Ospreys this season and the entertainment is set to keep coming thick and fast.

Huge games against leading PRO12 contenders Ulster, Leinster, Munster and Glasgow, as well as reigning champions Connacht, are still to come and are also covered by a half-season ticket.

In addition, entry to the crunch European game against French side Lyon, as well as the Anglo-Welsh clash with Bristol, is included, which means there’s never been a better time to give someone the gift of rugby.

CLICK HERE TO PURCHASE YOUR HALF SEASON TICKET NOW!

“What better present is there for anyone who loves rugby than a half-season ticket at the place to be this year, the Ospreys?

“We’ve got 5,000 loyal supporters who have already signed up for a full season membership. They’ve enjoyed what has been an incredibly entertaining season so far and are no doubt looking forward to what promises to an exciting second half of the season, with the potential to be one of our best.

“When you look at the fixture list post-Christmas, with the Scarlets and all four Irish provinces still to visit, and then take into account the fantastic value of a half-season ticket, then you realise that this one of the best Christmas presents you can buy this year.

“If you are looking to make someone’s Christmas, or even your own, then sign up now to support the cause in 2017.”

Anyone with a half season-ticket enjoys the same benefits as a full season member, including a wide range of discounts and offers with Ospreys’ commercial partners.

We’ve added some new fantastic deals recently including 30 per cent off open bounce sessions at Limitless, Swansea’s only trampoline park, 25 per cent off your food bill from the a la carte menu at Las Iguanas, Castle Quarter, Swansea between Sunday – Thursday plus 241 cocktails all day every day, and 10 per cent off treatments at Stacey Yeun Aveda Salon in Swansea.

With more being added in the coming weeks leading up to the big day, to make it the Christmas gift that keeps giving!

There really is no tastier treat in Welsh rugby than matchday at the Ospreys so make sure you dip into our selection box this Christmas….. 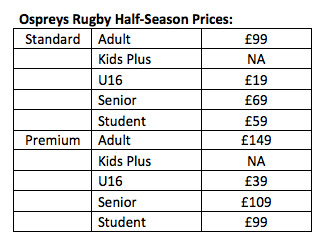