A choir consisting of 700 school children will perform at the Liberty Stadium on Friday night.

The choir, made up of pupils from the three Welsh language comprehensive schools in Swansea and Neath Port Talbot and their cluster primary schools, will sing a selection of Welsh songs, both traditional and modern, ahead of kick-off and at half-time.

It’s the fourth year that the Ospreys have hosted the Welsh language choir at the Liberty and, bigger then ever before, it’s the first time that they have invited to perform at a Champions Cup fixture.

“We are delighted to be attending Friday night’s game to perform. In 2013 Ystalyfera school and the 13 cluster primary schools came up with an idea to attend an Ospreys game as a cluster choir and perform a variety of Welsh songs during the half time and the second half of the game.

“This was a resounding success with some 300 pupils attending and singing with great enthusiasm and enjoyment. This activity has grown since then with  Bryntawe and Gwyr and their cluster primary schools joining us so that this year we anticipate some 700 children attending the game and singing a variety of songs – both traditional hymns and some more up-beat Welsh songs.

“We see this as a fantastic learning experience for pupils from the ages of 10 – 18 as they learn new and traditional Welsh songs, co-operate with pupils from other schools in learning some dance moves and gain an opportunity to watch a live game and appreciate the team values that are required for success in rugby and in other areas of life.” 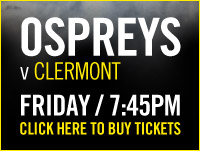 Mam wnaeth Got I mi

“Everybody is looking forward to seeing the choir in action on Friday night, bigger and better than ever before. This is a huge game for the Ospreys, the biggest at the Liberty Stadium for many, many years, and the choir will have an important part to play in helping to create the kind of inspirational atmosphere that can drive the team on to success.

“Friday promises to be a big night and a memorable occasion for all concerned, on and off the field.”

Tickets for Friday’s match are available to buy now from the Liberty Stadium Ticket Office and online at ospreysrugby.com/buytickets. If you buy online and print at home there is no admin fee charged for this match.