The Ospreys have added Samoan international loose head Jordan Lay to the squad ahead of Friday’s Guinness PRO14 clash with Ulster at the Morganstone Brewery Field.

The 26-year old has signed on a one-month emergency loan following an injury crisis that means the Ospreys are without all their front line loose heads.

Following Paul James’ retirement in December, Rhodri Jones (shoulder) and Gareth Thomas (ankle) have both been ruled out of action while Nicky Smith, who hasn’t played for the Ospreys since early December because of an ankle injury, is now with the Wales squad for their Six Nations campaign.

The situation led to Rowan Jenkins being drafted into the squad on permit from Aberavon, featuring off the bench in the last three Ospreys games, and prior to Lay’s arrival earlier this week he was the only senior loose head in the camp.

Lay has played 11 times for Samoa, making his debut against Tonga in July 2017, and has previous experience of the PRO14 with Edinburgh prior to his move to Ashton Gate. 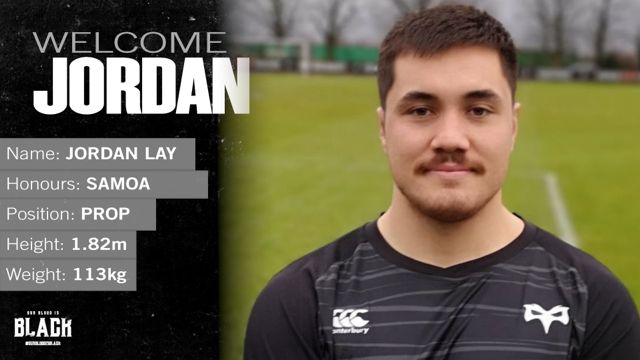 “To lose four senior loose heads, as well as having two young players in the academy either with Wales U20 or returning from injury are exceptional circumstances.

“We’ve worked with the WRU to try and identify a suitable replacement but have had to look further afield to find a player of the quality needed to do an important job for the team over the next three matches.”

“It’s excellent news that we have been able to identify and recruit a player of his quality and experience to come in as short term injury cover at such an important time.

“Injuries and international calls have really put us under the pump in a key position. Rowan Jenkins has been excellent since coming in last month, in terms of his attitude around the environment and his performances on the pitch, but we need additional cover and Jordan will provide that over the coming weeks.”