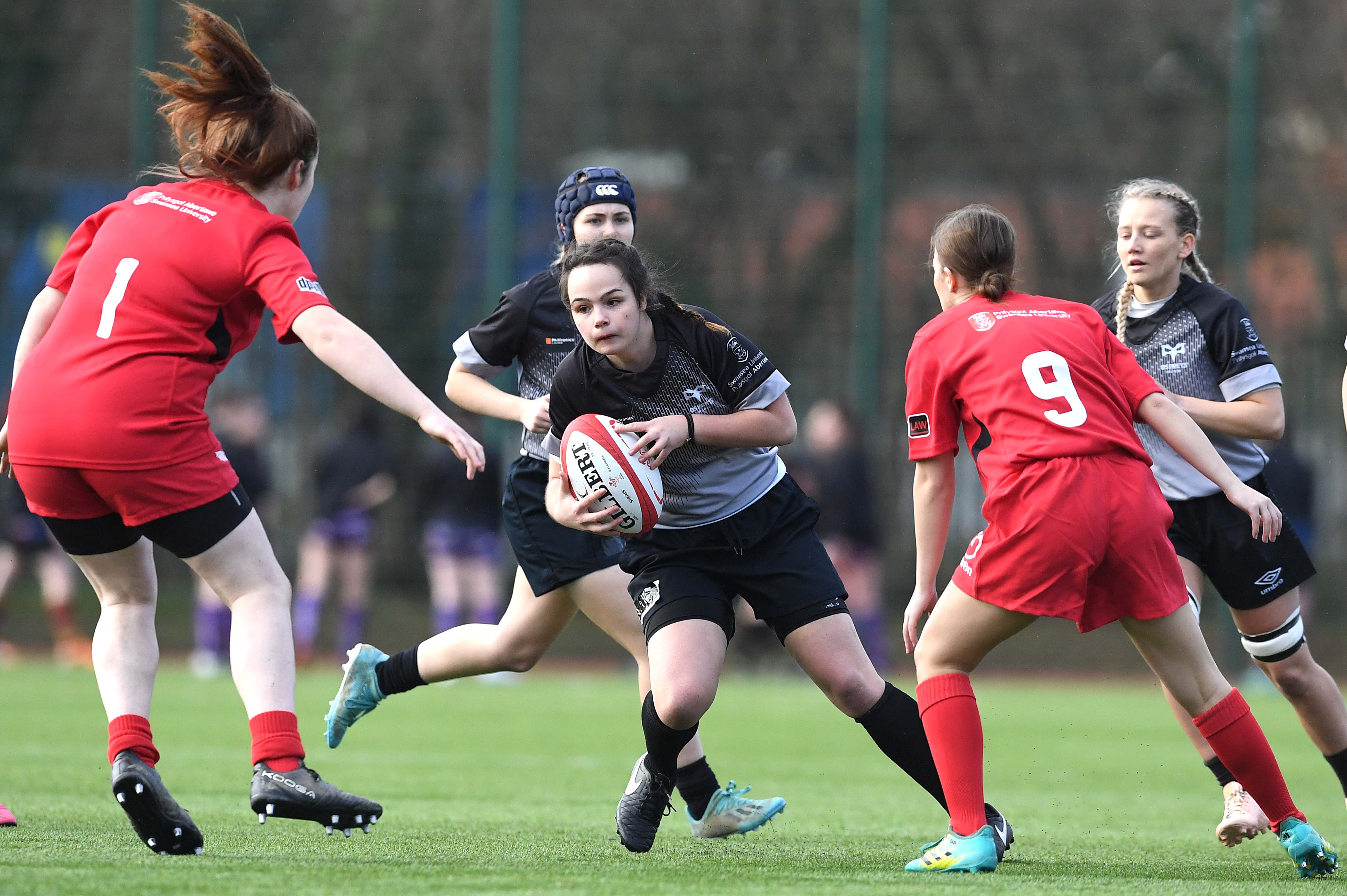 Rogers: "Knowing that one day that could be my job is an amazing feeling."

The Ospreys U18s Women made their long-awaited return to action this month in the WRU U18s Women tournament.

After four weeks of training together as a group, the Ospreys side took on Welsh rivals Cardiff Rugby, Dragons, RGC and Scarlets in a round robin tournament as the girls battled it out for a potential place in the Women’s national squad selected by Head Coach Liza Burgess at the end of February.

Ospreys Captain, Jessica Rogers gave us her views ahead of the final round of action this weekend:

“It’s been a great experience training as a group over the last couple of weeks. The coaches have made it both fun and competitive at the same time as well as making sure we know that we can get selected for a Welsh squad at the end of this.

“Stef and all of the coaches have all gone above and beyond and been amazing. They’ve done every little thing they can to help us and driven a well-organised programme for us all. I’ve enjoyed every little bit of it, even waking up at the crack of dawn on a Sunday morning for a weight session!”

In round one, Ospreys battled hard throughout the day and picked up a 7-0 victory over the Scarlets before narrowly missing out in their next three games. Round two and despite facing the wet weather conditions at the Wern, Ospreys ran out to clinch the victory over the Dragons and grinded out a draw against North-Walians RGC, leaving it all to play for in round three.

“The tournaments have been hard. 20-minute matches are challenging. There’s so much impact and they’ve really tested us as a team. This week we were a lot better than the previous week which shows how vital that game time has played in our development as a team. Hopefully this weekend in Cardiff we can finish on a high and get another two or three wins under our belt to sign off on.

“As a Captain, I’m extremely proud of how far we’ve come in such a short period of time. When we first started and we were practicing our left-handed passes we were dropping every one, now we’re flying!

“Even down to seeing the girls lined up in our Ospreys Women kit and running out as a team, it’s an heart-warming feeling and one I’m proud of.”

Before linking up with the Ospreys U18s, Rogers always had a passion for the game and continued to work on her game growing up:

“I started my rugby journey at Penlan then moved onto play for Gowerton RFC. When I was there, I was the first girl picked to play for Swansea Schoolboys. I kept attending the skill development centres the Ospreys hosted, carried on working on my game, then joined West Swansea Hawks and now here with the Ospreys U18s.

“There’s a lot of us here at the Ospreys who’ve come from West Swansea Hawks and I think it’s definitely helped us as a team. But even those who’ve joined from different teams, we’ve all welcomed each other, become good friends and we’ve all made a bond for life now no matter where our next steps in our careers take us.”

Looking ahead to her future, the 17-year old West Swansea Hawk player’s ambitions have been re-ignited after the announcement of the first full time Wales Women’s contracts were introduced:

“When I first started rugby it was just something to get into. Rugby was my thing to get away from everything and as soon as I was out on that pitch it was like nothing was stopping me. Now seeing those Women with full time contracts and knowing that one day that could be my job is an amazing feeling. When we first started rugby I didn’t have anyone to look up to. No girls, no one. Now I have role models and I can think I want to be like you one day!”

“Hopefully I’ll get picked for this Welsh squad coming up, but if I’m not selected, I’m not going to let my head drop. I want to push on and play for higher teams and hopefully get my chance to play for my country one day.

Even though she’s still a youngster herself, Rogers has a keen message for those younger girls looking to kickstart their rugby journey: “Start up! Rugby literally changed my life and I think it can change anyone’s. I coach West Swansea Hawks little ones and you see them look up to me and the older girls, they see us play and hit hard and then they say “can you teach me how to do this?” It’s incredible. Try it! If you don’t like it, as least you’ve given it a go!”

The Womens U18s Regional tournament will conclude next weekend at Cardiff Arms Park on Sunday 20 February, kick off from 11am.