The Ospreys U18s continued last week’s winning ways when they took on RGC on Sunday afternoon at Colwyn Bay RFC.

Despite the short turn around between Wednesday’s victory against Cardiff Blues and yesterday’s match against RGC for the Ospreys U18s, they rounded off a winning week for the Region as tries from Phillips, Deaves, Thomas, Roderick and Hopkins led to the second win of the week for the young Ospreys team.

Within minutes of kick-off, the Ospreys opened the scoring as RGC were penalised with Joe Hawkins’ successful penalty kick, which took them into an early three point lead.

The Ospreys continued to dominate, and ten minutes into the first half Logan Phillips scored the first try of the afternoon with a well worked move, converted by Hawkins.

It was not long before the young Ospreys were at it again, as openside, Harri Deaves, crossed the line for the Ospreys second try within the first quarter of the game, Hawkins with the extras.

From the restart, the Ospreys were again on the attack as outside half, Declan Thomas, pushed the away side further into the lead with another successful touch down. Hawkins added the extra two points, which took the young Ospreys into a comfortable 24 point lead.

In the closing minutes of the first half, RGC U18s dug deep and fought back as Harri Hughes’ efforts finally put the home side on the score board, with his unconverted try, which took the score to 5-24 at this half way point.

With a convincing scoreline going into the second half, the Ospreys U18s looked to continue their dominance. However, just six minutes in RGC hit back. Their captain, Mathew Buchanan, crossed the line for their second try of the afternoon and Ben Williams with the extras, closed the gap between the two teams and took the score to 12-24.

RGC enjoyed more possession in the second half and, entering the final quarter of the game, the home side’s tight-head prop, Pedr Jones scored an unconverted try to reduce the deficit to 17-24 as they edged nearer to the Ospreys.

The Ospreys immediately responded to RGC’s pressure and regained control of the game. A breakaway try by Bradley Roderick, which went unconverted, took the young Ospreys into a 17-29 lead, with 18 minutes left on the clock.

With 10 minutes left to go in the latter stages of the game, Iestyn Hopkins scored an unconverted try which proved enough to seal the victory for the young Ospreys.

A hard fought game for both sides, but the away side came out on top to make the long trip worthwhile. 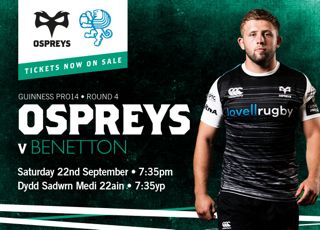