All eyes return to the Guinness PRO12 Championship with four teams still fighting to join Leinster and Munster in the Semi-Finals.

The Ospreys and the Scarlets form the Welsh challenge while Ulster Rugby have it within their control to make it three Irish representatives in the Guinness Final Series.

Glasgow Warriors, who won their first Championship title in 2015, can still make it into the Semi-Finals but they will need to take maximum points from their final two games while relying on other results to go their way.

Glasgow Warriors arrive in Dublin to take on Leinster who will be recovering from their Champions Cup semi-final loss to Clermont Auvergne. If the Warriors are to have any chance of reaching the Guinness PRO12 Semi-Finals they will need to take maximum points against Leinster who have already secured a home berth in the knock-out stages.

Cardiff Blues will continue their build-up to the play-offs for the Champions Cup by hosting Zebre Rugby at the BT Sport Cardiff Arms Park. The Blues have been in terrific try-scoring form of late with 22 tries posted in their last six games and they are a prime contender to score the Championship’s 652nd try of the season and set a new record.

The final game on Friday night sees Edinburgh Rugby welcome Newport-Gwent Dragons to Myreside where the hosts will be eager to record their first win since making the move from BT Murrayfield in January.

On Saturday Munster make their way to Italy to take on Benetton Rugby who have won their last two games at the Stadio Monigo against Ospreys and Dragons. Connacht are also expecting a big crowd for the visit of Scarlets as the 2016 champions play their final home game of the season.

What teams need to qualify for Semi-Finals:

Scarlets: 7 points for a Semi-Final

Ospreys: 8 points for a Semi-Final

Glasgow Warriors criteria: The Scottish outfit need the maximum 10 points from their final two games against Leinster and Edinburgh to stand any chance whatsoever of reaching the Semi-Finals whilst also relying on other results involving Scarlets, Ospreys and Ulster.

If two or more Teams finish with the same number of Championship points, their placings will be determined by the following criteria in descending order:

Ospreys v Ulster promises to be a dramatic affair with both sides aware that victory in the fixture will represent a huge step forward in their bid to reach the Semi-Finals.

Ospreys will be looking to arrest a run of results which have stalled their Championship assault while Ulster will be encouraged with their losing bonus-point performance against Munster in Round 20.

Home advantage and the second-best defence in the Championship will give Ospreys confidence at Liberty Stadium, however, Ulster know that defeat would likely end their ambitions of reaching the knock-out stages for the fifth season in succession. 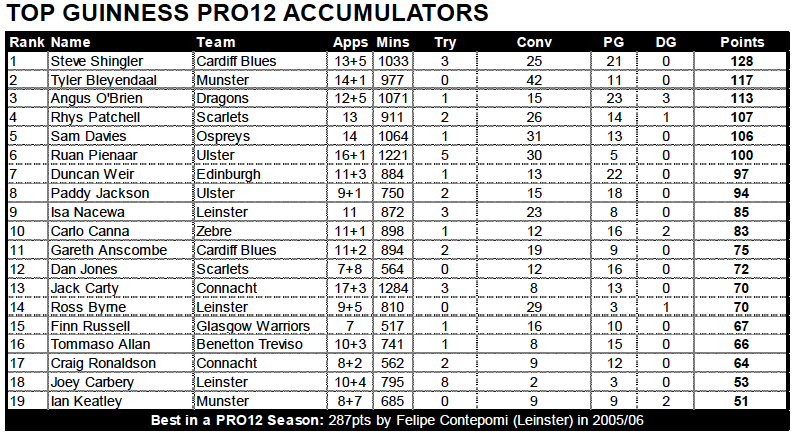 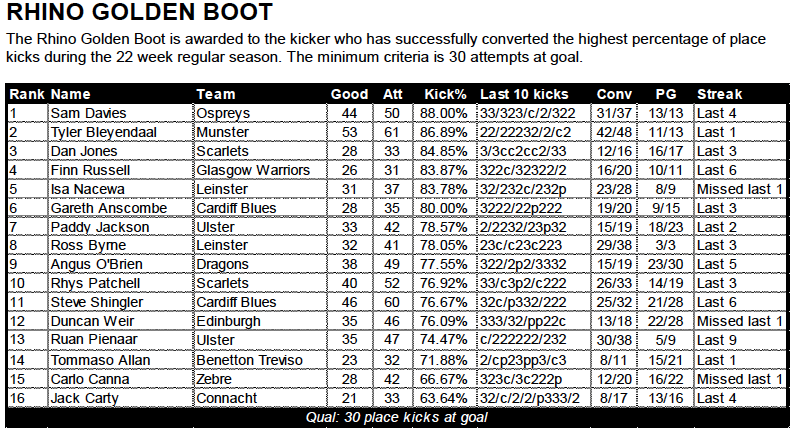