PRO14 Rugby will introduce an exciting change to its Champions Cup qualification process that will see the 7th ranked team decided by a Play-Off match that will form part of the Guinness PRO14 Final Series.

This fresh addition to the Championship has been warmly welcomed by the Guinness PRO14 clubs and will see the two fourth-placed teams from each Conference face off in a winner-takes-all clash to qualify for the Champions Cup.

The fixture will take place on the first weekend of May and home advantage will be awarded to the team who has finished the regular season with the highest match-points total. This move is designed to ensure competitive balance between both Conferences in order to award the final Champions Cup qualification place.

The first six places from the Guinness PRO14 will automatically be claimed by the teams who finish in the top three of each Conference. The South African teams remain ineligible to qualify for EPCR tournaments, so should a South African team finish in either the top three or in fourth place they will be replaced by the team that finished below them in that Conference.

"By the time May rolls around our fans are going to be the big winners thanks to the enlarged Guinness PRO14 Final Series which will see six teams battle for the Championship title and another two going at it to qualify for the Champions Cup. That's double the number of teams who now have something to play for after the regular season ends which is a great result for the clubs, their fans and the tournament.

"We are committed to raising the standards of our Championship and the introduction of the Champions Cup Play-Off brings a dynamic element to European qualification. After careful consultation with our clubs we strongly believe that this is best solution for the Guinness PRO14.

"The new Championship format is off to a fantastic start and it's so important to us that no matter which Conference a club is in, eligible teams have an equal opportunity to qualify for the Champions Cup. By pitting the two fourth-placed teams against each other we're creating a fair fight and giving fans a Cup final style occasion that they can relish." 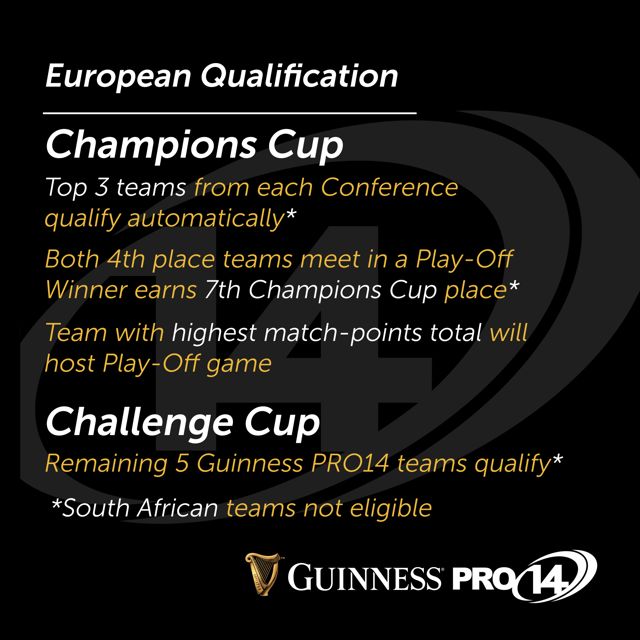