“The pressure is on - but it's exciting”

Mr. Reliable, Dan Evans, says it’s crucial that the Ospreys start the end of season run-in “with a bang” when the Scarlets visit the Liberty Stadium on Easter Saturday.

It’s a must-win game for the Ospreys, currently sitting down in eighth place, two off the Champions Cup qualification slots, and Evans knows that with just five games to play this season, they have to come out on top in the big derby clash.

“Every game is massive from here, and there’s no bigger match to start with than the Scarlets” he said.

“We know what we’ve got to do over the remaining games and it’s crucial that we start with a bang to really get the momentum rolling.

“It’s a big game whenever it is played, but for us there’s more than just local pride on it this time. We know that we need to lay a marker down at the start of these five games and put in the kind of 80-minute performance that can really give us a platform to achieve our aims.

“When you look at the schedule for the rest of the season, you know it’s going to be tough but we have to thrive on that challenge. We’ve done our travelling and don’t go out of Wales again, we’ve got three derby games, and three of our remaining five games are at home.

“Every one of these games is massive now, we’ve got to win every one of them, that’s the size of it, if we want Champions Cup rugby next year. The pressure is on for us right from the first game but it’s going to be a big occasion, with a big crowd, and it’s important that with that unity, with the supporters behind us, we can go on a good run and get what we want from the last five games.” 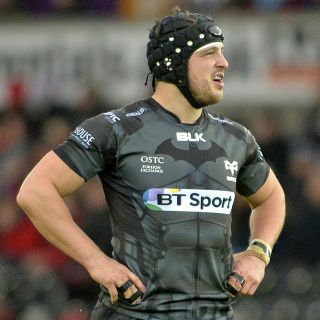 Evans has shown remarkable durability and consistency since signing for the Ospreys ahead of the 2014/15 season, playing in every single PRO12 game and missing just one Champions Cup fixture, recording the second fastest ever half-century for the region in last month’s loss to Connacht.

That puts the 27-year old in a pretty unique position to give his verdict on the next generation of Ospreys coming through the ranks, with an average age of just 23 in the team that faced Leinster in Dublin last time out. He says that recent performances, if not necessarily results, point to the progress that the group has made this season.

“I think, maybe, we didn’t have that confidence in the wider group at the start of the season. It was a young team, the internationals were away at the World Cup, and while the ability and the effort was there, maybe there wasn’t the experience so boys had to learn quickly, on the job.

“You can see how far the boys have come when you look at how we’ve done in a difficult period over the last few weeks. We were unlucky against Connacht who are beating everyone at home, we could have won away in Leinster against a side with huge experience, and we beat Edinburgh and Munster.

“We know that we have the ability within the squad regardless of how young the group is. That’s a huge positive that we can take from this period, not just the boys who’ve been playing but the whole squad, including the internationals coming back in next week.”

Tickets for the BIG one against the Scarlets on Saturday 26th March, 3.00pm KO, Liberty Stadium, are on sale now at the Liberty Stadium Ticket Office. Buy now at ospreysrugby.com/buytickets and beat the match day queues.