Ahead of Friday night’s Munster clash we take a trip down memory lane back to the Ospreys stunning victory over Munster back in 2012 at the Liberty Stadium and the story behind this iconic image.

It was definitely a night to remember, as the Ospreys booked their place in the RaboDirect PRO12 final as they took the honours on home-turf over Munster.

It was the Ospreys third consecutive semi-final, and their win set them up for a rematch of the 2010 final – the first ever – when the Ospreys claimed the trophy in Dublin, defeating Leinster at their home ground. The region then went on to do this and lifted the trophy at the RDS Showground once again to claim a record breaking fourth league title.

It was the worst possible start for the home team, with Munster grabbing a try with just 138 seconds on the clock through Ian Keatley.

However, undeterred, the Ospreys responded positively and Biggar chalked up his team’s first points of the night five minutes later with a penalty from the 10m line after Munster were caught going off their feet at the breakdown.

His try, the Ospreys first of night, followed shortly after as Ryan Jones offloaded to Biggar who went over for what was his first try of the season. He then picked himself up to add the extras, taking the score to 10-7 with 12 minutes gone.

After Richard Hibbard had been caught offside, Keatley made no mistake to level things.

The Ospreys hit straight back with a Biggar penalty after Simon Zebo came into a ruck from the side putting the Ospreys back in front and taking the outside half over 300 points for the season.

Biggar brought up the half-hour mark by taking his, and the Ospreys, tally up to 16 with a simple penalty after Donncha O’Callaghan broke around four laws in one at the breakdown.

Minutes before the half-time whistle, a turnover ball just outside their own 22 allowed the Ospreys to launch a stunning counter attack. Richard Fussell, taking advantage of a Munster player slipping, gained more than 50m before passing the ball inside to Joe Bearman, who kept up the momentum before supplying the scoring pass to Fotuali’i, who went under the posts, allowing Biggar to round-off the first period with a simple conversion to put the Ospreys 13 points ahead.

The Ospreys went on to completely dominate the second-half, as they scored a further three tries.

From the restart, pressure at the scrum saw the Ospreys being awarded another penalty, Biggar making no mistake to move his team 16 points clear with half an hour left to play.

Next, a tremendous turnover from Justin Tipuric allowed the Ospreys to attack from halfway with real purpose. Fotuali’i freed Fussell who carried at pace, drawing the tackle before releasing Dirksen who scorched his way up the right to score his side’s third try of the night in the corner.

Biggar was just off target with his conversion attempt, leaving the score 31-10 to the Ospreys.

The Ospreys fourth try came just after the hour. The ball went wide to Dirksen who tried to barge his way over with no luck, but the Ospreys reset then came back infield where Andrew Bishop was able to crash over between the sticks, leaving Biggar with the simplest of kicks.

There was still time for a one more Ospreys try as nother well worked move saw the Ospreys sweep upfield for a fifth, started and finished by Webb.

With a record 45-10 win over Munster, fans and players celebrate an historic win that sealed the Ospreys’ spot in the Grand Final. 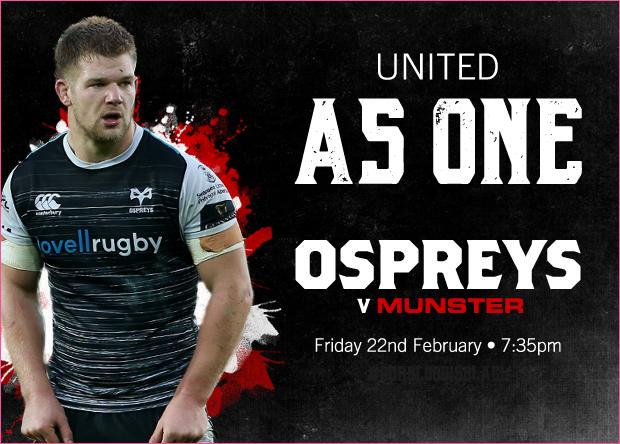