Ahead of Saturday’s game against Connacht, we take a look back at the first game of the 09/10 season and the story behind this iconic image from our history.

Not only was it All Black legend Jerry Collins’ Ospreys debut, he also secured the only try of the game to get the’ Magners League campaign off to a winning start at the Sports Ground in Galway, kicking off a long season which culminated in a third league title for the Region.

The weather conditions proved a challenging hurdle throughout the game, but the Ospreys dug deep and showed real character to overcome the typical Galway driving wind and rain.

Trailing 6-3 at the break after enduring 40-minutes of playing into the strong wind, but a promising second-half performance saw the visitors take control.

In the opening exchanges, it was the home team who applied the early pressure, aided by the wind at their backs, but it was the Ospreys who were on the scoreboard first, Dan Biggar dropping a goal in the 10th minute.

As the rain began to ease and the early evening sun started to break through, Connacht levelled through Ian Keatley after the Ospreys were penalised for a push in the lineout.

Minutes later, Keatley was once again a thorn in the Ospreys side making a break from halfway, and when the Ospreys infringed in the ruck, he was able to slot home his second penalty to make it 6-3 to Connacht. Shortly before the half-time whistle, the Ospreys were reduced to 14 men when Andy Lloyd was sent to the sin bin. Despite this disadvantage, the visitors were able to hold until half-time without difficulty.

Playing with the wind in the second-half, it didn’t take long for them to pull level, Biggar scoring with a 44th minute penalty. This was shortly followed by two Connacht yellow cards in the space of four minutes that reduced them to 13 men, debutant Mike McComish was the first to enter the sin bin in the 54th minute, before he was joined by scrum-half Frank Murphy.

The Ospreys capitalised on this advantage as firstly, Biggar added three points to give the visitors the lead, before Jerry Collins marked his debut with a try as the forwards rumbled over the line from close range. Biggar converted to make it 16-6 with 20-minutes remaining.

However, Keatley kept the home side in touching distance with another successful penalty. The final word went to Keatley, who rounded off the night’s scoring as his boot found the posts for another penalty in the final minute. Whilst this was not enough to catch the visitors, it secured a losing bonus point for Connacht. 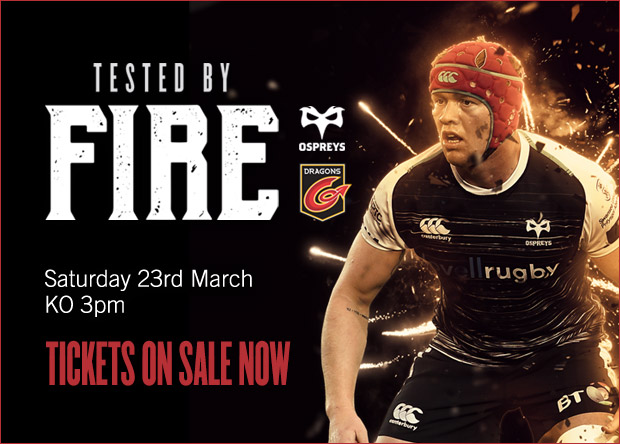