While the Ospreys were getting back to winning ways at Stadio Comunale di Monigo in Treviso on Saturday afternoon, the region’s Wheelchair Rugby team was also in action out in Italy.

They went up against I Dogi, a representative side for the Venetian region on the morning of the Ospreys’ PRO12 game against Benetton Treviso with a game played at Silea Sports Hall in the town.

I Dogi, including three Italian internationals, proved too strong for the Ospreys, coming out on top 65-35. The two teams are planning to meet again in Wales in the New Year.

The Ospreys Wheelchair Rugby travelling party shared the same hotel as the Ospreys senor team in Treviso, players mixing together ahead of the matches, with the Ospreys represented at the Wheelchair contest before heading to the ground for their own PRO12 clash – where the team were grateful of the vocal support received from their colleagues. 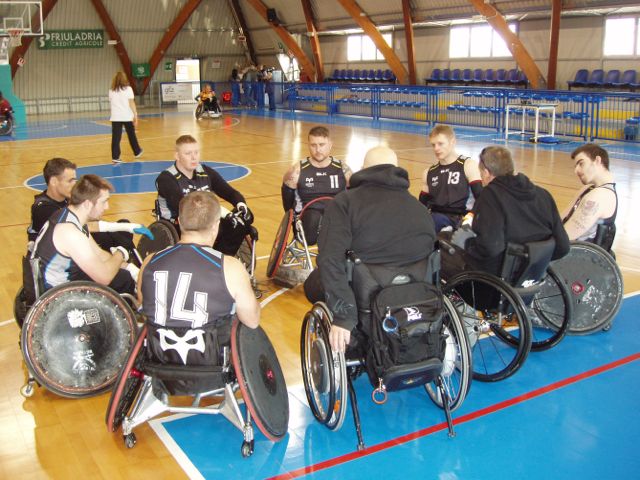 "On the Saturday morning out in in Treviso, the Ospreys Wheelchair Rugby boys were tremendously encouraged to see at the side of the pitch Steve Tandy, Andrew Millward, Roger Blyth and Yarnie Guthrie, from the senior Ospreys Management, who had come along to support them.

“It meant an awful lot to the lads that these individuals had taken time out of their own busy match day schedule to support the region's wheelchair rugby team. Likewise, the wheelchair team were also very grateful for the presence at their match of a number of  Ospreys fans  who turned up to cheer them on before heading off for the senior's game at Stadio Communale de Monigo in the afternoon.

“Whilst the result didn't go our way on the day, it was a positive experience in that the wheelchair rugby team need to be playing quality sides like this Italian one in order to improve their performances which will then hopefully lead to promotion to Division 1 of the National Super Series in the UK.

“There is longer term  talk also of a possible PRO12-type model for the wheelchair game in the next few years and so the team needs to familiarise itself with the rigours of travelling significant distances and playing. The encouragement from many of the professional Ospreys players as they interacted with the wheelchair boys in the hotel that we were sharing had many positive spin-offs for our lads, for which we are very thankful."

Two of the players who spent time with the wheelchair squad were Cai Griffiths, who is an ambassador for Ospreys Wheelchair Rugby, and Gareth Delve. Cai said:

“I’ve said before what an incredible sport wheelchair rugby is to watch and my involvement with the Ospreys team has given me an even greater appreciation of the skill and courage needed to play the game. It was great to be sharing the hotel with the team in Treviso, hopefully we can continue to work together so that Ospreys Wheelchair Rugby becomes an even bigger part of who and what we are.” 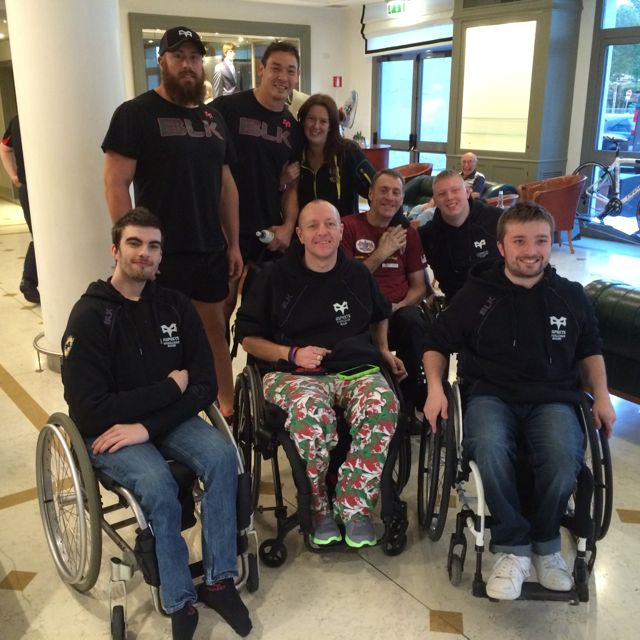 “Meeting the boys and spending time with as they prepared for their game on Saturday morning was an eye opener.  The effort and commitment they put in is incredible and we are very luck to have them as part of the Ospreys family.”

Having taken time out of pre-match preparations to go along and watch the wheelchair action, Tandy said:

“I was blown away by how physical it is, it was quite brutal at times. As tough as it got on the rugby pitch at times when I was playing I’m not sure I’d fancy a go at what I enjoyed watching on Saturday morning!

“Seriously though, these guys are pretty inspirational characters and our involvement with them as had an impact on everybody at the Ospreys. I think it’s absolutely fantastic that we have such close ties, and as wheelchair rugby grows as a sport those ties are only going to get closer.”

Following the tie up, the team was rebranded under the Ospreys banner now play and train in officially branded BLK kit featuring a newly updated version of the famous Ospreys mask.

The team is made up of largely from players and coaches who have previously represented the Pirates, originally established in 1989, and currently competes in Division 2 of the GB Super Series, doing battle against teams from across the UK.

Anyone interested in trying out with the Ospreys Wheelchair Rugby team should contact Head Coach, Paul Jenkins, on 07718 171672.

Potential volunteers looking to assist, or sponsors who would like to support the team, should contact Amanda Thomas, Regional Development Officer (Wales & South West), Great Britain Wheelchair Rugby, on 07950 545014 or via email at amanda.thomas@gbwr.org.uk.

Alternatively, you can contact Fran Jenkins, Secretary of OWCR, on 07970 400565 or email ospreys.wheelchair.rugby@gmail.com