We kick off our final home game of the season against the Dragons this Saturday (K.O 3pm) and we have lots of activities happening before and after the game!

This Saturday’s game is building up to be a huge occasion as we welcome back our Internationals from the Welsh camp, as well as the race for the playoffs heating up. Your support will be absolutely crucial for our final home game as we then take to the road for the remaining three fixtures.

We’ll have lots of activities ahead of the game this weekend!

We’ll be joined by the Ospreys choir around the stadium and the D-Fibs will be performing in the Riverside!

Ospreys Wheelchair Rugby will be holding a bucket collection around the stadium ahead of the game, all donations will be greatly received.

Turnstiles open for the final time this season!

We’re not only joined by our Grand Slam heroes at the game, we’ll also be joined by the Ospreys U18s Women’s team who were recently crowned U18 Regional women champions! We’ll be catching an interview with the girls and presenting them with their trophy so make sure you’re in the stadium to congratulate the girls.

Player warm-up, we came up with our own playlist ahead of the game! 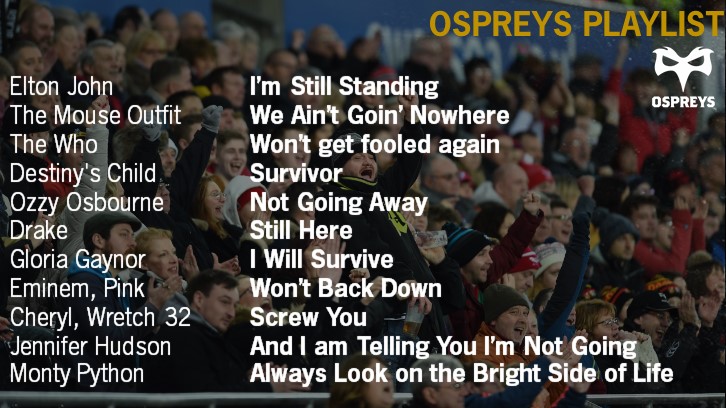 Players emerge from the tunnel, joined by our first half guard of honour, Pontardawe U9s and our first half flag bearers Loughor U6s,  Dunvant U8s, Beaufort RFC and Uplands U7s and U14s.

Our brand-new Canterbury pitch flag will be held by Tata Steel U15s.

We ran an exclusive competition for our game for 15 mascots to run out alongside the team, so make sure you cheer them on as well as the team!

The rugby doesn’t end at half time because half-time tag is back!! We’ll be joined by 10 teams at half-time so make sure you show the youngsters your support!

Post Match - It’s become a well-established Ospreys tradition for the final home game of the season to be rounded off in this way. Once the final whistle has been blown on what will hopefully be a famous Ospreys win to keep the team well and truly in the Guinness PRO14 playoff race, the squad will stay out signing autographs and posing for photographs, getting to know the people they represent when wearing the black shirt.

Supporters are encouraged to remain in the stands at the final whistle and, once post-match formalities have been concluded, the players will return to the field before joining supporters on the side-lines. 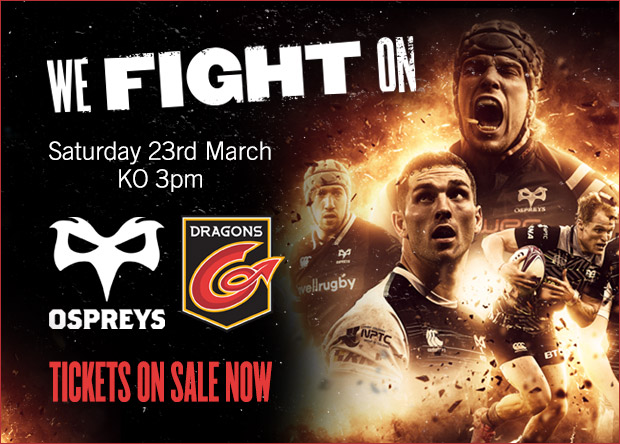