Ospreys Rugby are delighted to unveil the brand new home and away playing strips for the 2015/16 season.

The new-look kits were revealed simultaneously on Saturday morning in a special launch event at the Liberty Stadium and on social media via a #kitselfie campaign that saw the players taking their own launch photographs of themselves in the full home strip.

Created by global kit suppliers BLK, the stunning new jersey is once again expected to be among the biggest selling club or regional shirts in the UK and Ireland, continuing a phenomenon that goes back as far as 2006 when the Ospreys jersey established itself as the second biggest seller – a position it has held ever since.

“We all know how popular the Ospreys jersey is in terms of sales. We’ve worked long and hard over the last decade to put the business in the position where the release of the new Ospreys shirt is a landmark occasion for supporters, commercial partners and the team itself, with all eyes on the launch to see what innovative designs we’ve come up with this time.

“BLK came on board with us last year and have really helped us take things to another level, in terms of both quality and design. The 2014/15 range was our best to date but we genuinely believe that this year we have gone one step further again with a design that supporters will love wearing as much as our players do. We’ve listened to their feedback on last season’s kit and created something that is eye-catching, fresh and exciting.

“To be able to share the launch with the hundreds of supporters who attended the Liberty Stadium today, and our thousands of followers on social media, was special, and a great way to kick off the new season.” 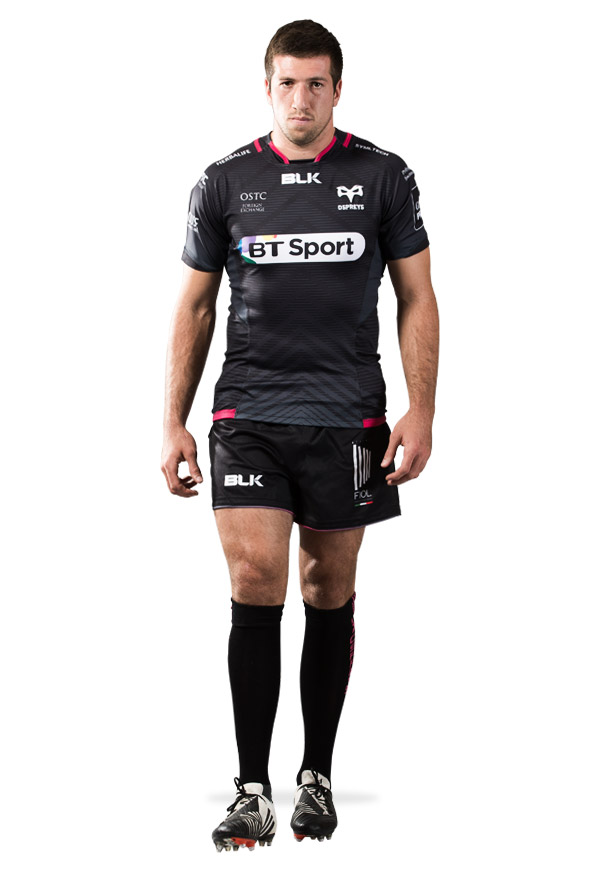 The new 2015 home kit takes modern simplicity to a new level of sleekness.

The sleeves feature gradient tones of gunmetal through to black, which ties in perfectly with the gunmetal side and underarm panels.

The jersey is completed with an impressive gradient hem trim and back neck panel, which incorporates magenta and gunmetal to give this jersey a unique and powerful finish.

In stark contrast to the home kit, the new away kit integrates more of the magenta colour palette, incorporated into the region’s traditional white alternate colour scheme.

The innovative design sees an Ospreys mask pattern subtly incorporated into the jersey’s gradient fades. From a distance the detailed pattern creates a bold stripe effect that fades into the white base of the lower half of the jersey. The contrast side panels also feature a gradient blend of magenta and gunmetal adding more vibrancy and colour to the garment.

“We are delighted with the new Ospreys jersey, which offers the perfect balance between tradition and innovation.

“Ospreys supporters expect something innovative from their team each year, and with the splash of magenta incorporated into the 2015/16 jersey, and the garment technology that helps make this the best fitting kit yet, it promises to be a real hit.”

The new Ospreys home and away jerseys, along with the full range of BLK merchandise, is now available to buy instore at the Ospreys Club Shop and online at shop.ospreysrugby.com.

The adult replica jersey comes in sizes ranging from S-7XL, with a ladies version available (home only) in sizes 8-20, both versions priced at £54.99.

Replica shorts are available in junior and adult sizes, priced from £19.99, with replica socks starting at £10.99.

Once again BLK has incorporated the latest in garment technology and fabric into the design and production of the Ospreys kit.

The jerseys have been produced using BLK’s Exotek fabric throughout the main body.

Exotek has been designed and developed exclusively by and for BLK to enhance athlete performance and maximise player comfort. Exotek is the strongest, lightest, most breathable and soft-to-touch fabric ever utilised by BLK.

The player’s jersey is specifically cut and tailored to meet the shape and contours of the athlete’s body and features a combination of three fabrics, strategically engineered to provide maximum player comfort and manoeuvrability on the field.

Each garment features seam free Lycra underarm panels, a lycra neck opening, and Exodry side panelling to wick away sweat and moisture. All seams and panels are finished with reinforced cover stitch seams for added strength.