Ospreys team to play the Scarlets

The Ospreys team to play the Scarlets at the Liberty Stadium on Saturday 7th October 2017, KO 7.35pm, is as follows:

Dan Biggar makes his 150th appearance in the competition

The following players were unavailable for selection due to injury

“Derby matches are games that get everybody excited and Ospreys v Scarlets is up there at any time as a fixture you want to be involved in.

“The form book is pretty clear. We’ve got the champions and Conference B leaders coming to the Liberty Stadium and we know that nobody outside of our environment will be predicting a home win. The Scarlets will be pretty clear favourites and we’ll be the underdogs but we have to ignore that and look at ourselves and where we need to improve on recent weeks.

“It’s a big occasion with a big crowd and, like any derby match, will be fast and physical. What has happened in previous games won’t count, it’s all going to be about what happens on the night. We know that we have to start well, build momentum and build our game by playing in the right areas and making the right decisions. The Scarlets have shown, last season and this, that if you make mistakes they will punish you from anywhere on the field so we have to be accurate or we’ll pay the price.

“With a big crowd we need the Ospreys support to get behind us and really help push the boys on in what will be a tough contest, one that we are really looking forward to.” 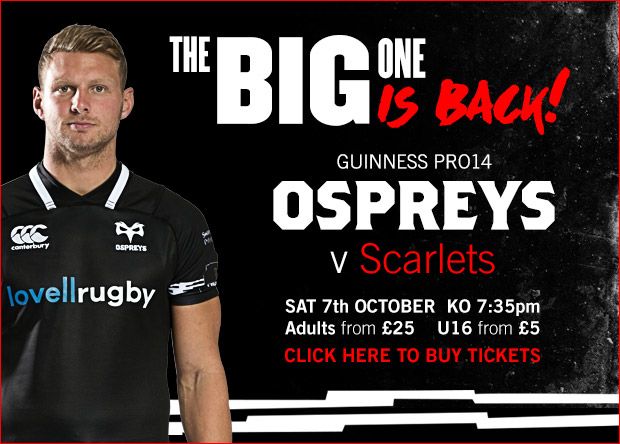