The Ospreys team to play Edinburgh at the Liberty Stadium on Friday 31st August 2018, KO 7.35pm, is as follows:

”Pre-season has been enjoyable but demanding preparing us for competitive business with our first league test on Friday night. In truth it has been our focus since day one after we reported back from the summer break."

“To achieve our aims this season we need genuine competition for places and in turn growth in our squad depth. Quality teams have depth in every position which creates healthy selection dilemmas."

“Selection has been based on performance throughout pre-season training & the two games against Saints & Saracens. Across the squad there are players who’ve impressed, who've put their hands up for selection resulting in some tight calls. For those selected the challenge is to embrace the opportunity, while others will channel their disappointment positively."

“For the Ospreys to be successful, it’s not just about the starting fifteen on Friday, or the matchday 23. It’s a long season and everyone has a huge part to play in achieving our team goals". 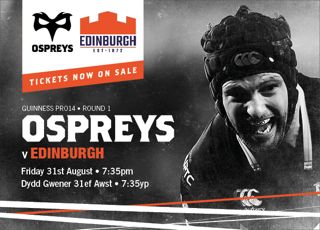