Ospreys Rugby are delighted to announce the signing of flanker Guy Mercer from Bath on a season long loan.

The 27-year old linked up with his new team-mates at Llandarcy Academy of Sport on Wednesday, joining the squad as they prepare to kick-off the new Guinness PRO14 season this weekend, against Zebre at the Liberty Stadium (Saturday, 2.30pm KO).

After swooping to secure the services of the openside, who started Bath’s pre-season games against the Ospreys at the Liberty and Leinster at Donnybrook, as well as featuring off the bench against Bristol earlier in the month, Head Coach, Steve Tandy, welcomed the “quality and experience” that Mercer will bring to the Ospreys. 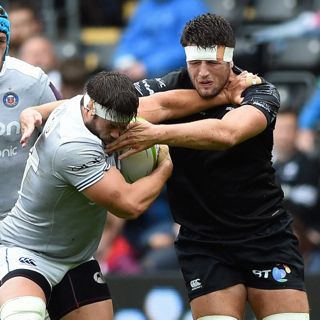 “It’s no secret that we’ve been a bit light in back row numbers” said Tandy.

“To pick up a player of Guy Mercer’s quality and experience is excellent news for us and will give everybody a boost ahead of the PRO14 kicking off this weekend.

“He’s really keen to come down here and get started pushing himself in the right direction and competing for selection. He will provide another quality option for us.

“He is a quality player and person, someone who is a natural leader, which will stand us in good stead right the way through the season. You don’t become club captain at Bath if you don’t possess certain characteristics and we are looking forward to seeing him bring those credentials into our environment.”

Mercer arrives at the Ospreys after making more than 120 senior appearances for Bath since graduating from the club’s academy system. At 1.81m tall and 100kg, he is a physical openside renowned for his work at the tackle and breakdown areas.

His leadership skills saw him confirmed as club captain at the Rec last season and Tandy believes that he can swiftly establish himself as a senior figure at the Liberty.

“He will really add to our depth” the Ospreys head coach continued.

“Sam Cross came in last week and I thought he did really well up in Leicester so all of a sudden we are getting more options in the back row department.

“Guy is still only 27 but has bags of experience at the top end, in the Premiership and European Cup, and with that leadership ability as well, he can do an important job. He’ll be available all season round and when you look at those international windows when we lose a lot of experience, having someone like Guy around will be invaluable.

“He’s not coming to just make the numbers up or provide cover, he is a competitor and he wants to be playing in the big games so the increased competition for places will benefit everyone.”

Mercer joins Welsh internationals Cory Allen and James Hook as new faces for this season, alongside Sam Cross of GB and Wales 7s, who linked up with the region last week.