Ospreys stay on the road with Euro Commercials

One of Wales’ leading commercial vehicle dealerships has teamed up with the Ospreys to assist with the transport of essential rugby equipment.

Euro Commercials, Mercedes Benz chosen commercial vehicle dealership in South Wales and providers of Mercedes Benz truck and van parts, service and repairs from its four depots situated across the Welsh stretch of the M4, have provided the region with the impressive new Sprinter 313CDI, which will be used for carrying team kit, rugby and medical equipment to away games across the UK and Europe in the PRO12 and European Rugby Champions Cup.

The keys to the specially branded, fuel efficient Sprinter Panel van, the largest in the Mercedes-Benz Vans range, were handed over to a group of senior players, including Dan Baker, Paul James, Alun Wyn Jones, Dan Lydiate and Dan Baker at the Liberty Stadium by Andrew Copp from Euro Commercials.

Euro Commercials have also provided a Sprinter 313 on a temporary measure for use by the Premiership Select team around their British & Irish Cup campaign.

“Our relationship with Euro Commercials is now entering is fifth year and is going from strength to strength. Our aim is always to provide maximum value and grow our commercial partnerships and that is certainly the case in this instance.

“We are extremely grateful to Euro Commercials for their ongoing support, and for the provision of a fantastic vehicle which makes the logistics team’s job so much easier, not to mention their support of another of our commercial partners, OSTC, on their charitable exploits earlier in the year.

“The assistance of successful and market leading local businesses such as Euro Commercials allows us to provide the very best facilities to our support staff, with the obvious performance benefits on the field. We hope this will long and mutually beneficial relationship will continue to grow.”

Established since 1980, Euro Commercials has grown to employ over 170 staff today. Recent investments include on site servicing and 24 hour opening at three out of its four depots and the opening of a state of the art Van Center, Ipswich Road, Cardiff. 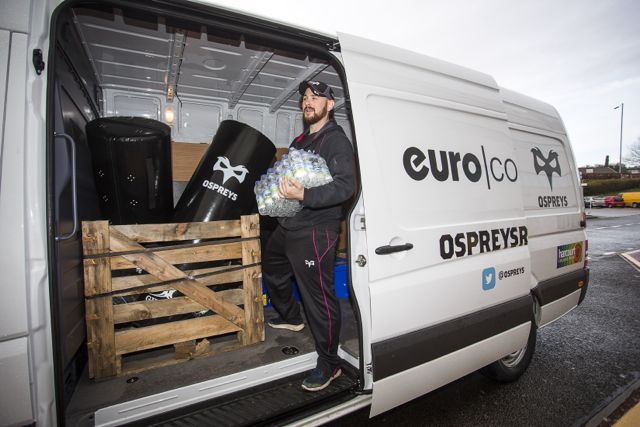 The company has a long-standing rugby link through Sir Gareth Edwards, who is a shareholder in Euro Commercials.

“We are delighted to continue our support of the Ospreys. Meeting the team at the Liberty Stadium recently, it was clear how much everybody values the support we give them which is very satisfying for everybody at Euro Commercials. Long may we continue transporting the kit and equipment across Europe, helping bring success to the region."