Two leading rugby clubs from the Ospreys region are set to gain Europe-wide exposure thanks to a long-term commercial partner of the region.

Worthington’s have handed over their slot on the back of the Ospreys jersey for the two upcoming European Rugby Champions Cup games in France due to restrictions in French advertising law surrounding alcohol companies.

The Ospreys face Clermont Auvergne at Stade Marcel Michelin on Sunday afternoon, and then return to France next month to play Bordeaux Begles at Stade Jacques Chaban-Delmas.

The region’s players normally carry the Worthington’s logo across the shoulders of their match day jersey, but legislation in France prohibits alcohol companies from advertising during sports events.

Rather than blank out the logo for the matches, Worthington’s have decided to honour the two leading rugby clubs in the region among their customers, recognising the importance of the relationships Worthington’s have with the rugby community of Ospreylia.

The first club to be honoured, this weekend, is Morriston RFC, who will take pride of place on the back of the Ospreys jersey when they go into action in the Massif Central, the name of the club featuring on the kit in the same typeface as the Worthington’s logo. 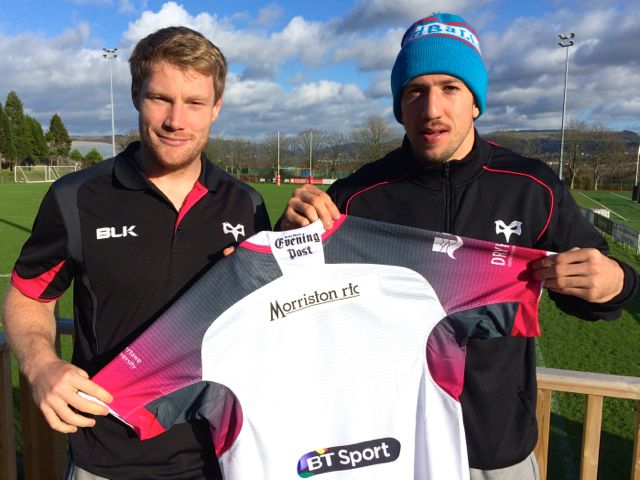 “Worthington’s are a long-term supporter of rugby in this region, not just as a partner of the Ospreys but of many of the clubs that are the heartbeat of their community.

“The law in France means that we were faced with having to blank out our logo. Rather than do that we have chosen to honour grassroots clubs from the region, with Morriston RFC selected to represent Worthington’s and the Ospreys in France this Sunday as a leading customer of ours.

“With a full house in the stadium and hundreds of thousands watching on television at home or at their local club, the eyes of the rugby community will firmly be on Morriston RFC this weekend.”

“This is a fantastic initiative by Worthington’s, turning what could have been a difficult situation due to French advertising law into a positive one which celebrates community rugby clubs from the region.

“We have a fantastic relationship with Morriston RFC, they have hosted the Scouts Day rugby activity, they are hosting TagFest next weekend, and are junior section are regular attendees at the Liberty on a match day, so we are delighted that Worthington’s also value them as a key partner and are recognising them in this way.

“No doubt everybody at the club will take great pride in seeing their name on the back of the Ospreys shirt.”

The identity of the club who will feature on the jersey when the Ospreys play in Bordeaux will be revealed in the build-up to that game in December.