On a night of high drama at BT Sport Cardiff Arms Park, the Ospreys won two of their matches to progress to Singha Premiership 7s Finals Day for the first time.

After picking up a losing bonus point against hosts Cardiff Blues in the opening match of the evening, the Ospreys showed plenty of flair as they saw off defending champions Newport Gwent Dragons before a thumping bonus point win over the Scarlets as they finished in second place behind the hosts.

Both the Ospreys and the Blues now look forward to a day out at the Ricoh Arena in Coventry on Sunday 7th August.

With just 65 seconds on the clock in the opening game, the Ospreys took the lead, referee Craig Evans awarding a penalty try and showing a yellow card to Owen Jenkins of the Blues after he took out Morgan Williams with a deliberate trip as the former RGC man looked to collect his own chip through.

The score was unconverted but the Ospreys soon stretched their lead through skipper Jonathan Spratt who showed good vision to link with Dafydd Howells before receiving the scoring pass himself to dab down in the corner.

The first half was one-way traffic, all Ospreys, but the first moment of quality from the Blues saw them reduce the deficit with time up. It was Jenkins, back on the field who was able to hold off Spratt and Steff Andrews in the corner to offload to Adam Thomas who caught it on his bootlaces before diving over for an unconverted score. That meant the gap was five points at the turnaround.

The Blues were on the offensive straight from the restart and they were able to work an overlap on their left where Jenkins was able to put the ball down close to the touchline to square it at 10-all.

With the hosts now on top, Luke Crocker went over to give the Blues the lead for the first time with just a minute to play and Ben Thomas slotted over the first successful conversion of the contest in the 12th minute.

There was still time for the Ospreys to strike for a third time, Howells setting up a simple walk over for Jay Baker following a charge down on the Blues line, but the conversion with just four seconds remaining was off target, meaning the Ospreys had to settle for a losing bonus point.

The region’s second game of the night saw the Ospreys taking on reigning Singha Premiership 7s champions Newport Gwent Dragons, who defeated the Scarlets 26-12 in their opening fixture.

It was the champions who led inside 40 seconds, Elliot Frewen going over in the corner to give the Dragons a 5-0 lead.

The Ospreys hit back with a length of the field break, David Evans winning a turnover inside his own 22 and Steff Andrews was able to race upfield to score under the posts, Joseph Scrivens with the extras to put his team ahead.

As half-time approached it was Spratt pulling the strings in midfield, releasing Scrivens on halfway who cruised through a gap in the Dragons defence to go through under the posts before converting the try, which took the scoreboard to 14-5 in the Ospreys favour.

It was Spratt who grabbed his team’s third try of the game, and his second of the night, early in the second half, taking advantage of a Dragons error to pounce on a loose ball and score under the posts, Scrivens’ third conversion of the night.

A big overlap on the Dragons left then allowed Jonny Lewis the simplest of finishes, Ethan Davies converting to reduce the deficit further, and with two minutes remaining the scoreboard read 21-12 in the Ospreys favour.

There was still time for the champions to claw themselves even closer to the Ospreys and claim a losing bonus point, and it was Lewis who went over on the left once again, a lovely show and go giving him space to score. Davies again converted but the win was the Ospreys’ despite the late rally.

Cardiff Blues defeated the Scarlets 22-12 in Round 4 to secure their top two finish with a game to play and end the West Wales region’s hopes.

After a short break, it was the Scarlets who provided the opposition in the Ospreys’ final game of the evening.

The first try of the game went the way of the Ospreys, showing good patience when pinned back on their line, keeping the ball alive to create space for Baker on the left who was showed great pace to go the whole field to score. Scrivens converting.

It was all Ospreys and after Howells was held up on the line as he looked to ground it, try number two did come soon after. It was David Evans with a simple finish after great work from Baker and Spratt.

Leading 12-0, the old man of the squad Spratt then showed great skill with a behind the back pass to release Scrivens on the left who went over for try number three.

With time up in the first period the Scarlets were eventually able to get some territory and it was former Osprey Nathan Edwards who crashed over from close range, but his team trailed by 12 points.

Rhodri Davies thought he’d scored the Scarlets second two minutes after the restart, haring towards the corner, but it was fantastic work from Steff Andrews to get back and pull him to the ground, denying him a certain try that would have brought them right back in it.

Then, just a minute later, it was Andrews who was able to take the ball on halfway and go all the way to grab the crucial fourth try to secure a bonus point. Another conversion from Scrivens meant the Ospreys took the game 24-5.

With the Ospreys hopes resting on the outcome of the final game, between the Blues and the Dragons, there was a nailbiting finish that saw the Blues steal the win with the final play of the night, Dane Blackler scoring under the posts to level things at 22-22 and time up, the conversion securing victory and, with three from three, first place.

The win eliminated the Dragons, with the Ospreys taking second spot and looking forward to a day out in Coventry in two weeks time. 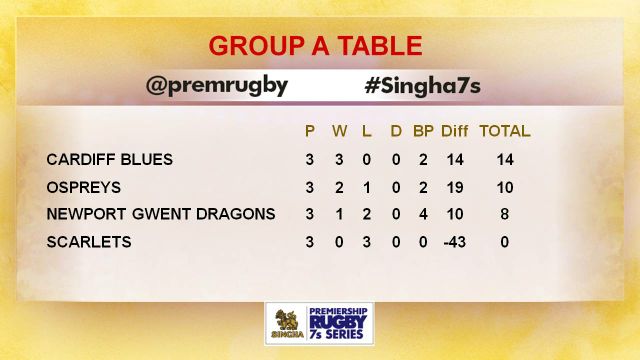 Tickets for the Premiership Rugby 7s Series Final on Sunday 7th August at the Ricoh Arena are now on sale here...