Attacking from the first whistle the Ospreys wasted no time in stamping their mark on the game and, with only five minutes on the clock, Jay Baker,  a hat-trick scorer against the same opponents last weekend, blasted through the Eagles defensive line to open the scores. Matt Aubrey’s conversion went wide but the Ospreys PS were 5-0 ahead.

It was only a few minutes later that centre, Kieran Williams, made a break and ran in under the posts to double the scores. Phil Jones slotted the conversion over to put the hosts ahead 12-0 with just over ten minutes played.

Playing a great style of running rugby, the Ospreys then ran the ball out from their own 22 and went the length of the field. almost securing a third try, but Luke Price was brought down before he could offload to his wing who would’ve been clear to score.

However, the third try wasn’t long in coming. Securing a scrum on Connacht’s try line and powering through the phases, quick play by Phil Jones saw the fullback going over the whitewash before converting his own try to extended the Ospreys lead to 19-0 at the end of the first quarter.

Denying their guests any possession, the young Ospreys made quick work of a scrambled Connacht defence, and Baker looked to put his name on the score sheet once more shrugging off tackles and securing his sides bonus point try before the half time mark. Jones adding the extras left Connacht  trailing 26-0.

Seconds before the half time whistle rang Connacht finally got their side of the scoreboard moving. Strong defence by the home side held the visitors at bay as the phases tally went into double figures, but Connor Lowndes snuck through under the posts for his sides first of the afternoon., Luke Carty converting.

Despite already securing their bonus point, the Ospreys PS weren’t about to take their foot off the gas anytime soon.

Five minutes into the second half, great attack by the pack and quick offloading to Joe Thomas, put the centre over in the corner for the sides fifth of the afternoon. The conversion could only skim the front of the posts, but the Ospreys held a comfortable lead at 31-7.

Five minutes later, another good show of running rugby and quick offloading to wing Tom O’Flaherty made it 6 tries but, again, it went unconverted.

With the Ospreys ontinuing to dominate territory and capitalising on Connacht’s mistakes  try number seven was scored by Matt Aubrey, crashing over in the corner. Phil Jones was on target with his boot to extend the lead to 43-7 with twenty minutes left on the clock.

Connacht Eagles showing signs of attacking back but the Ospreys side were too strong, hurtling the Eagles winger into touch inches from the try line, and it wasn’t long before the pack were back up field into Connacht’s 22.

Following his earlier break, it was deja-vu for  Williams, who broke through the defencive line again to score under the posts. A successful onversion by Aubrey brought up the 50-point mark with less than ten minutes left.

Before the scoreboard had even updated great pace from Andrew Claypole made it nine tries for the hosts, the score unconverted.

Connacht finally got reward for their efforts, Stephen McVeigh capitalising on an Osprey mistake and going over the line for his sides second try, Luke Carty converting as the game drew to a close.

“It’s great to get the win again and back up the result we had out in Connacht last week. The most pleasing thing though was the performance the boys put in. They showed a lot of learning from last week and transferred what we had worked on in training into the game. We can definitely take confidence from the last two weeks, which will hopefully stand us in good stead for the next two rounds in the new year.”

The Ospreys PS will resume their British and Irish Cup campaign in the middle of January where they will take to The Old Parish Ground in Maesteg to face Cornish Pirates. The date and time are yet to be confirmed but will take place on the weekend of 13/14/15th January. 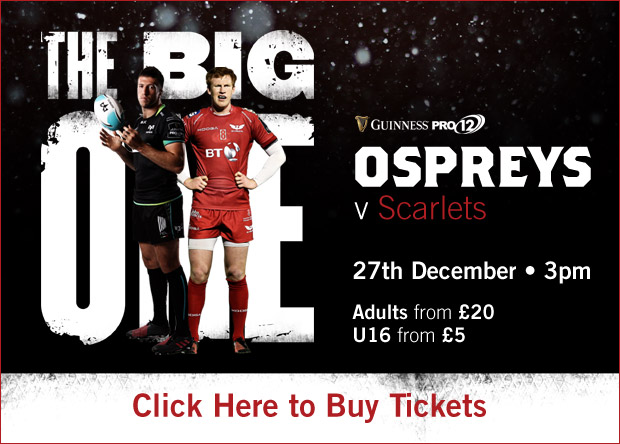