The Ospreys will go into European battle this month with a new look after the unveiling of a special jersey today that will be worn throughout this season’s European Rugby Champions Cup.

Like the home and away jerseys launched in the summer, the new Euro shirt has been produced by global kit suppliers BLK, and combines the region’s traditional colours with a modern, stylish, twist.

The new jersey, which was shown off publicly for the first time today by Alun Wyn Jones at the ERCC tournament launch in Dublin, has a traditional Ospreys black core and features black and grey hoops across the front of the body.

The cyan and yellow colour scheme from this season’s away jersey and training kit also features on the European shirt, with cyan piping around the collar and sleeve and yellow piping on the body. 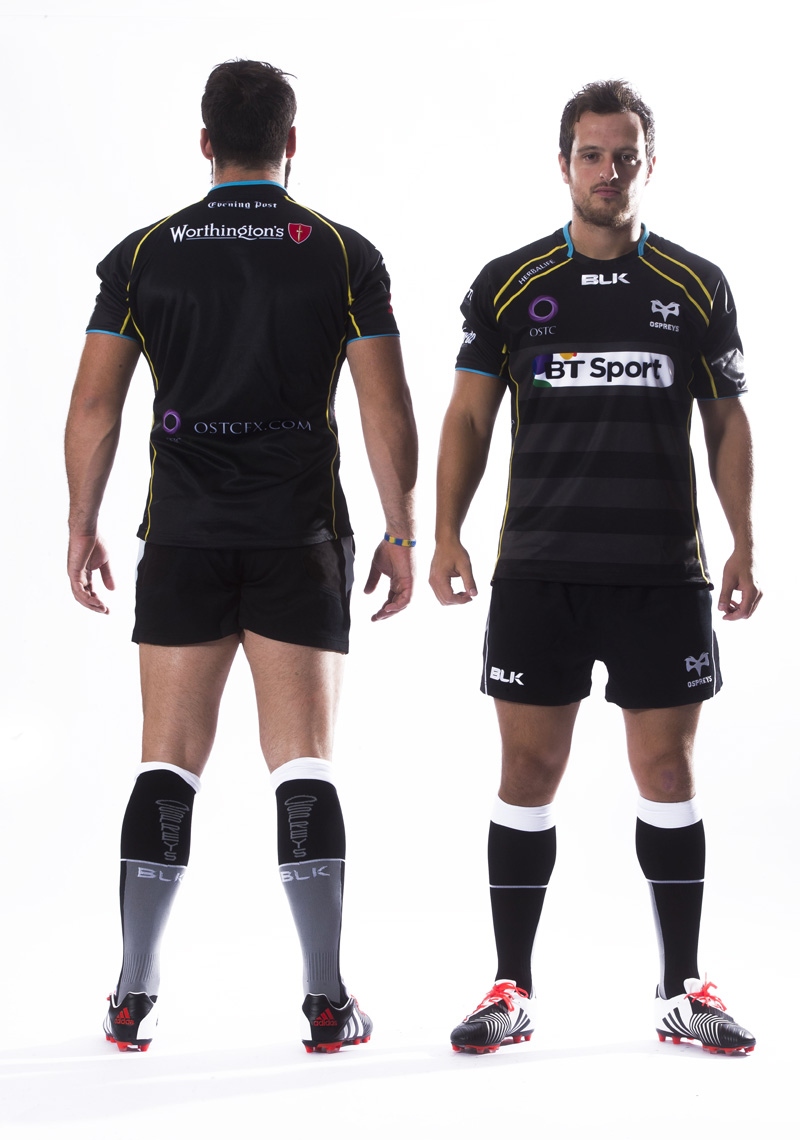 It will be worn in action for the first time at the opening Pool 5 game against Benetton Treviso at the Liberty Stadium on Sunday 19th October (1.00pm KO).

The logo of commercial partners, BT Sport, again features across the front of the jersey, which is the first in the region’s history created specifically for European action.

“We’ve had an incredible reaction to the new BLK merchandise for 2014/15, with sales of replica jerseys up year on year to date. This new European jersey will, I believe, really create a stir and prove hugely popular with players and supporters alike.

“It’s taking our tradition and history and given it a fresh look that will look as good in the bar post-match as it will do on the field, so we’re expecting it fly off the shelves as the team go into European battle over the next few weeks.”

Since 2006 the Ospreys jersey has become a sales phenomenon, proving to be the second biggest selling club or regional rugby jersey in UK and Ireland in every season.

An independent report compiled in 2013 by Running Rugby, a respected website aimed at ‘decision makers in league and union’ illustrated how the Ospreys continue to outsell their rivals, with sales running at double the number of the other three Welsh regions combined.

The new Ospreys European jersey is available to buy now, instore at the Ospreys Club Shop and online at shop.ospreysrugby.com, with adult jerseys priced at £54.99, junior sizes £44.99.