The Ospreys today unveiled a bold new look for Europe, as they took the wraps of a stunning new jersey that will be worn throughout the region’s Champions Cup campaign.

Once again produced by global kit suppliers BLK, the new jersey combines the traditional Ospreys black core, combined with a vibrant neon green trim and a striking Ospreys ‘mask’ logo as a centre piece, emblazoned across the body of the shirt to give it a modern look. 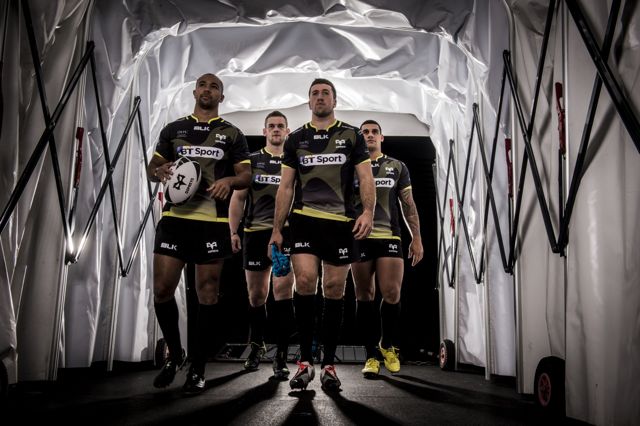 The shirt will be publicly unveiled for the first time at next week’s European Rugby Champions Cup launch event in London on Wednesday, where skipper Alun Wyn Jones will represent the Ospreys. It will then be worn by the team for the first time when they kick-off their Pool 2 campaign at the Liberty Stadium against Exeter Chiefs on Sunday 15th November, 5.15pm KO.

Available to pre-order now, the Ospreys European jersey will arrive instore at the Liberty Stadium club shop next week, when all pre-orders will be dispatched.

“It’s been well documented how the Ospreys jersey has become such a huge sales phenomenon and since BLK came on board in 2014 they have brought a fresh, dynamic approach to shirt design which has really struck a chord with players and supporters alike. They’ve really taken the Ospreys shirt onto another level.

“Our 2015/16 home and away shirts have proven incredibly popular, with sales reflecting that accordingly, and we’re expecting a similar reaction to the new European version which is unlike any Ospreys shirt that has gone before it.”

You can pre-order the new Ospreys European jersey now at shop.ospreysrugby.com and it will be instore at the Ospreys Club Shop next week.