Pupils from Special Teaching Facilities (STF) and Special Educational Units (SEU) across Swansea took part in a tag rugby event this week which was attended by Ospreys players.

The event, held at Playfootball in the city, was run in conjunction between the City and County of Swansea's Active Young People Department, the Ospreys and the WRU. Pupils from the STF and SEU from Ysgol Penybryn and Morriston, Birchgrove, Dylan Thomas and Bishop Gore Comprehensives took part in the special rugby activities on offer.

Ospreys players Ryan Jones, Tom Smith and Dmitri Arhip were also on hand to join in the fun and help the youngsters learn some new skills. The players also took part in a modified game of rugby with pupils from Morriston Comprehensive School where Tom Smith's team was victorious over Ryan Jones'.

After the activities the players presented pupils from the five schools with a special Ospreys and WRU goody bag before signing autographs and posing for photographs with the children - some of the teachers!

"The children have been absolutely fantastic today, they have really enjoyed all the activities and we really appreciate the help from the Gorseinon College students, the WRU and the Ospreys in putting on such a great event.”

"Tom, Dmitri and myself have had a brilliant time at today's tag rugby and meeting all the children taking part. It's fantastic to see so many youngsters getting involved in rugby and it's been especially great to see the innovative approach, with modified rugby games to make sure that everyone is included. It was a pleasure to take part in one today.” 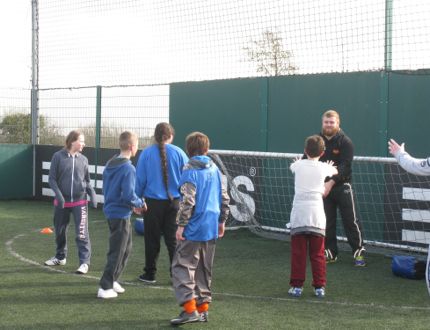