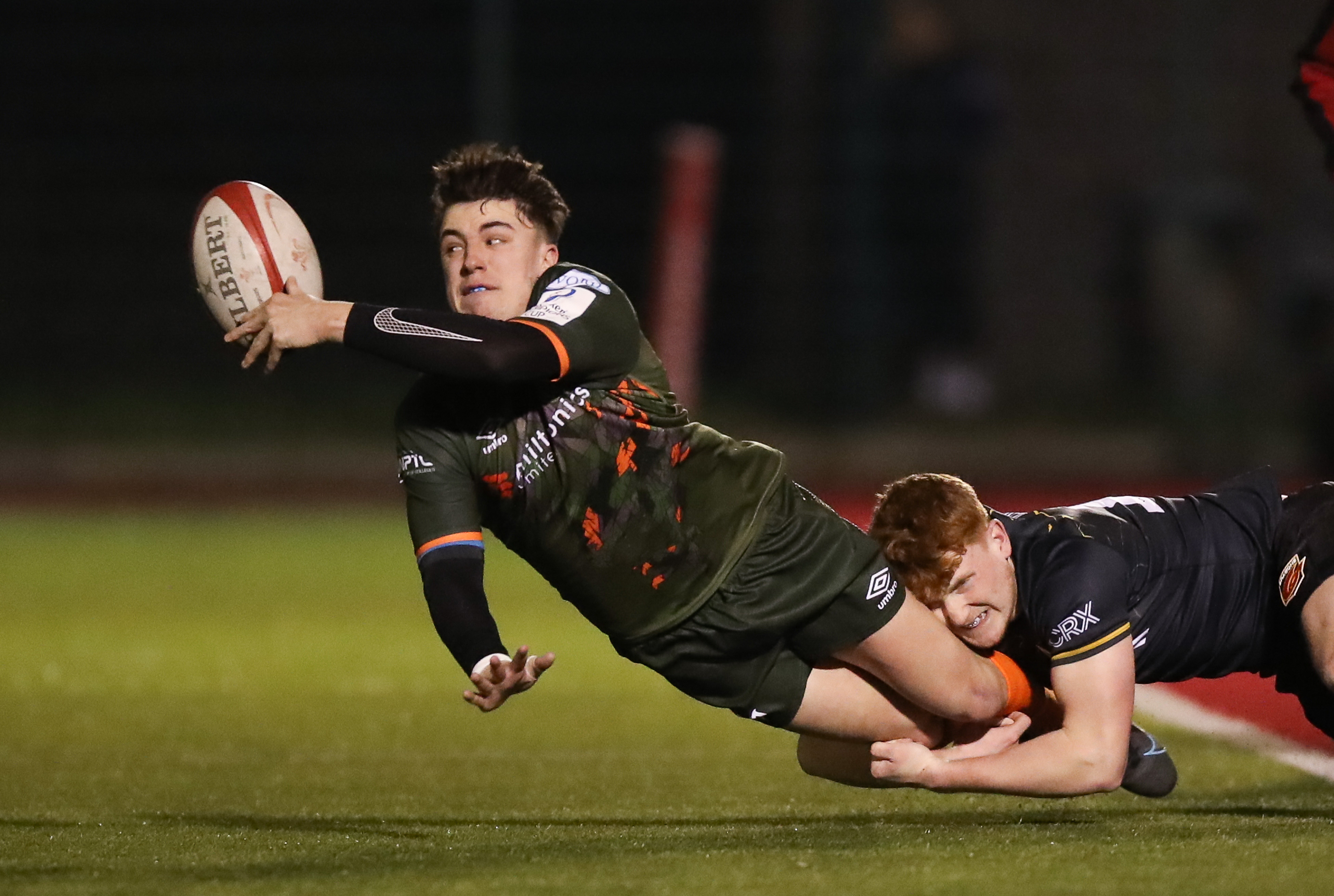 A first half hat-trick from winger Llien Morgan and 13 points from the boot of Rhys Harris ensured Ospreys earned their first win of the U18s block in tricky conditions at the Talbot Athletic Ground.

Ospreys started the game brightly, showing intent with the ball in hand. RGC were penalised for offside inside their own 22, Rhys Harris kicked the penalty to put his side ahead.

From the resulting kick off, they decided to run the ball from their own 22. Starting with Harris, the backs put the ball through the hands, number 8 Finn Evans broke clear and passed to Morgan who rounded the RGC full back to score. Harris converted.

With the advantage of a strong wind behind them in the first half, Ospreys were content running the ball from their own 22. This time, centre Kian Abraham broke through the RGC line, he passed to captain Cori Lewis Jenkins who kicked through for Rhodri Lewis to collect and he stepped two defenders to score. Harris missed the conversion.

The forwards joined in on the scoring after going through the phases patiently. Flanker Dai Francis powered over from close range, Harris converted.

Harris controlled the game throughout, using the wind to his advantage in the opening period. He passed to full-back Isaac Morgan who ran a great angle to break the line, Llien Morgan was in support and gathered the ball to score his second. Harris converted to put his side 29-0 in front.

Francis scored his second of the match after strong work from the forwards again. Scrum half Lewis had quick ball and Francis dived over under the posts. Harris converted.

Llien Morgan grabbed his hat-trick in the final minute of the half, the backs used quick ball to their advantage once again. The ball went through several players before it found Llien Morgan out wide who used his pace to get over the line. Harris pushed his conversion wide.

With the wind behind them in the second half, RGC gained a foothold in the game. However, the wet weather kicked in and turned the contest into more of a forwards orientated game.

The opening 15 minutes of the second period was played in and around the Ospreys 22, replacement Finley Jones nearly touched down from a kick through and the forwards were also denied short of the line by a stubborn Ospreys defence.

RGC’s pressure finally paid off when a quick tap from second row Owain Evans caught the Ospreys defence out and he scored under the sticks. Gruffudd Ap Ieuan converted.

Ospreys responded quickly, after a smart low kick through from Harris was fumbled by RGC, allowing Abraham to regain possession. Replacement tighthead Eli Cowan was rewarded with a try from short range. Harris converted.

RGC had the final score of the afternoon, their forwards who battled well throughout were rewarded with a try through Evran Ozbilen. Ap Ieuan converted.

Ospreys will be delighted with their first half performance which set them on their way to the first win of the U18’s block. They’re next in action away to Scarlets in two weeks’ time.