Ospreys “have to deliver” in last five games

Sam Parry has welcomed back the Ospreys’ international contingent ahead of Saturday’s game against the Scarlets and has backed the squad to finish the PRO12 campaign in style over the coming weeks.

The Scarlets game at the Liberty Stadium this Saturday (3pm) kicks-off a busy run of five games, including three Welsh derbies, between now and the end of the season, with the Ospreys targeting five from five as they look to secure a top six finish to qualify for next season’s European Rugby Champions Cup.

After the Scarlets, the Ospreys travel east the following weekend to face the Dragons before welcoming Treviso to the Liberty on Friday 15th April (7.35pm). Judgement Day on Saturday 30th April sees Cardiff Blues provide the opposition at Principality Stadium. The season concludes with a home game, against Ulster, at 3pm on Saturday 7th May.

“It’s an incredibly important period for us now, these last five games, with a huge local derby against our biggest rivals to start with” said Parry.

“It’s good to get all the boys back together ahead of this game. We know that we have to go out and perform consistently now, to win each game if we want to finish in the top six.”

A tough Six Nations period saw the Ospreys play away to three Irish provinces, as well as home to Edinburgh and Glasgow, with mixed results (two wins, one draw and two defeats), but performances have been a huge step in the right direction, improving on the early season form during the Rugby World Cup. Parry continued: 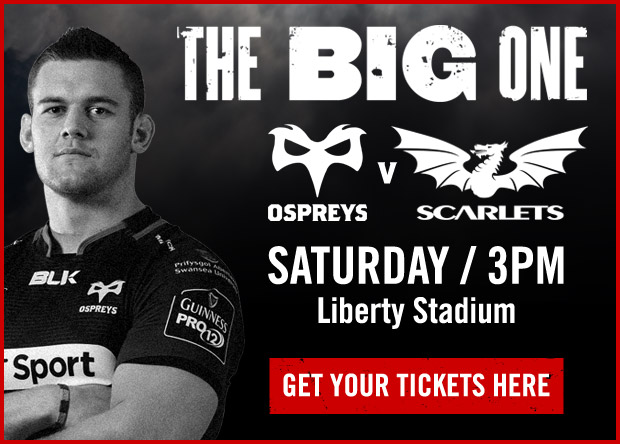 “The start of the season we didn’t quite fire, we were unlucky in a few games, and we found ourselves on the wrong end of a few results so were down the bottom of the table, somewhere we aren’t used to being.

“After the World Cup the international boys came back and raised the bar in terms of performance and standards, allowing us to put together a decent run, and, in fairness, the wider squad has looked to carry on those standards. They’ve taken everything on board, have that much more experience for a young group, and are better for it.

“We’ve been disappointed to lose the last two games, against Connacht and Leinster, but the performances have been good, as they were against Munster and Edinburgh before that. As a whole, we’ve definitely moved forward as a group during the Six Nations period.  We’ve shown that we can compete, the squad is getting stronger, and now that we have the Wales boys coming back in as well it’s going to be a tough week in training with everyone pushing hard to play against the Scarlets on Saturday.”

Even in defeat in back to back games on the road in Ireland in the last two PRO12 rounds, a youthful team averaging just 23 were unfortunate to come away with just one point instead of potentially picking up two crucial wins. Parry says that the Ospreys have to look forward now instead of reflecting on what might have been:

“They’re obviously tough places to go, among the hardest in European rugby, even when you are fully loaded. Everyone put their hands up in those games and I think certain boys in the squad really took their chances when they came their way, which is how it has to be. You are always on a learning curve and I think it’s fair to say the last couple of months have been a pretty big learning curve for us, learning what’s needed to go to these places and play.

“We have to look forward to this run of games now, not backwards at what’s been and gone. We can’t change that now. It’s five big games, they are vital for us in terms of rounding off this season and shaping next season, we want to be playing Champions Cup rugby so have to deliver in these five games.

“Every game is massive now, starting at the weekend, but we’ll have to focus on one at a time and make sure we do what we have to.”

Tickets for the BIG one, Ospreys v Scarlets, at the Liberty Stadium on Saturday 26th March, are on sale now at ospreysrugby.com/buytickets