Ospreys in the Community launched

Brand new, not for profit Foundation, set to make impact in the communities across the Ospreylian region.

Julie James AM, Deputy Minister for Skills and Technology, was at the Liberty Stadium on Thursday afternoon to help launch Ospreys in the Community, a brand new, not for profit Foundation that will work in close partnership with Ospreys Rugby. 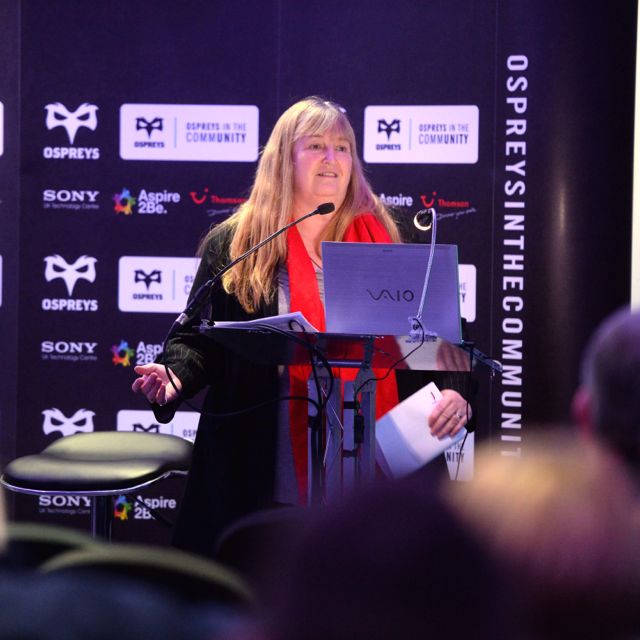 Julie James AM opens the launch of Ospreys in the Community

The Deputy Minister was joined at the launch by key political figures of all persuasions from from across the region as well as business, community, health and education leaders.

Also in attendance were pupils from Awel Y Mor and Cwm Glas schools, while Ospreys captain, Alun Wyn Jones, and his team-mates Scott Baldwin, Dan Lydiate and Justin Tipuric also gave their support to the Foundation.

Whilst sharing a strong relationship and forming a key part of the Ospreys’ long-term business strategy Ospreys in the Community will operate on an entirely independent basis to the professional rugby organisation.

Working in conjunction with commercial partners, public sector bodies and third sector agencies to generate financial support and resources, the aim of Ospreys in the Community is to create a vibrant and sustainable Foundation that utilises the undoubted power of the Ospreys brand, and players, in a positive fashion, to harness social good and make an impact in communities.

“I am delighted to launch Ospreys in the Community. I am sure that this programme, backed by a leading name in the world of rugby, will play an important role in boosting skills levels and, in turn, improve the prospects of people across the region. ”

It is envisaged that Ospreys in the Community will play an important part in improving many people’s lives irrespective of age, ability or gender, a wide range of strategic partnerships enabling the creation and activation of innovative programmes that will be contained within four Strategic Themes; Education, Health, Sport, and Inclusion. 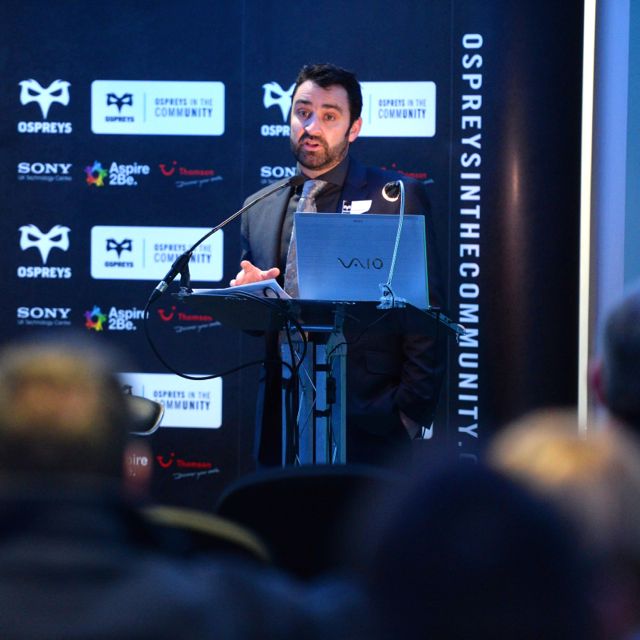 Andrew Hore addresses the audience on behalf of Ospreys Rugby

Chris Richards, Chair of Trustees, Ospreys in the Community, said:

“The launch of this Foundation is undoubtedly the one biggest single event that will impact on Ospreys Rugby in 2015 and, for that matter, any year. The business has spoken for many years about being a community-focused organisation, at the heart of everyday life across the region. Well, Ospreys in the Community will enable us to live that vision, every single day.

“Over the next three years Ospreys in the Community is targeting engagement with over 20,000 people in their communities per year, becoming an established organisation that provides sustainable, inclusive and enjoyable programmes for all, that have a positive impact on the lives of Ospreylians young and old, male or female.”

The Board of Trustees of Ospreys in the Community is made up of Andrew Davies, Chairman ABMU Health Board, Karl Napieralla, Head of Local Government Intervention at Welsh Assembly Government, Roger Blyth Chairman of Osprey Rugby, Chris Richards Vice Chairman of Ospreys Rugby and Andrew Hore, CEO, Ospreys Rugby. Further expertise will be added to the board as Ospreys in the Community grows.

As Foundation Manager, Paul Whapham will drive the day-to-day activity and growth of Ospreys in the Community.

Having previously worked for City and County of Swansea, prior to joining Ospreys in the Community he was Community Development Manager with Halo Leisure, a registered charity and social enterprise responsible for running sports and leisure centres across Bridgend.

With a Masters in Obesity, Physical Activity and Health, Whapham previously served as Development Director for Welsh Triathlon, and he believes passionately in using sport to deliver change in the community, empowering people of all ages and from all backgrounds to make positive life choices. 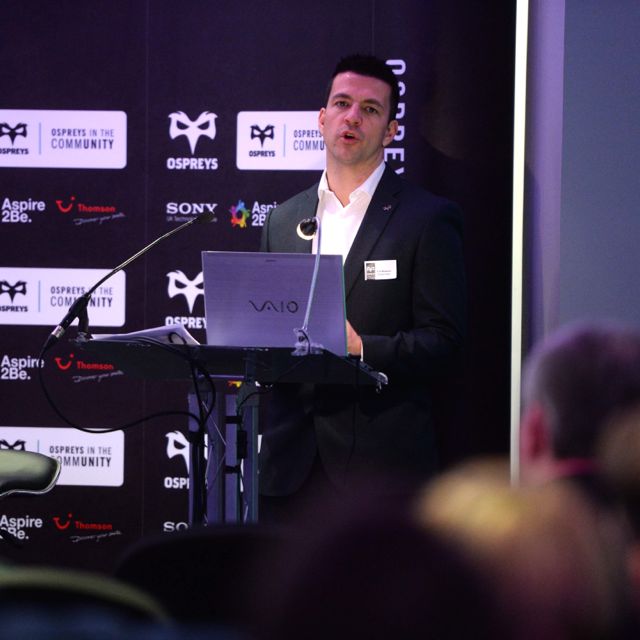 Paul Whapham discusses the plans for Ospreys in the Community

“Ospreys in the Community can play an important part in improving many people’s lives irrespective of age, ability or gender” said Whapham.

“It’s not just about rugby; rather, it is about using the Ospreys name and profile as a force for change in many different ways. The purpose of Ospreys in the Community is to have a positive effect on changing people’s attitudes to education, health and leading a healthier lifestyle.

“We will achieve that through developing and delivering programmes that encourage communities to become more resilient. Supporting key Government agendas and initiatives, we aim to make a difference within communities by empowering people, and improving skills such as self-confidence, leadership and communication.

“We can only deliver on those aims if we are true to our word, working with public, private and third sector organisations to become a self sufficient and financially independent Foundation, really making a positive difference to people across Ospreylia.” 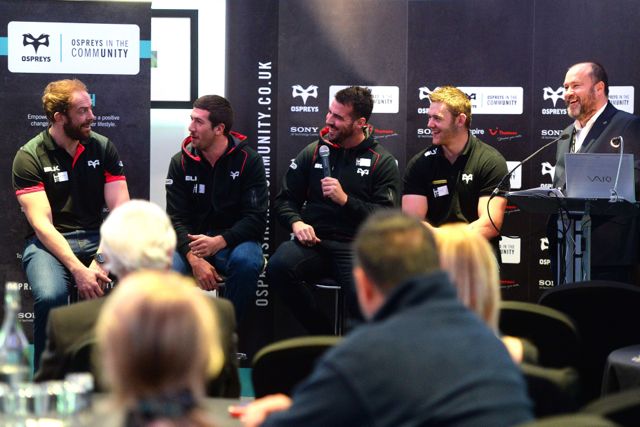 Players take part in a Q&A about the Foundation

The launch event was also used to showcase the first development for Ospreys in the Community, the overhaul and relaunch of the successful Ospreys Schools Programme, a groundbreaking initiative first launched three years ago which has already impacted on almost 10,000 primary schoolchildren.

The specially designed educational programme has been developed with education departments at the three unitary authorities in the region to ensure it satisfies National Curriculum objectives and assists in the development of key skills. 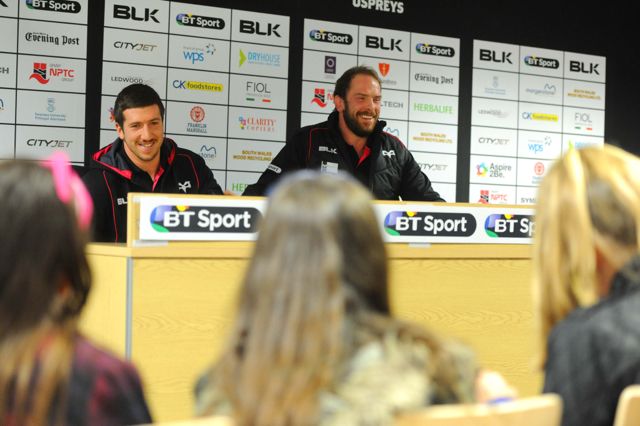 Thanks to the involvement of Aspire2Be, one of the UKs leading education technology companies who are based in Ospreylia, delivery of the Schools Programme into primary schools across the region has been transformed, with the new core area of digital competence at its heart

Aspire2Be’s expertise is in delivering national and international award winning education programmes based around digital competencies, numeracy and literacy standards, and they have developed an interactive application which schools will be able to use as part of their teaching and learning and to enhance the match day experience. It can also be used to activate the cashback for schools ticketing scheme by purchasing tickets for Ospreys matches.

"We are extremely proud to have been asked by Ospreys in the Community to be a central part of this exciting programme. We have re-engineered the offering to schools, using the six key areas of the new curriculum as modules and added a core digital competency element to the whole programme. A programme application has also been designed with in built iBeacon technology ensuring that the Ospreys have become the first region to adopt such a curriculum rich digital schools programme."

In addition, Sony UK Technology Centre in Pencoed, a long-term supporter of the previous schools programme have reaffirmed their commitment to the newly enhanced version, while planning for an ‘older’ version to be rolled out to comprehensive schools in the near future.

“Ospreys in the Community is going to make a real and tangible difference to people’s lives. This launch is just the start of something that everybody who cares about the Ospreys, or the local communities across the region, should be extremely excited about."