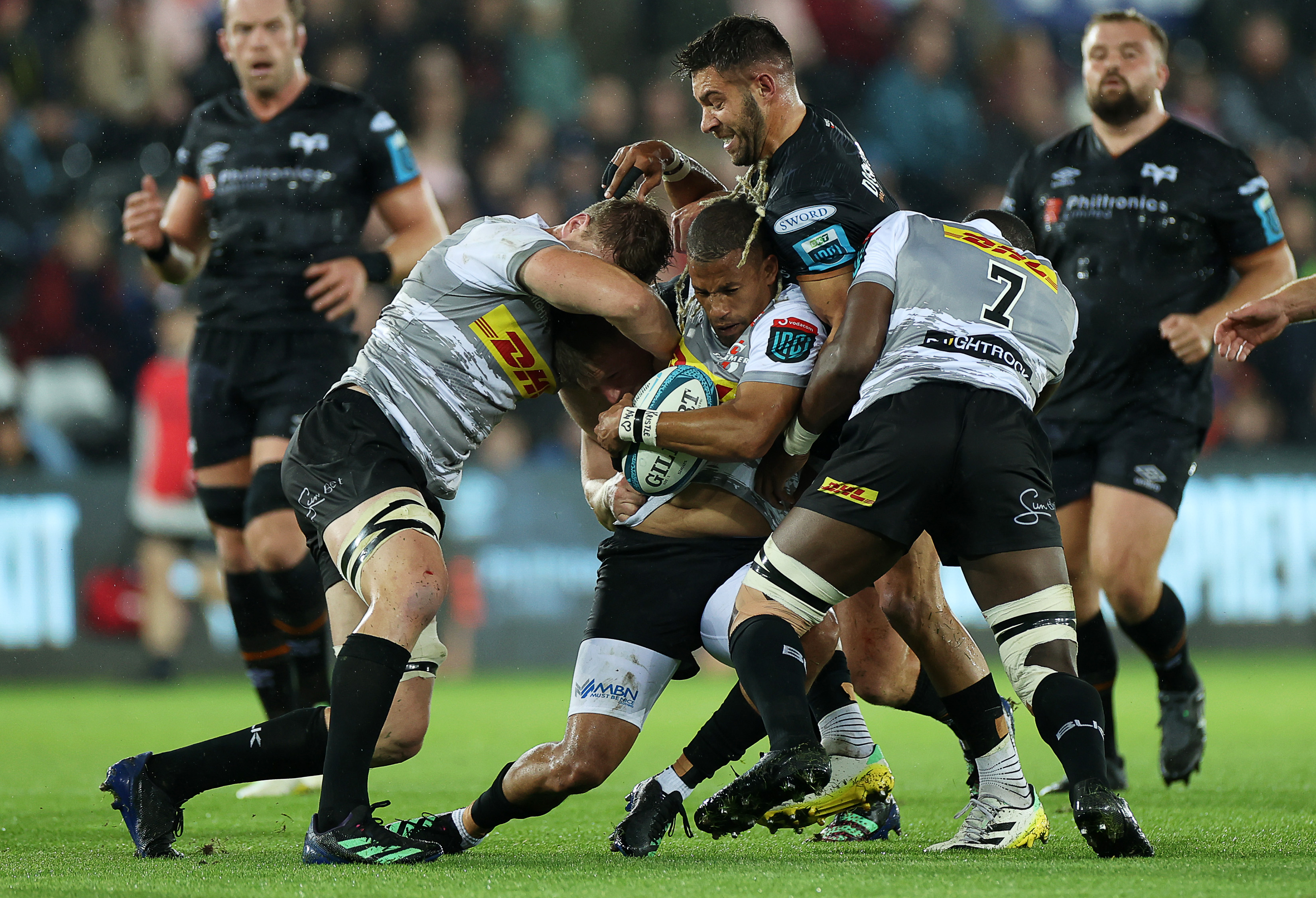 Ospreys clinched a late but well-deserved draw with reigning URC champions Stormers in tough conditions at the Swansea.com Stadium.

Most of the opening exchanges were played inside Ospreys territory with the Stormers imposing their physicality around the ruck area.

The visitors kicked to the corner after winning a turnover penalty. They set up their driving maul, however the Ospreys defended the play well before the Stormers tried a kick through that was cleared brilliantly by Rhys Webb.

However, it was the visitors who opened the scoring through a penalty from Manie Libbok after the South Africans won a scrum penalty against the feed.

The hosts responded well later in the half, where their scrum started to get on top of the Stormers. Having kicked to the corner the home side came metres short of the visitors try line, but they spilled possession of the ball when they tried to go wide.

From the resulting turnover the away side were awarded a penalty just inside their own half which Libbok expertly slotted between the sticks to extend his sides lead.

Ospreys’ scrum was on top once again, they were rewarded with another penalty, which Stephen Myler calmly kicked over the posts to put them on the scoreboard five minutes before the break.

The hosts were agonisingly close to scoring the first try of the game, which came from a clever lineout move on the halfway line. Michael Collins made a break down the blindside before offloading to George North. The ball went across the park, with an opportunity on the opposite wing, however, Jac Morgan’s final pass to Keelan Giles didn’t stick.

Ospreys started the second period stronger than the first and seemed to match the physicality of the Stormers. Myler kicked his second three-pointer of the match to level the scores after North won his side a penalty at the breakdown.

The visitors scored the opening try of the match in the 55th minute after winger Leolin Zas spotted a gap in the middle of the field before breaking into Ospreys territory and passing to scrum half Paul De Wet who dived over the try line. Libbock converted.

Ospreys battled hard throughout and earned themselves attacking opportunities in Stormers territory, however, the conditions played a part with handling errors in crucial positions.

With 15 minutes left on the clock the hosts were awarded a penalty from a scrum 40 metres out. Myler stepped up once again to kick the three points to close the gap.

Minutes later Libbock kicked his third penalty of the match to leave seven points between the sides entering the final ten minutes.

The hosts won a penalty on the halfway line which they kicked to just inside the Stormers 22. Their driving maul was on the front foot before being halted illegally, giving them another opportunity to put the ball in the corner.

From the resulting lineout the pack forced their way over the try line with the driving maul, replacement Scott Baldwin was the man with the score. Myler converted superbly from the touchline to tie the scores.

With 30 seconds left on the clock the visitors were 25 metres out. Manie Libbock attempted to seal the game with a drop kick, however he pushed it just wide.

The hosts managed to win the ball in the middle of the park before spilling it which brought an end to a frantic game in tough conditions in Swansea.

Head coach Toby Booth commented, “I am disappointed for the boys, they gave a really good account of themselves. In our eyes we edged the contest, we probably could’ve got a little bit more out of it. We were guilty of not being clinical enough, but the effort and commitment in those tough conditions was very pleasing.”

On Stephen Myler’s influence he said, “You don’t get many better, he was my first signing at the club, and many would argue he’s been my best. He’s a consummate professional and is a very reliable person to have out there, especially in these conditions.”