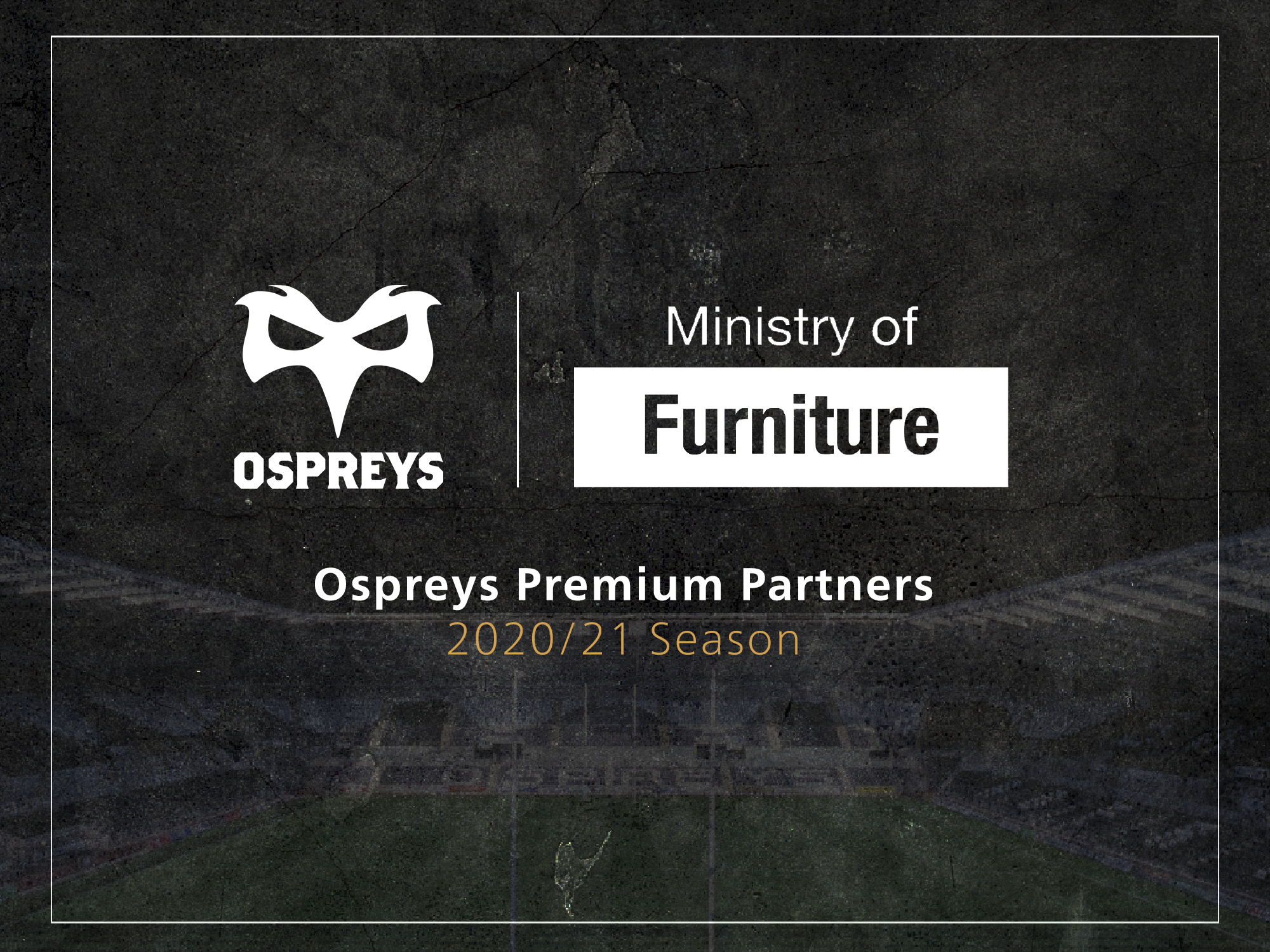 The Ospreys are proud to unveil an exciting new partnership with Ministry of Furniture as a kit sponsor and Premium Partner for the new 2020/21 season.

Ministry of Furniture emerged from the closure of the Port Talbot Remploy factory in 2013. The Ministry team have established a reputation for designing and creating inspirational interiors for the smallest or largest workplaces. Ministry of Furniture’s brand will appear on the sleeve of the new Ospreys kit.

From the company’s base at Baglan Energy Park, the Ministry of Furniture team adapted quickly to the challenges posed by the coronavirus pandemic and have designed and produced a range of protective solutions screens for workplaces using the existing machinery, skills and materials.

These products have been adapted for use within NHS facilities, public reception areas, shops, bars, restaurants, schools and offices. The technology has played a key role in helping many businesses reopen safely as lockdown has eased.

Ministry of Furniture also recycles furniture at its Ystalyfera factory, leading the way in developing environmentally friendly solutions and upcycling furniture. Aligned with this ethos, it also takes a keen interest in player welfare after rugby and has employed former Osprey player Rob McCusker.

Graham Hirst, Managing Director of Ministry of Furniture.
“It was a balance of commercial and emotional decisions to work with Ospreys rugby.  It is what we thought it would be and it hasn’t disappointed."

"Around the commercial business aspect, which is what it’s all about, we have opened up some new avenues in our own backyard of South Wales, particularly in the Ospreys region, which was fundamental to our strategy.

“We wanted to get our branding out there around Ministry of Furniture and that has been successful. We have worked with partners around the Ospreys, such as Keytree, and we have done some lovely projects with them. We have met people we knew of, but have now had those introductions to be able to chat and explain what we can offer them.”

“Ministry of Furniture is a great example of a company which believes in its role in the Ospreys community. Graham and his team are big supporters of the Ospreys in the Community foundation, helping youngsters preparing for work or further education.

“When I spoke to Graham about Llandarcy Academy of Sport being turned into a field hospital, he offered to get involved with what was an important project for the whole of our community and a vital one for NHS Wales. His team produced protective polycarbonate screens for every bay of every ward so nurses and carers could see bay to bay in the case of an emergency at the field hospital in Llandarcy. Those kinds of relationships and partnerships are what being part of the Ospreys community is all about.”