It was a good afternoon’s work for the Ospreys as they got their European Rugby Champions Cup campaign off to a flying start with a bonus point win over Treviso at the Liberty.

First half tries from Jeff Hassler and Rhys Webb put the Ospreys in the driving seat and then, after the break, a Dan Baker score was sandwiched by a brace from Dan Evans as they drove home their dominance. Dan Biggar kicked a further 17 as the Ospreys overcame the first challenge of the new competition with something to spare.
Ahead of kick-off everybody at the Ospreys was saddened by the news that Scarlets and Regional Rugby Wales stalwart, Stuart Gallacher, had sadly passed away overnight and an impeccably observed minute’s silence was observed before the start of the game. 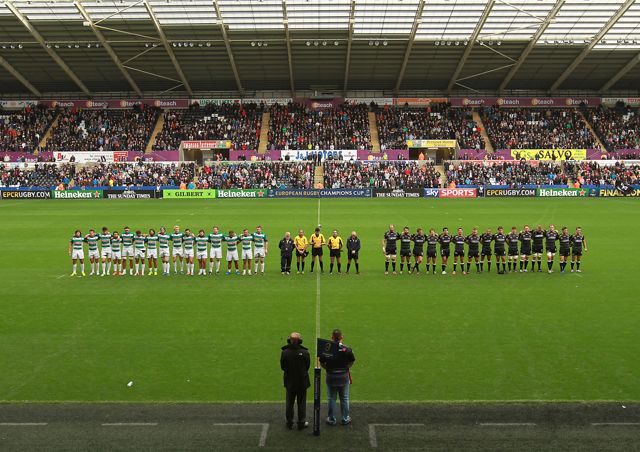 Early on, a Treviso overthrow at their line-out inside the Ospreys 22 gave the hosts an unexpected platform to attack from, and they didn’t waste the opportunity, sweeping upfield into the opposition 22. When the Italians offended on the floor, Biggar was handed a straightforward shot at goal to give his team the lead with just five minutes played.
Just a couple of minutes later, good pressure from the Ospreys with Rhys Webb half charging down Alberto Lucchese’s kick and Eli Walker chasing his own dink through eventually led to Biggar doubling the lead after a Treviso player was penalised for not rolling away.
A Treviso offside then allowed Biggar a third sight of goal and again his radar was working perfectly as the Ospreys went 9-0 up in the 14th minute.
The hosts were well on top but hadn’t looked like cutting the Treviso defence open until just past the midway point of the half when Hassler crossed for the first try of the afternoon. With a penalty advantage in their favour following a huge scrum on the Treviso 10m line, they were able to pour forward and Alun Wyn Jones was hauled down just short of the line. It was recycled swiftly and there was no stopping the Canadian winger from close range. Biggar’s conversion stretched the lead to 16 points.
Treviso rallied and put together some positive phases of rugby only for Ludo Nitoglia to be called back by the ref as he raced for the line, Joe Carlisle’s pass inching forward as his winger cut infield at a great angle to take the ball.
The visitors were reduced to 14 on 33 minutes when the officials finally run out of patience with the Italian team’s constant offending, Marco Fuser shown yellow for illegally bringing down an ominous looking rolling maul. They were made to pay the price immediately, as when Dan Baker was stopped inches short after the Ospreys, understandably, went for the maul again, Webb was alert, sniffing around the fringes, and he reacted first to dab the ball down for the second try. Again, Biggar made no mistake with the conversion.
HALF-TIME: OSPREYS 23 BENETTON TREVISO 0
The opening minutes of the second half saw the Ospreys taking control right from the off, winning a series of penalties deep inside Treviso territory and no sooner had the visitors been restored to 15, they were a man short once again, Salesi Manu sent to the sin-bin for a side entry.
For the fourth time of the half, the Ospreys went to the corner and although they failed to build any momentum with the maul on this occasion, with defenders sucked in they moved it wide for the backs. Biggar was stopped just short but full back Evans managed to get over the line and ball to ground despite the Italian’s best efforts to hold him up, the score confirmed by the TMO. Biggar’s metronomic boot again adding the extras.
The bonus point try came in the 53rd minute, the Ospreys running back a loose clearance from halfway, Eli Walker, Josh Matavesi, Hassler and Biggar all carrying well before Baker took the ball some 10m out and brushed off some ineffective tackling to go over for the fourth touchdown of the afternoon.
Another successful conversion from the ever-reliable Biggar took the scoreboard to 37-0 with almost half an hour still to go.
Things had being going perfectly for the Ospreys, but they suffered a setback when, after a lengthy stoppage for treatment, Baker had to be stretchered off as a precautionary measure after suffering a neck injury.
The long delay, and the coaches emptying the replacements bench, failed to halt the Ospreys momentum and they went further ahead just after the hour mark, Evans grabbing his second try of the afternoon to round off a flowing counter attack that began inside the Ospreys’ 22, receiving a lovely floated pass off Webb to go over in the corner. After kicking seven from seven, Biggar pulled the conversion short, his first miss of the afternoon.
The Ospreys looked to add to their lead, Martin Roberts seeing his score rubbed off after Joe Bearman was ruled to have obstructed a defender off the ball, while Justin Tipuric was called back as he went for the line for a certain try after a forward pass in the build-up.
With Eli Walker off the field with a tight calf in the last five minutes and the Ospreys having used all their replacements, they played out the closing stages a man short. The final word went to Treviso, breaking from their own 22 following an Ospreys knock-on as they pressed for the line, and Nitoglia carried from his own 10m line, outpacing the covering Tipuric to score, Carlisle converting.