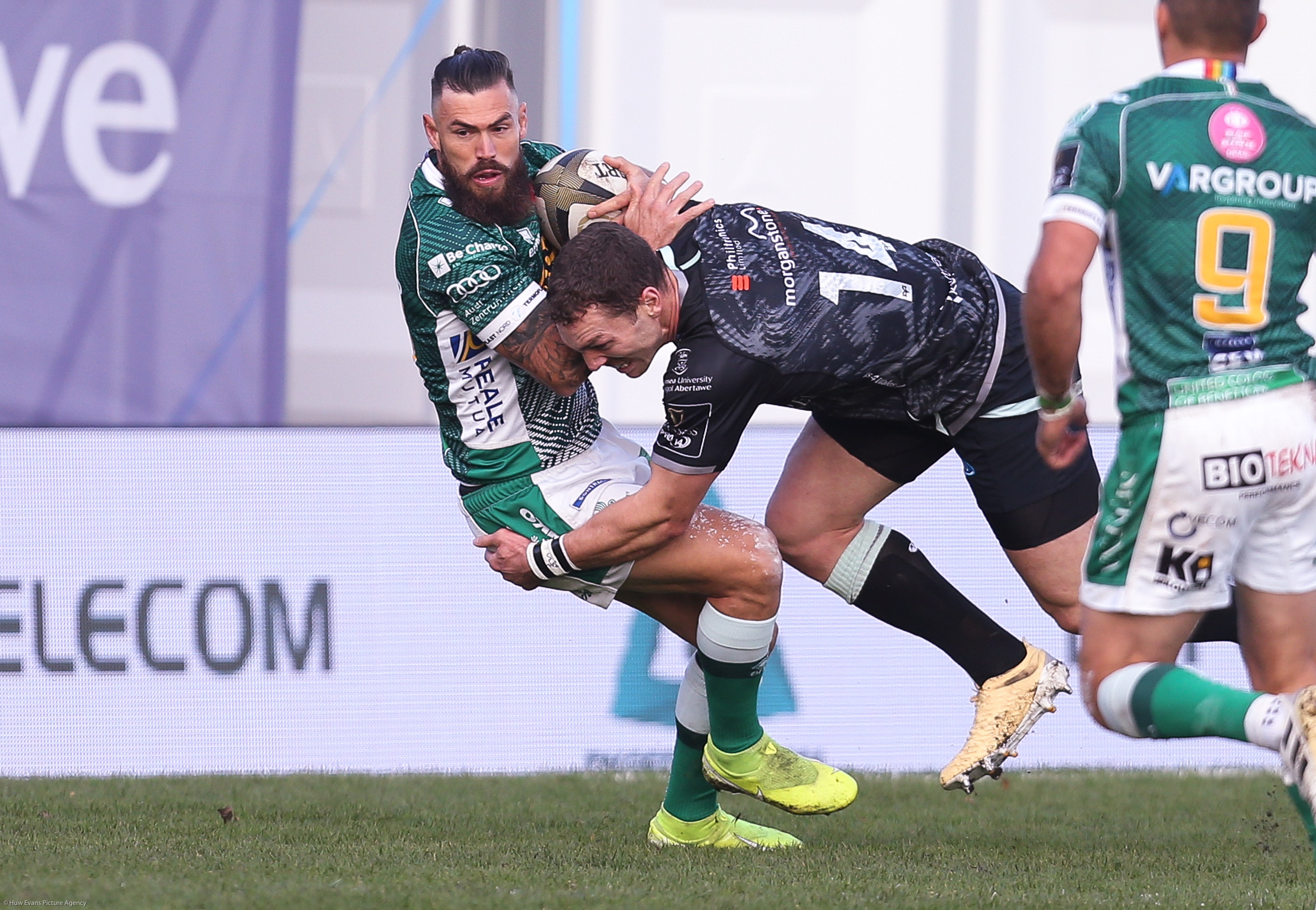 Ospreys earned a perfect start to the game through hooker Ifan Phillips, who scored a try from the back of an advancing maul. Benetton’s hooker Epalhame Faiva got the ball over the line minutes later, however, and with two successful conversion from the respective kickers, the game was level for most of the half. The deadlock was broken on the cusp of half-time through the experienced boot of Ospreys outside half Stephen Myler, slotting a long-range penalty to steal the lead.

The second half started brightly for the visitors, with Benetton hooker Faiva getting a brace of tries to notch up a hattrick and outside half Keatley adding a penalty goal. Ospreys number eight, Gareth Evans, was shown a red card for a reckless entry into the ruck, forcing the Ospreys to play the final half an hour of the game with only 14 men.

Dan Lydiate, Ospreys captain
"A lot of effort has gone on behind the scenes, but the results haven’t gone our way recently. Today, it wasn’t an epic game, but a win is a win.”

However, the Ospreys’ revival began with just ten minutes remaining, as Shaun Venter finished off a wonderful try bring the hosts back within a single score. Something was definitely brewing in the final five minutes, as the 14-man Ospreys team piled on the pressure; Benetton conceding a series of penalties in the panic. A final effort from the yielded the desired result, with Ospreys replacement hooker Dewi Lake clinging on to the maul that ploughed through the Benetton pack to score the fateful try. Outside half Myler converted the score to secure a last-gasp victory for the hosts.

“I’m pleased to get a result and it’s nice to get back to winning ways. The boys dug in and we got the result in the end. It’s massive for us. A lot of effort has gone on behind the scenes, but the results haven’t gone our way recently. Today, it wasn’t an epic game, but a win is a win.” – Dan Lydiate, Ospreys captain.

The hosts got off to an explosive start through Ospreys winger George North, whose first touch of the season for his region an influential one. The big winger broke the line from a set move and swallowed up the ground as he steamed towards the try line. Ospreys centre Keiran Williams was in support, but the final pass was deliberately knocked down by Benetton fullback Jayden Hayward. The Italian visitors went down to 14 men and would be asked to defend their line after just two minutes following a kick to the corner from Ospreys outside half, Stephen Myler.

Young hooker Ifan Phillips wasted no time, throwing the ball into the line and getting it back at the rear of the maul. Benetton had no answer to the drive and hooker Phillips got over the line with the help of his pack. Outside half Myler added to his impressive kicking stats with a successful conversion and giving his team an early 7-0 lead. A great start for the boys in black.

It didn’t take long for Benetton to respond, however, and after some patient and laborious work from the forwards Benetton hooker Epalhame Faiva burrowed his way through the bodies to plant the ball on the try line. Outside half Ian Keatley levelled the score with the conversion; game on in St. Helen’s!

Ospreys enjoyed a long period of possession inside Benetton territory as the clock ticked towards the 20th minute, but the visitors’ defence held firm and two back to back penalties at the breakdown relieved the pressure.

A lengthy run, sparked by Benetton’s Hayward, saw the green and white lions gain ground deep into Ospreys’ 22, but a last ditch tackle from winger North forced an error and there’d be an opportunity to clear the lines for the hosts.

Benetton again concede a penalty at the breakdown for not releasing the tackler. The clock neared the 40-minute mark as outside half Myler lined up a shot at goal from over 40m and sent the ball sailing between the posts, bagging a vital three points for his side and nudging the Ospreys into a 10-7 lead at half-time.

If the opening of the first half was a perfect one for the hosts, then the opening of the second half was anything but. Ospreys blindside flanker Will Griffiths was shown a yellow card for collapsing the maul, and Benetton scored a try from a second maul moments later. It was Benetton hooker Faiva who claimed the try, his second of the game. Keatley was unable to convert the score and Ospreys found themselves two points adrift after five minutes of the second half played.

Mat Protheroe was caught in possession in the shadow of his own posts, isolated, and the Benetton forwards secured a penalty which Keatley easily converted from the right in front of the sticks.

Ospreys number eight Gareth Evans is deemed to have joined the ruck recklessly, and a clash of heads means the big back rower was  shown a red card, and the Ospreys would be down to 14 men for the remainder of the game.

Benetton hooker Faiva claimed his hattrick after some confusion at the breakdown short of the line, but the try stood and Ospreys had a 12-point deficit to overcome with 20 minutes left to play.

The visitors looked like they were about to break out of their own half, but a cover tackle from Ospreys replacement scrumhalf Shaun Venter dislodged the ball, and fullback Protheroe launched a counter-attack. Winger Morgan made a dash down the wing, the pass to centre Williams beating the man, and a final inside ball to Venter secured a much needed try with under ten minutes left to play. Outside half Myler added the extras and Ospreys cut the deficit to just five points.

Ospreys won a penalty on half way, and Myler puts the ball just inside Benetton’s 22 for a late charge at the line. Benetton conceded a series of penalties in their 22, and prop Filipp Alongi was shown a yellow card. A period of sustained pressure from the Ospreys turned the screw on the green and white lions, with players like Keiran Williams, Rhodri Jones, Will Griffiths, Shaun Venter and George North making telling carries, gaining vital ground with each carry.

A penalty with minutes to go gave Ospreys a last chance in the corner. Ospreys replacement hooker Dewi Lake’s throw was accurate in the set piece, and the regathered the ball at the back of the maul. In a similar try to the first, the maul surged forward with a sense of inevitability. Hooker Lake grounded the ball over the line, and Myler’s conversion took the Ospreys into the lead with very little time remaining.

A final carry from centre Williams got the Ospreys out of their 22, and Myler’s last action of the game was to hoof the ball from the field and end the game as victors.