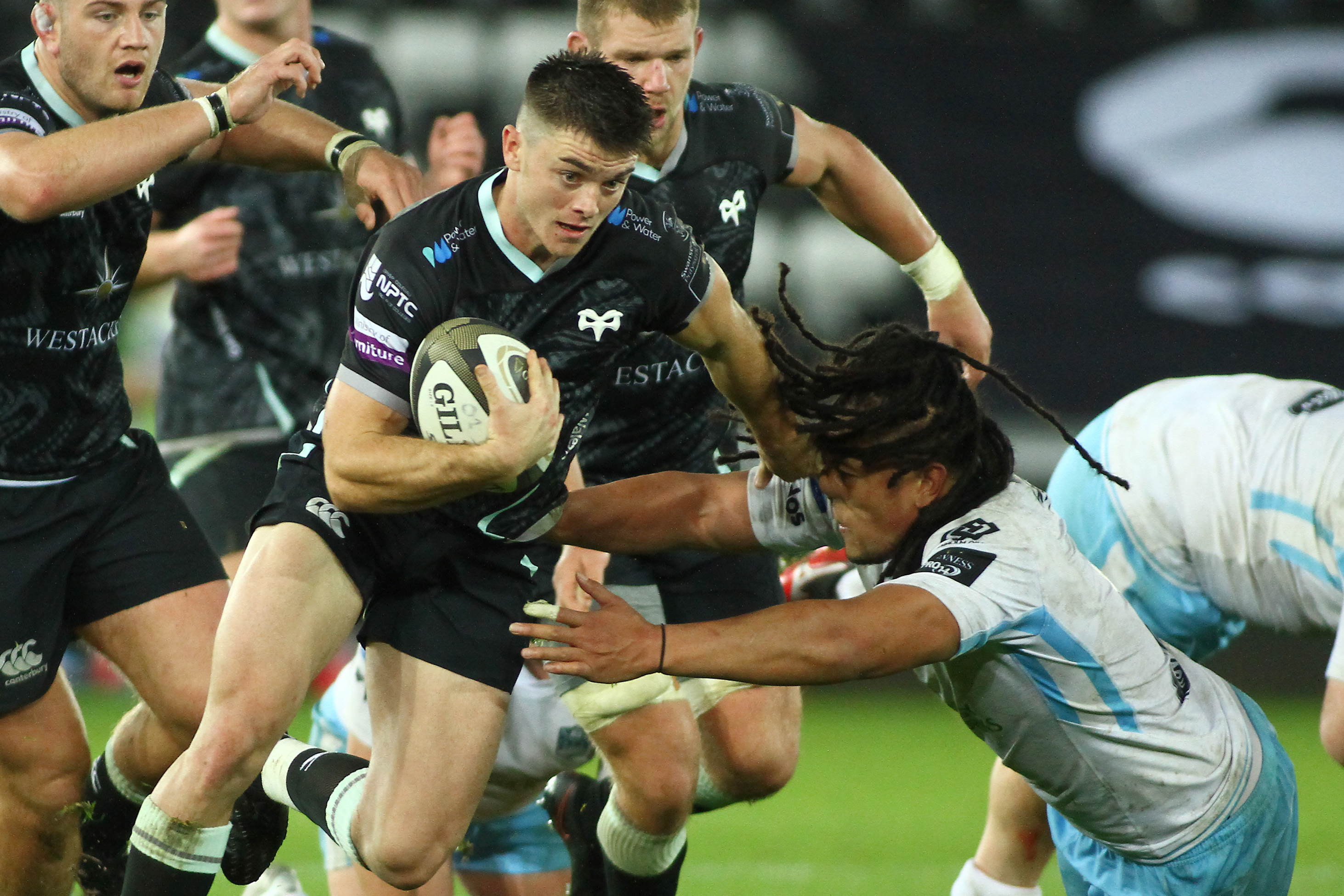 It was another wet and blustery night in Swansea as Ospreys welcomed Glasgow Warriors to the Liberty for Round 3 of the Guinness PRO14. Ospreys suffered a defeat at the hands of Ulster in the previous round, while the Scotstoun outfit claimed an impressive victory over the Scarlets. Both sides were missing players through international duty, so it was an opportunity for the homegrown youngsters to step up and make a name for themselves.

Ospreys centre Scott Williams and back rower James King made welcome returns into the Ospreys XV, both having battled with injuries last season.

It was a breathless opening ten minutes, as Glasgow Warriors’ fullback Huw Jones crossed for a try after four minutes, rebutted immediately by the boot of Ospreys outside half Stephen Myler. Ospreys squandered two opportunities to take the lead before the visitors extended their own lead through hooker George Turner, scoring from the back of a driving maul.

However, the tide slowly but clearly turned by the end of the half, and Ospreys controlled the game, attacking relentlessly but seeing no reward until scrumhalf Reuben Morgan-Williams scored under the posts to eat into the Warriors’ lead.

Despite being ahead, it would’ve been the visitors who expelled the biggest sigh of relief at half-time following a period of Ospreys pressure on Glasgow’s line.

The second half was an altogether different tale, with the Ospreys taking control early with a penalty goal, and despite a single three-pointer from the boot of Glasgow Warriors’ outside half Peter Horne, the visitors got nothing more out of the game.

Ospreys centre Keiran Williams showed brute force and pace to score the Ospreys’ second try of the evening, and an immaculate touch line conversion from Myler saw the hosts retake their lead. Another penalty goal from Myler saw the boys in black pull away from the Scotsmen, and would eventually see the game out with an impressive step up in physicality in the final ten minutes, despite being without lock Adam Beard, who was shown a yellow card.

Toby Booth, Ospreys Head Coach
"The most encouraging thing... was the character."

It was the Scotsmen in white that drew first blood at the Liberty, with Warriors fullback Jones and centre Nick Grigg breaking into the Ospreys 22, with the latter hauled down just shy of the try line, A spin of the ball wide to the left a few phases later saw Jones himself cross the whitewash for the opening try.

Ospreys responded immediately, however, with a crossfield kick from Ospreys outside half Stephen Myler finding his winger Mat Protheroe on the left wing, who cut inside once, twice, thrice before being stopped short of scoring a wonderful try. Glasgow Warriors infringed at the following breakdown however and Ospreys opted to kick at goal, which Myler successfully knocked over to cut the deficit to just two points.

Warriors ramped up the pressure on the ten-minute mark, making ground with their ball carrying, but the Ospreys defence held firm. A change in tactic rewarded the visitors with a lineout inside Ospreys’ 22, resulting from a kick to the corner. A maul from the lineout advanced with power, and Glasgow Warriors hooker George Turner burrowed his way to the try line from short distance. Glasgow’s outside half, Peter Horne, was successful with the conversion attempt to take his side up to 12 points as the clock neared the 20-minute mark.

A sustained Warriors assault was turned on its head when a fumble gave Ospreys centre Scott Williams an opportunity to thump the ball into space. Winger Protheroe hared after it and won a penalty for his side, which was thumped into touch by outside half Myler. A rare assault on the Warriors’ line ended with a confusing penalty to the visitors, who were able to relieve the pressure.

It took an individual piece of brilliance from Reuben Morgan-Williams to see the Ospreys over the line. The scrumhalf made a dazzling break through the defence and fed the ball to centre Keiran Williams, who very nearly carried two defenders over to score, but was held up by desperate Glasgow defenders.

From the resulting scrum, Morgan-Williams threw a subtle dummy and sliced through the defence again, but this time making it over the try line under the posts. Myler added the simplest of conversions, and the Ospreys were back within a single score.

Aggressive and disruptive play from the Ospreys back row led to a penalty, and the home team had one last chance to regain the lead before half time. But a steal at the breakdown meant the visitors survived the onslaught and held a narrow lead at half-time.

The momentum hadn’t diminished by the start of the second half, and within two minutes, Glasgow’s loosehead prop, Aki Seiuli, was caught offside, and Ospreys’ Stephen Myler kicked a long range penalty to give his side the lead for the first time that evening.

A call from referee George Clancey punished Dewi Lake for not showing a clear release before stealing the ball, and the Warriors regained the lead once more through Peter Horne’s boot.

An interception from Ospreys’ Dan Evans and the fullback was away, linking up with flanker Olly Cracknell and forcing the Warriors to scramble in defence. Ospreys replacement centre, Tiaan Thomas-Wheeler, making the most of the chaos in the ranks, chipped the ball ahead and Warriors winger Tommy Seymour had no choice but to take the ball into touch. From the lineout, Ospreys drove just inches short of the line before shifting the ball left to centre Williams who had too much pace and too much power for Seymour and Dobie, and scored the Ospreys’ second of the game.

Outside half Stephen Myler’s attempt from the touch line was successful, and the Ospreys held a five-point lead fifteen minutes into the second half.

Warriors failed to clear the tackle area quickly enough, and gifted Stephen Myler another shot at goal. The outside half gratefully accepted and notched up another three points to his, and his team’s, tally.

There was still work to be done, however, and Warriors fullback Jones made a clean break, finding himself clean through, before kicking a neat grubber to the corner flag for Niko Matawalu to chase. Ospreys winger Luke Morgan had no choice but to kick the ball over his own dead-ball line, and the visitors will get the scrum on Ospreys’ 5m line.

The visitors in white eventually cross the line through replacement Grant Stewart, but was held up by a tenacious double tackle from centre Thomas-Wheeler and outside half Myler. During that passage, lock Beard was deemed to have been offside and was shown a yellow card. The Ospreys would have to see out the remainder of the game with 14-men, defending an eight point lead.

However, the hosts upped their physicality in the final ten minutes, every tackle, ruck, and carry driving the Warriors backwards and following another scrum penalty, the Ospreys secured the ball and the ball was kicked to touch to bring the game to its conclusion. An Ospreys victory.

Man of the match: Adam Beard