The Ospreys suffered a first home Guinness PRO14 in almost a year as Glasgow, the last team to defeat them in Swansea, left the Liberty with a bonus point win for the second consecutive season.

Brandon Thomson opened the scoring for the visitors with just three minutes played, a straightforward three pointer after Ma’afu Fia was penalised at the breakdown.

There was an instant response from the hosts, a good kick chase at the restart forcing a knock-on and from the resulting scrum, first it was Rob McCusker and then Dan Evans stopped inches from the line before skipper, Cracknell, barged over from close range to score, Davies converting.

Within minutes Glasgow were back in front, the Ospreys failing to exit from a lineout in their own 22, Tom Habberfield’s kick charged down allowing the visitors to spin it wide where Matawalu, on for Ruaridh Jackson after just three minutes, was able to finish off the move. The conversion from Thomson was good and Glasgow led by three.

With just 15 minutes played Matawalu struck for his, and Glasgow’s second try of the night. There seemed little danger when Rory Hughes broke through some ineffective tackling in midfield, inside the Glasgow half, but the Ospreys failed to react and with the ever dangerous Fijian running a great support line there was no stopping him as he took DTH van der Merwe’s offload and went under the posts. The two points from Thomson took the scoreboard to 7-17.

Some good play from the Ospreys, with Cory Allen and Dirksen combining well to make some 40m progress between them was rewarded with a kickable penalty which Davies duly slotted to reduce the deficit to seven just before the half hour.

An entertaining contest was evenly balanced with both teams looking to keep the ball alive wherever possible, the Ospreys slowly starting to enjoy more territory and possession in the closing minutes of the half.

With time up, a scrum penalty to the hosts close to the touchline allowed Davies a shot at goal, but his kick never looked like finding the target which meant the Ospreys trailed by seven at the interval.

Davies did slot the three points six minutes into the second half, a simple kick from in front of the posts after some outstanding work by Dirksen to steal possession on his own 22 before going cross field to evade the tacklers and then straightening up to make a good 60m with ball in hand.

Back came Glasgow and three minutes later Matawalu was celebrating his hat-trick, hugging the touchline well to receive Thomson’s cross kick and score as Glasgow made the most of a penalty advantage. The angle of the conversion proved just too much for Thomson, his kick coming back off the near post.

The Ospreys needed the next score as they patiently probed left and right but, with 59 minutes played, it was Glasgow who struck the fatal blow, claiming their fourth try and the bonus point.

It seemed too easy as the Scots broke from inside their own half, off the back of a messy looking scrum and, with a three on one, it was a simple finish for Nick Grigg, Thomson with the extras.

The Ospreys were finally able to get some more points on the board with six  minutes remaining, Allen’s long punt from his 22 bouncing favourably for Dirksen to collect in his stride on the Glasgow 10m line, the winger racing clear to score his 34th try for the region.

Davies converted and the Ospreys pressed for one more, crucial score, but it wasn’t to be as Glasgow tightened their grip on Conference A as the Guinness PRO14 breaks for three weeks, with the small matter of Leinster at the RDS next up. 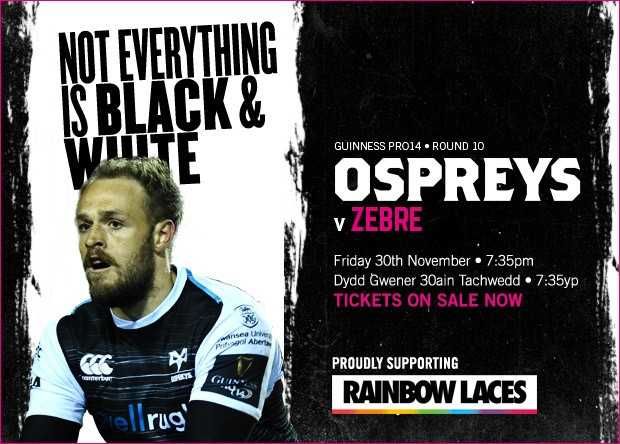