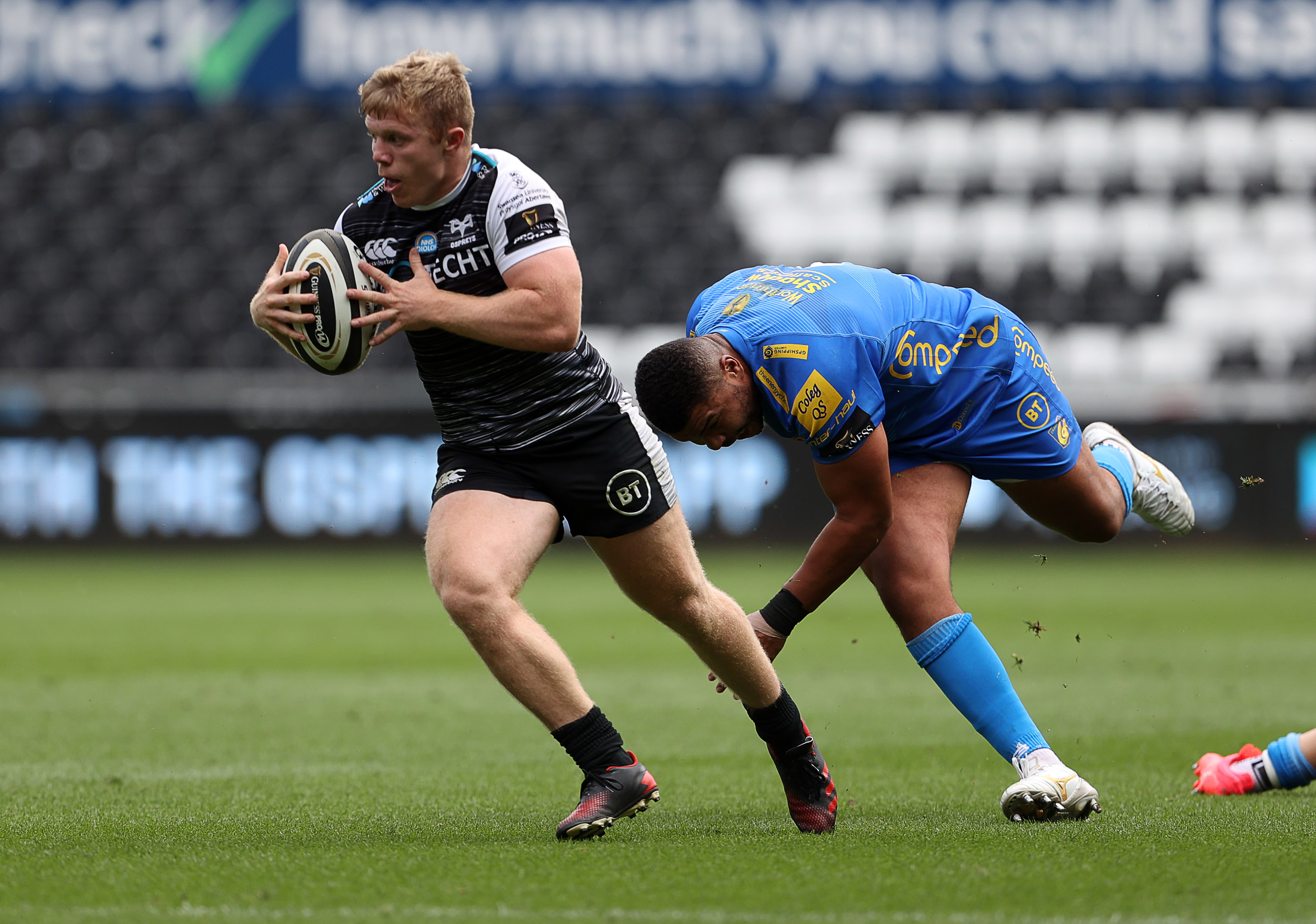 It was a bright and promising start for the Ospreys who defended aggressively and flustered the Dragons while in possession, coughing up possession regularly. Debutant outside half Stephen Myler got the scoring under way, claiming his and the Ospreys' first points of the game with a penalty.

The first try followed shortly after, after an almighty shove from the Ospreys pack in the first scrum of the game forced a penalty from the visitors. Alun Wyn Jones linked up beautifully with Sam Parry to open up the defence, causing carnage in the Dragons' ranks. The big lock was involved once more just a few phases later, presenting returning scrumhalf Rhys Webb with an opportunity to spin the ball wide in earnest for the first time. Myler got his hands on the ball and floated a pass out to fullback Dan Evans, who took the ball to the line before releasing winger George North on the right wing. The big winger used his mass to barge through the attempted tackle of Ashton Hewitt and grounded the ball firmly over the line. Myler sent the ball sailing between the posts from the touch line and the Ospreys found themselves with an early 10-0 lead after just seven minutes.

Unfortunately, the hard work was undone moments later as Dragons centre Jack Dixon wriggled out of a tackle to set up Ashton Hewitt for a score on the left wing, which outside half Sam Davies converted to chisel into the lead.

More misfortune struck the hosts from the following restart, as a winger North clattered into Hewitt in mid-air, causing the latter to land awkwardly on the ground. Referee Adam Jones deemed the offence worthy of a red card and the Ospreys had to see out the remainder of the game with just fourteen men.

Ospreys weathered a fierce storm from the Dragons as they pressed the line relentlessly, and despite some heroics from Tipuric to relieve pressure, Dragons' Leon Brown charged through a gap and scored Dragons' second try. Davies missed the conversion, but the visitors now enjoyed a 10-12 lead early in the second quarter. The lead would exchange hands once more as Myler nailed a second attempt at goal, nudging his team into a one-point lead with ten minutes yet to play of the first half.

A dazzling phase from the Ospreys released Kieran Williams down the right wing, but a last-ditch tackle denied the youngster from going all the way. Moments later, Olly Cracknell made a second line break and only a misjudged clear out at the breakdown relieved the pressure for the Dragons. But the assault was far from over.

A frantic and physical two minutes of rugby involving Morgan Morris, Dan Evans, Olly Cracknell and Owen Watkin caused chaos among the Dragons' ranks. Kieran Williams took full advantage of the confusion in defence and exploited a gap before finding hooker Sam Parry in support. Parry galloped in under the posts for a second try. Myler was accurate with the boot and the Ospreys extended their lead to eight points. A late Sam Davies penalty kept the visitors within touching distance and brought the first half to a breathless finish.

Sam Parry thought he had snagged a second after a successful disruption of the Dragons' lineout but was denied the referee who judged it was held up before being grounded. The second half was a tense and edgy affair, the Dragons unable to make their numerical advantage count. The final quarter saw the Dragons laying siege to the Ospreys line, but it held firm wave after wave as the opposition were repelled repeatedly from close range. In a cruel twist of fate for the hosts, however, after finally breaking free from their own line and pushing the hosts back into their own half, it was a long range attack that allowed Hewitt to score in the corner.

Davies was unable convert from the touchline and the game ended in a 20-all draw.

After the dust settles there will be plenty of positives to take from the game. A host of homegrown youngsters shone amidst the battle, with Kieran Williams catching the eye with powerful surges in the midfield and earning the Man of the Match award. Dewi Lake made an impact off the bench with his physicality and tenacity, and honourable mentions too for Josh Thomas who made his Ospreys debut off the bench, Reuben Morgan-Williams, Tiaan Thomas-Wheeler, and Will Griffiths, all of whom gave a glimpse into the future of the Ospreys.