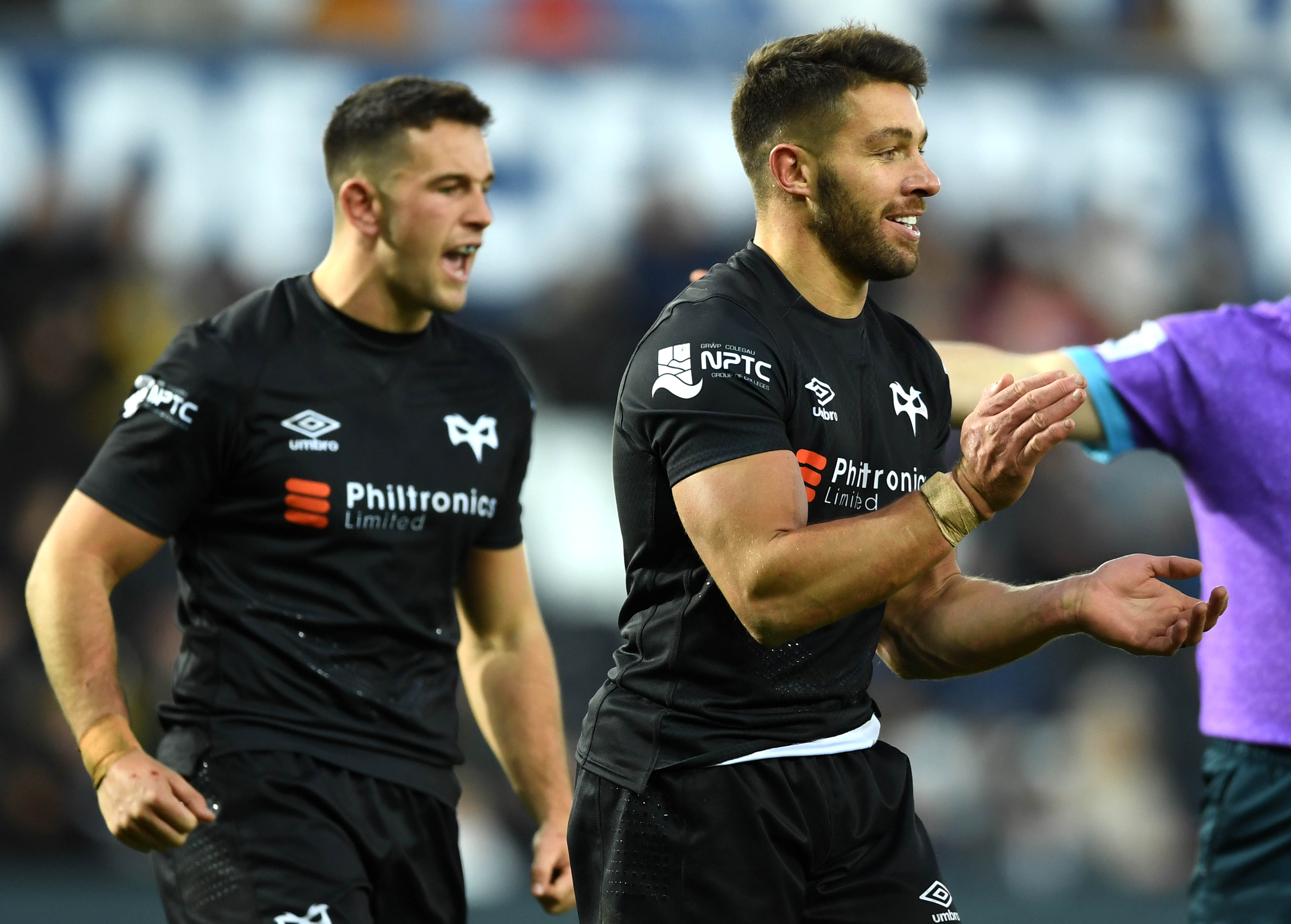 It was a bruising first half between Ospreys and the Ulstermen, as the visitors drew first blood with a penalty try after some ill discipline out on the left wing. Ospreys outside half and Ulster scrumhalf John Cooney traded blows with a penalty each, before Ospreys number eight Morgan Morris crashed over for his side’s first try of the afternoon.

Myler added a another penalty before the break and ensure the hosts were in the lead at half time.

Ospreys take the lead into half time

Ulster got the upper hand early in the second half with a penalty goal soon after the teams had run out onto the field. But two further penalties in response from Myler and the Ospreys successfully defended the six point lead despite some fierce offensive play from the visiting Ulstermen.

Toby Booth, Ospreys head coach
“They threw the kitchen sink at us and we stood together and I’m very proud of the effort the boys put in tonight"

Morris, having taken a well earned try in the first half, was excellent once more in the second half with some crucial turnovers and robust defence. The youngster was deservedly awarded the Player of the Match, leading the charge in what was an excellent bounce back following last week’s defeat.

🗣️ "We let ourselves down last week, we weren't proud of that performance wearing an Ospreys jersey so we knew we had to open up a performance for ourselves." pic.twitter.com/03TiwIfida

The opening five minutes saw Ulster with the lion’s share of possession and territory, as they probed the Ospreys defence. But the line held strong until the hosts conceded a penalty just inside their own half and Ulster soon found themselves five metres out of the try line. But the Ospreys slammed the door on any try scoring opportunities, turning the ball over and clearing their lines efficiently.

However, a desperate defence out on the wing saw referee Sam Grove-White award Ulster a penalty try and show winger Luke Morgan a yellow card; so the Ospreys would be down to 14 men until at least the 25 minute mark.

Ospreys struck back two minutes later, with some strong carrying from lock Rhys Davies and flanker Jac Morgan, before Ulster yielded a penalty that Myler converted into three points for his team. Just four points the deficit on the eighteen-minute mark.

Ulster scrumhalf John Cooney added three points to his own tally a few minutes later after a penalty against the hosts at the breakdown.

Max Nagy took a knock in the midfield and was replaced by returning international Gareth Anscombe.

A thunderous maul from the Ospreys drove the Ulster pack into reverse, and a powerful carry from number eight Morris was rewarded as a try as the youngster barrelled over carrying defenders with him. Myler’s conversion was pin perfect and the Ospreys drew level with a little under seven minutes left on the clock.

Ospreys had the bit between their teeth following the try, and more aggressive carrying forced Ulster backwards once more and they gave away another penalty just inside their 10m line. A familiar sight as Myler stepped up to the tee once more, and effortlessly nudged the ball between the uprights, taking the Ospreys into the lead for the first time in the game.

Ulster looked like they were about to respond with ruthless efficiency but fell at the last hurdle as the Ospreys forwards piled into the maul and prevented the ball from being grounded over the line, and earning themselves a scrum, and held on to the lead as the first half came to an end.

Ulster came out at half time firing, but a heroic defensive set from the hosts kept Ulster out.

A penalty to Ulster on halfway granted the visitors an opportunity to kick to the corner, and the men in yellow won a lineout just inside Ospreys’ 22m line. Ospreys yielded a penalty for a high tackle and Ulster took full advantage through Cooney’s right booth, drawing the game level after twelve minutes of the half.

Ospreys retook the lead on the hour mark with a penalty goal scored from the tee by Myler, following a penalty for not rolling away at the ruck.

Less than five minutes later, the Ospreys scrum, which had been dominant all day, reaped another penalty and once more Myler stepped up to try and convert the penalty. The attempt was good and Ospreys extended their lead to six points with a little under fifteen minutes remaining on the clock.

Ulster refused to roll over, however, and assaulted the Ospreys line time and time again. But the defence from the Ospreys was stubborn and some crucial turnovers from number eight Morris as well as a game saving intervention from winger Morgan, ensured the Ospreys kept the Ulstermen at bay and came out on top after a physical encounter at the Swansea.com Stadium.