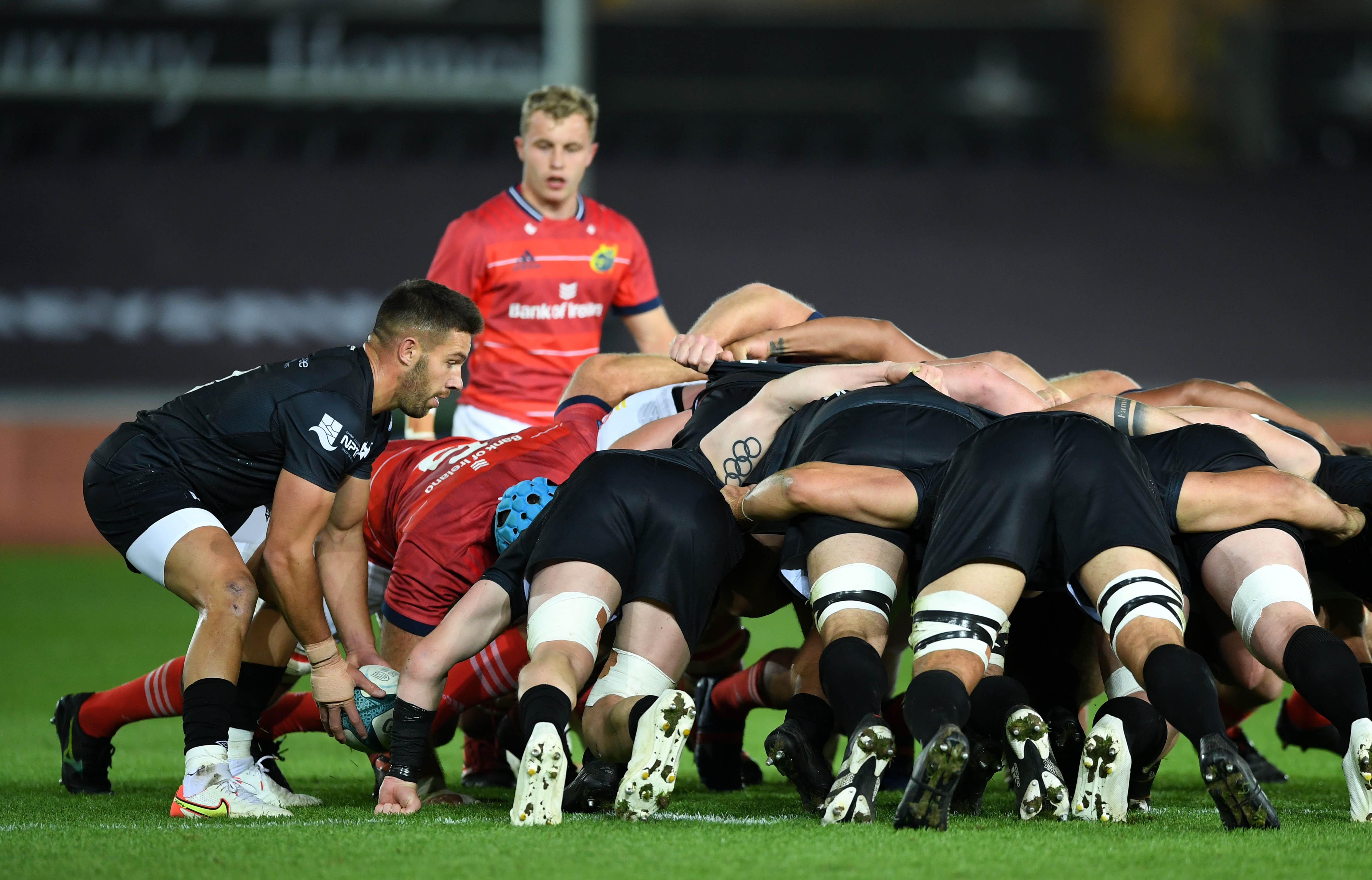 Ospreys headed into this big fixtures against the Irish province on the back of a dogged and triumphant performance out in Treviso, and sitting in fifth place in the URC table. Munster were four from four and looking to remain unbeaten in the competition.

It was a clear, cold, but importantly, a dry night in the Swansea.com Stadium. A perfect evening for a game of rugby.

Ospreys outside half Stephen Myler, and Munster outside half Jack Crawley exchanged penalties in the opening skirmishes. Both sides had a crack at the other’s lines but neither were able to cross the whitewash, although Munster’s hooker Niall Scannell came close, denied by miscommunication at the lineout. Myler added a second penalty in the second quarter to edge his side into the lead, and added a third a few moments later after referee Hollie Davidson awarded the hosts a penalty.

Munster had an opportunity to retaliate in the dying minutes of the half, but an outstanding defensive play from the Ospreys first drove the Munster pack into reverse at the scrum before securing the ball and hoofing the ball into the stands to end the half.

Rhys Webb
“It’s only the start. We need to maintain this performance.”

The second half was just as physical and bruising as the first, with ospreys outside half Myler getting the scoreboard ticking early in the half with a fourth penalty. Munster struck back and eventually got their maul over the whitewash, allowing Munster scrumhalf Craig Casey to plunge over the line and narrow the deficit to just two points. Munster’s ill-discipline cost them another six points in the latter stages of the game, with Myler converting both opportunities from the tee to extend Ospreys’ lead to eight points with less than ten minutes remaining.

Two long range efforts from replacement outside half Ben Healy were unsuccessful, and Munster had no answer to the Ospreys pressure. The Irish side would return to Limerick with nothing to show for their efforts, and their winning streak broken on the Swansea soil.

The Ospreys were playing towards the west in the first half and an excellent chase from the kick-off and prop Nicky Smith granted his side a shot at goal with an excellent turnover. Myler secured the first points of the game on the 90 second mark.

Munster took no time to go on the attack and a pinched lineout in the Ospreys’ 22 yielded a solid attacking platform, which resulted in a penalty to Munster which young outside half Crowley converted to level the scores in the 6th minute.

13 minutes in, Ospreys are pinged for not rolling away from the ruck and Munster kick to the corner for another assault on the hosts’ line. The maul rumbled on in the right-hand corner and hooker Scannell had a clear opening to ground the ball over the try line. However, the TMO intervened to highlight crossing at the lineout and Ospreys escaped unscathed.

A period of attack from the Ospreys, asking questions of the Munster defence, resulted in a defensive lineout on Munster’s 5m line. The visitors in red looked like they might’ve lost the battle at the breakdown but successfully cleared their lines.

Ospreys got the crowd to their feet after hammering through Munster’s defence, with the likes of Keiran Williams, Alex Cuthbert, and Nicky Smith making real headway against the red tide, and eventually forcing a penalty that Myler converted right in front of the posts to double the Ospreys’ score to 6-3 with a little under 10 minutes of the half to go.

With four minutes remaining, Myler added a third to extend the lead to 9-3, following a penalty at scrum time. However, Munster responded as they often do, with a potent attack down the wing resulting in a late opportunity to steal the lead ahead of the interval. A monstrous drive at the scrum from the boys in black had the Munstermen rattled, scrambling to get the ball out, before Ospreys openside Jac Morgan turned the ball over and gave Ospreys an avenue to relieve the pressure.

In the opening exchanges of the second half, Munster found themselves on the wrong side of the referee’s whistle once more at the scrum, and Myler lined up another shot at goal a few metres outside the opposition’s 10m line. The kick was true and Ospreys stretched their lead to 12-3 after five minutes.

Munster wrestled back the momentum after ten minutes, with a penalty going in their favour and outside half Crowley kicking them into an attacking position inside Ospreys’ 22. Munster’s pack, unable to outmuscle the Ospreys’ on their own, call in the cavalry and all but three of the Munster team add their weight to the maul to get over the line. Scrumhalf Craig Casey was the man to get over the line, and Crowley curled the ball inside the posts to bring the game to within 2 points, 12-10.

Ospreys looked for all the world like they were going to power over from short range as the forwards hurled themselves against Munster’s defence, the tackles kept coming but eventually they yielded a penalty in front of the posts. Myler took responsibilities and added another three to his tally to take the Ospreys 5 points clear with fifteen minutes left to play.

With ten minutes left on the clock, the Ospreys were awarded another penalty and once more Myler showed great composure to slot the attempt and take his side eight points clear. With barely two minutes left on the clock, Munster were awarded a penalty just inside their own half and young Ben Healy steppe dup to take the kick. It would’ve been a monstrous effort, and despite having the legs, the ball drifted wide, guaranteeing the Ospreys a victory as the clock ticked into the final seconds of the game.

However, with the clock having struck 80, and the game secured by the ospreys, Healy pointed at the posts for another shot at goal, almost 60 metres out, but right in front of the posts. However, this final effort also went awry and Munster would leave the Swansea.com Stadium empty handed, and with their winning streak broken.